Department of Justice Announces Investigation of Phoenix Police Use of Force 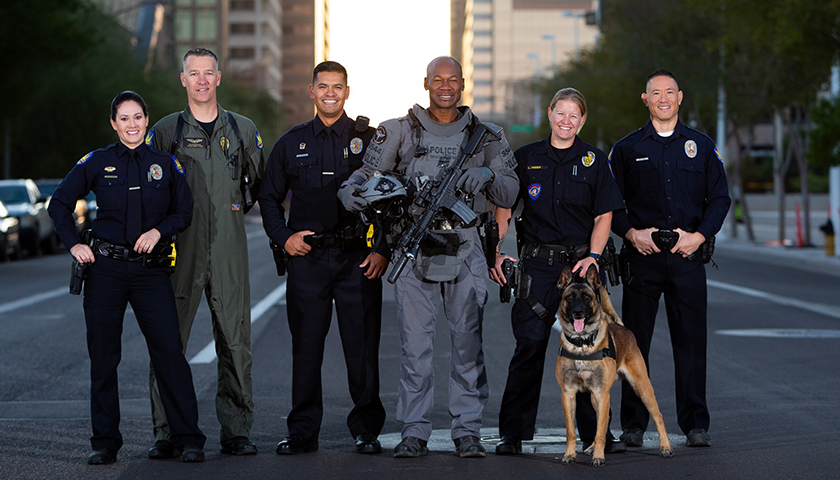 The U.S. Department of Justice (DOJ) has opened a pattern or practice investigation into the City of Phoenix and the Phoenix Police Department, according to Attorney General Merrick B. Garland and Assistant Attorney General Kristen Clarke for the Civil Rights Division on Thursday.

The Special Litigation Section of the DOJ Civil Rights Division will conduct the investigation. It will assess force used by Phoenix officers, including deadly force, the DOJ said in a press release. They said they would investigate whether PhxPD engages in retaliatory activity against people for conduct protected by the First Amendment if PhxPD engages in discriminatory policing and whether PhxPD unlawfully seizes or disposes of the belongings of individuals experiencing homelessness.

The DOJ said the investigation would additionally examine Phoenix practices for responding to people with disabilities. They will review policies, training, supervision, force investigations, and PhxPD’s accountability systems, such as misconduct complaint intake, investigation, review, disposition, and discipline.

Federal investigators informed Phoenix Mayor Kate Gallego, PhxPD Chief Jeri Williams, and other city officials. The DOJ said it would be reaching out to community groups and members of the public to learn about their experiences with PhxPD as an aspect of the investigation.

“When we conduct pattern or practice investigations to determine whether the Constitution or federal law has been violated, our aim is to promote transparency and accountability,” Attorney General Merrick Garland said in the press release. “This increases public trust, which in turn increases public safety. We know that law enforcement shares these goals.”

The investigation is being conducted under the Violent Crime Control and Law Enforcement Act of 1994, which prohibited state and local governments from engaging in a pattern or practice of conduct by law enforcement officers that deprives individuals of rights protected by the Constitution or federal law, according to the DOJ. This marks the seventy-third investigation of a law enforcement agency under the statute.

In a press conference responding to the investigation, Phoenix City Manager Ed Zuercher said that the PhxPD and the city would cooperate with all requests made by the DOJ.

He told members of the media that the DOJ investigation would “provide one more avenue toward making Phoenix a safer, stronger place for all residents, workers, visitors, and our police department.”

Williams said that every police department, including Phoenix, has room for improvement. However, she expressed her confidence in the department’s ability to engage with the investigation and her willingness to embrace changes.

“We’re not afraid to embrace anyone coming in making an outside assessment of our agency, and wherever the gaps are, we’ll figure those gaps out and we’ll get to become a better police department,” she told reporters.

Williams expects that the DOJ will see the numerous reforms the Phoenix Police Department has passed in the past year, such as the implementation of body-worn cameras.

Zuercher said that he has faith in members of the Phoenix Police Department.

“I know that good officers do not want to work in a system that allows bad practices, and our community expects and deserves a high quality police department with officers committed to justice, fairness and respect,” he said.

Phoenix Mayor Kate Gallego said in a press release that she too welcomes the DOJ investigation.

“Comprehensive reform of policing in the City of Phoenix has been my priority since the first day I took office,” she said. “The recommendations that will result from this review will assist us in our ongoing efforts to become an even safer, stronger, more equitable city.”