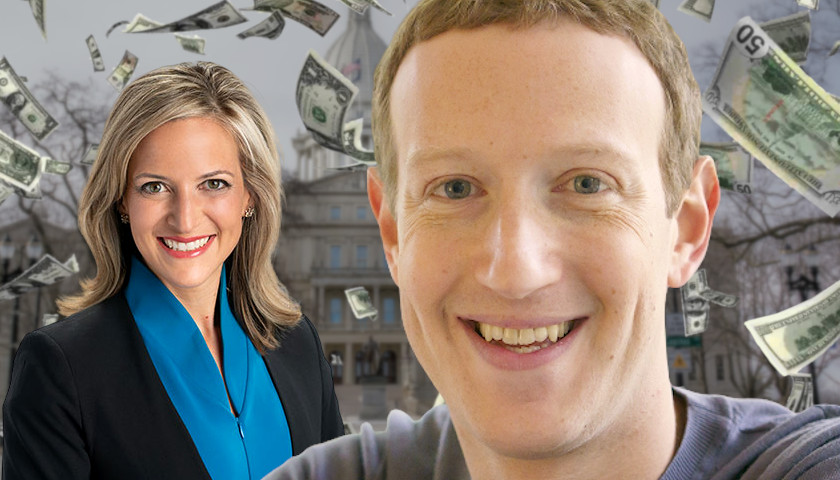 Ninety-nine percent of the $12 million grant – more than $11.8 million – was used to pay two highly partisan Democrat political consulting firms, according to the Michigan Center for Election Law and Administration (MCELA) Form 990 for the year 2020 filed with the Internal Revenue Service in May of this year.

In the MCELA Form 990, the non-profit reported that it had started the year with zero (0) dollars of cash on hand and had received zero contributions in 2019. But then in 2020, it received $12,040,000 in “contributions and grants,” namely the huge one-time gift from the Center for Election Innovation and Research (CEIR).

There were only two expenditures reported in 2020 by MCELA, both for “media strategy and purchase.” The biggest, for $9,799,407, went to Waterfront Strategies in Washington, D.C., a firm that specializes in handling media buys for Democrat and left-wing interest groups. Waterfront Strategies is an in-house subsidiary of GMMB, the largest Democratic consulting firm in the United States. GMMB was instrumental in electing Barack Obama and countless other Democrat office holders.

The remaining $2,088,000 in reported expenditures went to Alper Strategies of Grosse Pointe, Michigan, which is also a Democrat controlled organization. Founder Jill Alper was previously the political director and coordinated campaign director of the Democratic National Committee.

No member of the board of directors – including President Jen McKernan – received any compensation, so no one one was apparently paid to manage the two Democratic political consulting firms who were paid $11,887,407 to “educate voters.”

This unusual arrangement suggests that MCELA was merely a pass-through vehicle to get the funds to the Democratic political consulting firms, and that no one had oversight authority over how they spent the funds.

Considering that the declared purpose of the MCELA on its most recent annual report is “nonpartisan voter education,” it raises questions – at the very least – why the nonprofit spent all its money on high-powered Democrat consultants.

You can read the 24 page Form 990 filing for the year 2020 for the Michigan Center for Election Law  and Administration (MCELA) here:

What has previously been painted as an innocent nonpartisan effort to increase voter turnout in the 2020 election in Michigan has all the signs of actually being a partisan Democratic operation, which throws the state’s narrow Biden victory in 2020 into some doubt.

Michigan Secretary of State Jocelyn Benson praised the grant given to the MCELA as a way to fund crucial voter education, and even suggested that the multi-million-dollar media campaign would somehow improve election integrity.

Benson was the founder and longtime president of the MCELA, the recipient of the grant, although somehow that connection was never promoted by either the secretary of state’s office or the nonprofit itself. But it raises questions of conflict of interest that need to be answered.

Between Oct. 5 and Oct. 28, the MCELA posted a total of 10 times to its Facebook page. The first three posts were simply the result of loading profile pictures and a cover photo. On Oct. 8, the profile picture on the account was changed to a portrait of Benson. Then silence until Oct. 28, one week before Election Day. On that day, six posts featuring Secretary of State Benson were posted, including two copies of the same 30-second video, and three images of would-be voters featuring the posted words of Benson.

“These are uncertain times for all of us, but one thing is certain. Your vote will count. I’m Secretary of State Jocelyn Benson and you have many secure options to vote this fall.” That’s how the 30-second spot starts. Then, with the remaining 17 seconds, Benson explains just how easy it is to vote in one of three ways.

As Breitbart News reported in October, Facebook founder and CEO Mark Zuckerberg and his wife Priscilla Chan donated $419 million to two non-profit groups that provided controversial private funding to state, county, and municipal governments for “election administration” at the county and state level in the 2020 presidential election.

$350 million of Zuckerberg’s money went to the Center for Technology and Civic Life, which privately funded county and city level election operations, and spent at least $7.6 million in key Michigan counties.

The revelation that $11.8 million from the Zuckerberg-funded CEIR was used to pay two highly partisan Democrat political consulting firms in Michigan in 2020 drew the attention of a national expert on election integrity.

“The left funneled hundreds of millions of dollars through scores of pop-up non-profits in the 2020 election to turn government election offices into partisan political campaign offices to benefit Biden’s candidacy,” Phill Kline, executive director of the Amistad Project of the Thomas More Society told The Star when informed of the $11.8 million paid to two partisan Democrat political consulting firms as part of the 2020 Michigan election administration grant:

These funds empowered illegal activities that turned formerly objective government offices into Biden campaign satellite offices. There was not a person in a closet printing ballots during the election, rather there were billionaires in the counting room hacking the election from within by taking over government election offices and procedures. The 2020 election was managed by private interests for private interests. American elections will not reflect the will of the American people unless this is stopped now!

MCELA was formed in 2008, under the original name of The Richard Austin Center for Election Law and Administration, by Jocelyn Benson, the highly partisan Democrat who was elected Michigan Secretary of State in 2018. In 2009, Benson removed herself as MCELA’s registered agent, possibly because she was running for secretary of state that year. She was replaced as president by Tierney Eaton, a 2008 graduate of Wayne State Law School, where Benson was on the faculty and later served as dean. Wayne State’s website still notes that “Benson is founder and executive director of the nonpartisan Michigan Center for Election Law, which hosts projects that support transparency and integrity in elections.”

MCELA does not appear to be a “nonpartisan” organization. Benson, who has run as a Democratic candidate at least since 2010, was president of the nonprofit from 2011 through at least February of 2020 when the group’s secretary filed an annual report certifying that there had been no changes since the previous report in 2019 that listed Benson in the executive role. For some reason, Benson did not see fit to remove herself from the board when she ran for secretary of state in 2018, as she had done 8 years previously.

Benson has been the Democratic secretary of state since January 2019, at which time she was still on the board of MCELA. Her assistant secretary of state, Heaster Wheeler, also served as a director of the MCELA from sometime in 2018 until at least Feb. 28, 2020.

It wasn’t until the 2020 annual report for MCELAwas filed with the state of Michigan in September 2020 that it became clear Benson and Wheeler were no longer on the board. That same month, September 2020, the Zuckerberg-funded CEIR announced it was giving the state of Michigan $12 million, part of its nationwide “Voter Education Grant Program to support states’ efforts to provide nonpartisan, accurate, and official voting information to the public.”

Twenty-two other states received CEIR grant money, but Michigan was apparently the only state where the funds went to a nonprofit organization, rather than the office of the Secretary of State.

The final CEIR report, released on March 26, 2021, described how MCELA spent the $12 million grant in Michigan, but it did not offer an explanation as to why MCELA, rather than the Secretary of State’s office, received the funding:

In addition to a statewide messaging campaign, Michigan sent out targeted mailings to engage voters. Active registered voters received information about ways to vote, elections deadlines and how to request a mail ballot, and those who had not yet returned their mail ballot received instructions on how to do so. Grant funds also helped communicate changes in election laws to voters.

According to Michigan Secretary of State Jocelyn Benson, the state’s low rate of ballot rejection this year was directly attributable to CEIR’s voter education grant

In an interview with Michigan public radio, the president of MCELA in 2020, Jen McKernan, explained how the $12 million would be spent. As recounted by Michigan Radio reporter Tracy Samilton:

The initiative will air ads on television and radio across the state.  The campaign will also send direct mail and text messages to people who have never voted before, or who have not voted in a long time. McKernan says people who are being deluged with those kinds of text messages can get rid of them by simply voting.

The targeted use of text messages means that the only way to ascertain the non-partisan nature of the campaign is to know where the phone lists for the text messages originated. If they were provided by Waterfront Strategies or Alper Strategies, they could have been lists of potential Democrat voters.

The text messages were intentionally sent to spur voting. As told by McKernan to Samilton, “once you vote, all those groups urging you to get to the polls will be informed by elections officials that you’ve done it, and the messages will cease.”

Not only could the list of potential voters be targeted to one party or the other, but it would also apparently be evident which voters had responded to the campaign, thus giving a partisan firm like Waterfront Strategies a pretty solid idea of how many votes had been stockpiled for their preferred candidate.

According to public records accessible at Opensecrets.org, four out of the five of the current board MCELA members are also repeat Democrat donors.

Treasurer Ned Staebler has donated money to Whitmer, Sen. Gary Peters, former Gov. Jennifer Granholm, Hillary Clinton and Squad member Rep. Rashida Tlaib – all Democrats. He also gave $1,000 to the Michigan Democratic State Central Committee in 2018. Oh yes, and in 2010 he also donated $500 to Jocelyn Benson, none other than the current secretary of state in Michigan, who sang the praises of the Michigan Center for Election Law and Administration prior to and after the flawed 2020 election.

Secretary Kimberly Trent, is listed as having worked for Democrat Sen. Debbie Stabenow and donated to the Michigan Democratic State Central Committee as well as to individual Democratic candidates such as Rep. Debbie Dingell. In 2019, she donated $500 then-Sen. Kamala Harris (D-CA) during her failed presidential candidacy.

The fourth member of the board, Jill Farber-Bramson, is listed on the annual report as serving part of the year. Based on her record at opensecrets.org, we may surmise that she’s busy the rest of the year promoting Democratic candidates. She shows a staggering 73 donations over the last 15 years, including to Whitmer, Schauer, Granholm, Hillary Clinton, Rep. Elissa Slotkin , and Secretary of State Jocelyn Benson.

There is no evidence at opensecrets.org that the fifth member of the board, Dee Dee Coleman, a Detroit pastor, is a political donor.

In light of this report, The Star is contacting members of the Michigan Legislature to determine if there will be an investigation to find out exactly how the MCELA spent its $12 million and what exactly it was buying.

Senior investigative reporter Frank Daniel Miele is the author of “What Matters Most: God, Country, Family and Friends.” Visit him at HeartlandDiaryUSA.com to read his archived commentary or follow him on Facebook @HeartlandDiaryUSA or on Twitter or Gettr @HeartlandDiary.