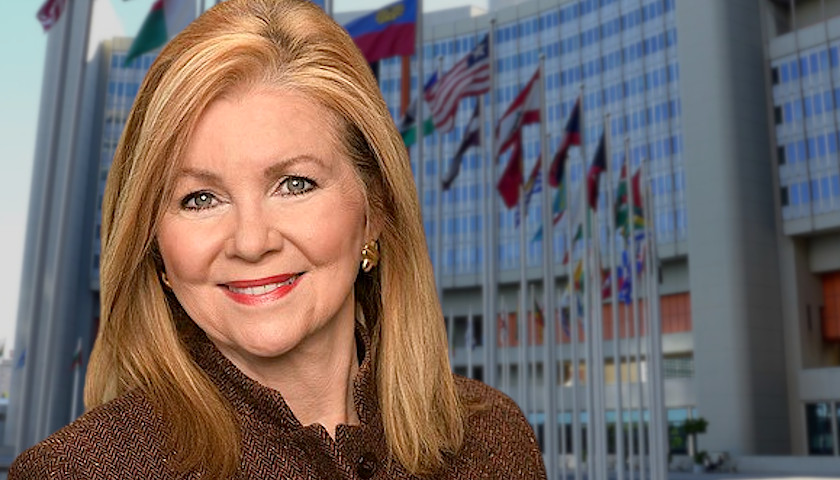 The legislation is designed to contravene “malign influence, require transparency, and promote accountability within the United Nations system.…” Speaking for the bill, named the “United Nations Transparency and Accountability Act,” Blackburn and McCaul focused particularly on its intended effect on China’s position on the world stage.

“Authoritarian regimes, such as the Chinese Communist Party, cannot be allowed to continue their uncontested malign activity at the United Nations,” said Blackburn in a statement. “My legislation… will strengthen America’s influence as a key UN member nation and expose the threat adversarial countries pose to international organizations. This work is critical to holding authoritarian regimes accountable for their relentless campaigns against democracy and human rights.”

McCaul said “key reforms are necessary to increase transparency and ensure accountability” at the UN. Policy changes made by the bill he and Blackburn are sponsoring include: requiring the secretary of state to report on UN member nations that engage in underhanded influence operations that violate the UN charter, enabling the president to designate such nations “malign global actors,” increasing the number of junior U.S. officers assigned to posts in international organizations and strengthen reporting requirements for American contributions to the UN.

Tennessee’s senior senator has been a vehement critic of China’s global influence-peddling, having published a comprehensive list of policy recommendations toward curbing it last July. In a Senate floor speech this week, she denounced the nation’s “Belt and Road Initiative,” a program to enhance transportation infrastructure throughout Asia, southeastern Europe, the Middle East and Eastern Africa. The Belt and Road projects, she said, will put many debtor nations where the construction will take place under Chinese sway.

“The Chinese Communist Party [CCP] has sunk its teeth into some of the most valuable tourist destinations on the face of the earth, on trade routes and strategic outposts,” Blackburn said. “They’ve sold this program as an economic development initiative, but in reality this debt-trap diplomacy is really just an extortion scheme. Once these countries fall into the trap, it is almost impossible to escape.”

The senator furthermore raised concern about Beijing’s hosting of the Winter Olympics next February and China’s spearheading of a digital currency that she said could undermine other cryptocurrencies.

She said it is worrisome that China has made plans to expand testing of the digital yuan’s use at the 2022 Olympics. In particular, she is concerned that China’s doing so will allow it to surveil more Chinese citizens as well as many international visitors.

“It wouldn’t be the first time something like this happened,” Blackburn said. “The CCP has an unfortunate history of weaponizing emerging technologies against people they would like to control.” She cited members of China’s Uyghur minority and Hong Kong, a former British colony transferred to China in 1997, as victims of such actions in the recent past.

Blackburn has formally asked the U.S. Olympic and Paralympic Committee to prohibit American athletes from utilizing or accepting the Chinese cryptocurrency during their time in Beijing.