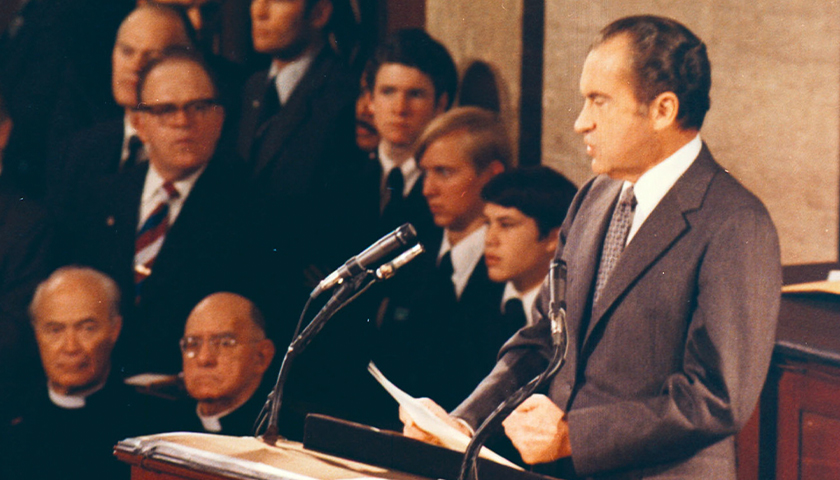 As the 50th anniversary of the 1972 election approaches, it is time to reconsider the Watergate controversy that preceded and ultimately partially undid it. I’ve just completed a review for the New Criterion of Michael Dobbs’ new book about Watergate, King Richard. The book repeats endlessly, without any attempt at substantiation, that the Nixon presidency came apart and was righteously legally assaulted because of the infamous “cover-up” consisting mainly in the “hush money” Nixon authorized to be paid to Watergate defendants in order to “keep them quiet.” Once again, and as always, not one whit of evidence was presented in support of the argument that Nixon authorized these payments for any such purpose. It has passed into the universal history of the modern world that he did, but he always denied it. So did some of the defendants, and an exhaustive examination of the very extensive tapes and documents permits a different interpretation.

To the end of his life, Nixon claimed that he authorized the payments in order to assist the defendants in paying their legal bills and taking care of their families. This was particularly urgent in the case of Howard Hunt, whose wife died in an airplane crash shortly after the Watergate affair began. Nixon foresaw the zeal of hostile prosecutors and he knew that any jury in the District of Columbia would be hostile to Republicans. Moreover, as an experienced lawyer, he certainly knew that any large payments to groups of defendants obviously in exchange for silence or false testimony would be an open-and-shut case of obstruction of justice, and would qualify as a high crime justifying his impeachment, removal as president, and subsequent criminal prosecution. Yet this allegation is the core both of the impeachment charge against Nixon in 1974 and of the popularly accepted and endlessly repeated Watergate saga.

It is certainly time that Richard Nixon received balanced historical treatment. He must, of course, take principal responsibility for the disgrace and embarrassment of Watergate; he permitted, and at times encouraged, a tawdry atmosphere within the White House in which legalities were often treated a bit casually and Nixon rather self-servingly applied the Truman-Eisenhower latitudinarian version of national interest and the president’s practically unlimited right to define it. These were terrible tactical errors and no one can deny that Nixon paid heavily for them. But against that, and despite the fact that he was the first president since Zachary Taylor in 1848 to take office with neither house of Congress in the hands of his own party, Nixon enjoyed one of the most successful single terms in the history of the U.S. presidency.

He ended the almost constant rioting and skyjackings that racked the country, completed the desegregation of schools without having to implement the court-ordered bussing of tens of millions of children all around metropolitan areas out of their neighborhoods and against the wishes of their parents for racial balance; he founded the Environmental Protection Agency, reduced the crime rate, and ended the draft. And in foreign affairs he normalized relations with China, triangulated great power relations with the USSR, started the de-escalation of the Cold War, and signed the greatest arms control agreement in the history of the world with the Soviet Union.

He extracted the United States from the Vietnam War while maintaining a non-Communist government in Saigon which would have had a chance of survival if the Watergate crisis had not prevented him from resuming aerial bombardment of the North when that country, as had been expected, violated the peace agreement and resumed its invasion of the South. These are the reasons, and not any minor political skulduggery, that President Nixon was reelected by 18 million votes in 1972, a plurality that has not been approached in the subsequent half-century even though the electorate has grown steadily larger.

Bob Woodward and Carl Bernstein are still active and apparently somewhat influential commentators on contemporary American politics and the absurdly antagonistic and muckraking treatment that they have frequently inflicted on some of Nixon’s successors must reflect on the credibility of their coverage of the Watergate affair that so durably influenced public and international opinion about Nixon.

Many readers will remember Woodward’s fabrication in his book Veil, a fable to resolve the Iran-Contra debacle by imagining that he had gained entry as a hospital orderly into the room of former CIA director William Casey and had extracted from him a confession of wrongdoing in that murky episode. Security for the room made that impossible and medical records clearly establish that Casey was comatose at the time. Woodward was given a free ride for his fairy tale. Almost all of his and his sidekick Carl Bernstein’s revelations about Watergate were the sour grapes of “Deep Throat” (Mark Felt), and most of that was just malicious gossip prompted by the source’s failure to be elevated to succeed J. Edgar Hoover as director of the FBI.

Bernstein has been considerably more egregious in slouching out of our television screens with alarming frequency throughout the Trump era. Bernstein in 2018 favored viewers with his alarm, unique to him as far as could be discerned, that the country was already in the midst of a “constitutional crisis” because Trump was trying to dismiss Justice Department officials who were investigating him. His entire competence to govern was undermined by mental instability, Bernstein contended, to the point that the 25th Amendment should probably be invoked.

On Sunday, Bernstein solemnly asserted to the porcine CNN Trump-hater Brian Stelter, that Trump is “an American war criminal operating within his own country,” and that “when we’re talking about Trump, we’re obviously talking about a kind of delusional madness.” On a gentle probing from Stelter, Bernstein elaborated that his status as a war criminal consists of his “crimes against humanity” which ”he has perpetrated upon our people, including the tens of thousands of people who died because of his homicidal negligence in the pandemic.”

Naturally, the fact that Trump probably saved millions of lives around the world with his facilitation of an early vaccine went unmentioned and his homicidal contact was not remotely identified. Bernstein continued, saying Trump’s “actions in terms of fomenting a coup in which to hold onto office and which the chairman of the Joint Chiefs of Staff has now compared . . .  to Hitler . . . to brownshirts, to the Reichstag fire.”

This is unspeakable and demented nonsense; certainly the chairman of the Joint Chiefs should be fired.

Conrad Black has been one of Canada’s most prominent financiers for 40 years, and was one of the leading newspaper publishers in the world as owner of the British telegraph newspapers, the Fairfax newspapers in Australia, the Jerusalem Post, Chicago Sun-Times and scores of smaller newspapers in the U.S., and most of the daily newspapers in Canada. He is the author of authoritative biographies of Franklin D. Roosevelt and Richard Nixon, one-volume histories of the United States and Canada, and most recently of Donald J. Trump: A President Like No Other. He is a member of the British House of Lords as Lord Black of Crossharbour.