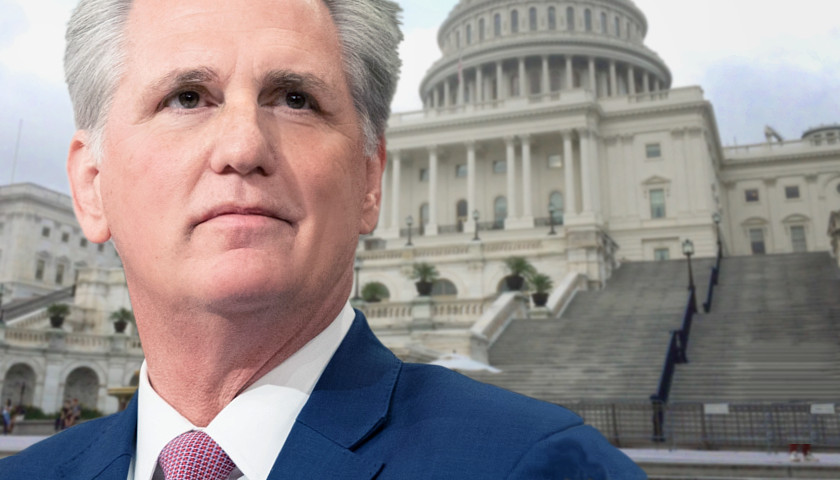 Members of the House Freedom Caucus threw down the gauntlet, ostensibly challenging Speaker Nancy Pelosi (D-CA-12) with the motion to vacate the chair or oust the California Democrat from her perch, but the real challenge was to House Minority Leader Kevin McCarthy (R-CA-23).

According to the House Calendar, the chamber holds votes next July 26 through July 30. Then, the House does not have votes scheduled again until Sept. 20.

The letter said the impetus for the action was the speaker’s rejection of two House Republicans McCarthy designated to sit on the special committee to investigate the Jan. 6 rally and march, where hundreds of protesters entered the Capitol building.

There were other reasons, too.

“Speaker Pelosi’s tenure is destroying the House of Representatives and our ability to faithfully represent the people we are here to serve,” the letter said. “Speaker Pelosi has championed unconstitutional changes like allowing proxy voting and insulting security measures like metal detectors for members coming to the floor to vote.”

House Freedom Caucus is calling on GOP leader to file and bring up a privileged motion to vacate the chair and end Speaker Pelosi’s authoritarian reign.

If McCarthy leads his conference to authorize such a step, the motion would be regarded as privileged and thus scheduled for a floor vote within two legislative days.

In some ways, this is another skirmish between McCarthy and the conservatives looking to block him from becoming speaker if Republicans take back the House in the 2022 midterms.

McCarthy’s strategy going into 2022 has been to avoid mistakes and to avoid conflicts, simply allowing the cyclical forces that buoy the party out of the White House during the midterms to do all the work for him.

House conservatives are getting frustrated with McCarthy going into the prevent defense in the first half with moves such as allowing the National Republican Congressional Committee to contribute to the reelection campaigns some if not all of the 10 House Republicans who voted to impeach President Donald J. Trump.

Media reports quoted McCarthy threatening to pull committee assignments from House Republicans, who voted to authorize the Jan. 6 committee, but when Rep. Elizabeth L. “Liz” Cheney (R-WY-At-large) and Rep. Adam D. Kinzinger (R-IL-16) both voted for the committee – McCarthy did nothing.

Nor did McCarthy act when Cheney and Kinzinger accepted seats on the Jan. 6 committee – from the same Pelosi, who rejected McCarthy’s picks of Jordan and Banks.

Today, I was asked to serve on the bipartisan January 6th Select Committee and I humbly accepted. When duty calls, I will always answer. https://t.co/MszEBc0V7I pic.twitter.com/flIdSfYzZV

Immediately after Pelosi rejected Rep. James D. “Jim” Jordan (R-OH-04) and Rep. James D. “Jim” Banks (R-IN-03), McCarthy did say he would not allow other Republicans to serve on the Jan. 6 committee – so Cheney and Kinzinger are now effectively caucusing with House Democrats.

House conservatives recognize the letter’s language well because it was July 28, 2015, when Freedom Caucus member Rep. Mark R. Meadows (R-NC-11) filed his motion to vacate the chair against his party conference’s own leader, Speaker John A. Boehner (R-OH-06). It was the last day of the session before the August recess – and Meadow’s birthday.

When Meadows filed his motion, the House rules allowed individual Members of Congress to file motions to vacate the chair – which would be a vote on the House floor as to whether a speaker holds his job.

After the 2018 midterms, House Democrats took over the chamber pushed through a change to the rules sponsored by Majority Leader Steny H. Hoyer (D-MD-05) so that the motion to vacate the chair can only be accepted if either one of the party caucuses authorized it.

All through August 2015, Meadows and his motion were dismissed as the product of swamp vapors, but when Republican congressmen got back to Washington after Labor Day – after being home with their constituents – they were ready to take Boehner down.

There was never a vote on Meadow’s motion because it was resolved at a meeting Boehner held with Jordan and Meadows, where they all agreed that Boehner would hold the gavel until after Pope Francis’s trip to Washington. The visit included the pontiff’s September 24, 2015 address to a joint session of Congress, and the Catholic Boehner was allowed to play the host and walk away rather than lose a showdown vote.

McCarthy opposed House conservatives in the fight to oust Boehner

Boehner’s No. 2 in the House GOP leadership was McCarthy, who was then, as now, the majority leader. Some conservatives reached out to Bakersfield, California, Republican, and asked him to stand as a challenger to Boehner.

In a statement to Politico, McCarthy said he stood with Boehner.

“We should be spending all of our time and energy confronting this administration’s disastrous policies,” he said to the outlet. “The intrigue and fighting amongst ourselves only makes it harder to get that done. It ought to stop immediately.”

Jordan founded the House Freedom Caucus in 2015 after he was ousted in a 2013 palace coup from his chairmanship of the Republican Study Committee by Scalise, who is still the party’s whip.

In the coup, Boehner used Scalise as the frontman. Boehner had grown weary of Jordan and his constant support of conservative agenda goals because Boehner and his House GOP leadership team were looking for ways to work with President Barack H. Obama Jr.

The first-order effect of the RSC coup was that Scalise integrated what had been the lower chamber’s conservative bloc into the formal House Republican Conference framework. No longer did the RSC push for an alternative conservative annual budget, and no longer were RSC leaders blocked from the GOP’s cursus honorum, as Scalise became the party whip and three of his next four successors took positions in House GOP leadership.

What should be frightening for McCarthy is that Banks, the current RSC chairman, has pushed the Republican Study Committee away from leadership and returned it to its insurgent roots – so much so that Meadows has vouched for him to other conservatives.

Suppose RSC and House Freedom Caucus are lined up together against McCarthy and the GOP leadership. In that case, it is the significant polar shift from the 2017-2018 congressional caucus with McCarthy and Speaker Paul D. Ryan (R.-Wis.) directed the RSC to give them cover as they blocked the repeal of the 2010 Patient Protection and Affordable Care Act, or Obamacare, and conservative agenda goals.

McCarthy is five seats away from being Speaker of the House

If anything, the fight inside the GOP House Conference over whether to authorize a motion to vacate the chair will bring to the fore how close McCarthy and the House Republicans are to taking over the chamber.

Today, the House has Democrats in the majority with 220 seats and the Republicans in the minority with 211 seats. There are four vacancies, two deaths, and two resignations evenly split between the parties.

Neil W. McCabe is a Washington-based national political reporter for The Tennessee Star and The Star News Network. In addition to the Star Newspaper, he has covered the White House, Capitol Hill and national politics for One America News, Breitbart, Human Events and Townhall. Before coming to Washington, he was a staff reporter for Boston’s Catholic paper, The Pilot, and the editor of two Boston-area community papers, The Somerville News and The Alewife. McCabe is a public affairs NCO in the Army Reserve and he deployed for 15 months to Iraq as a combat historian.