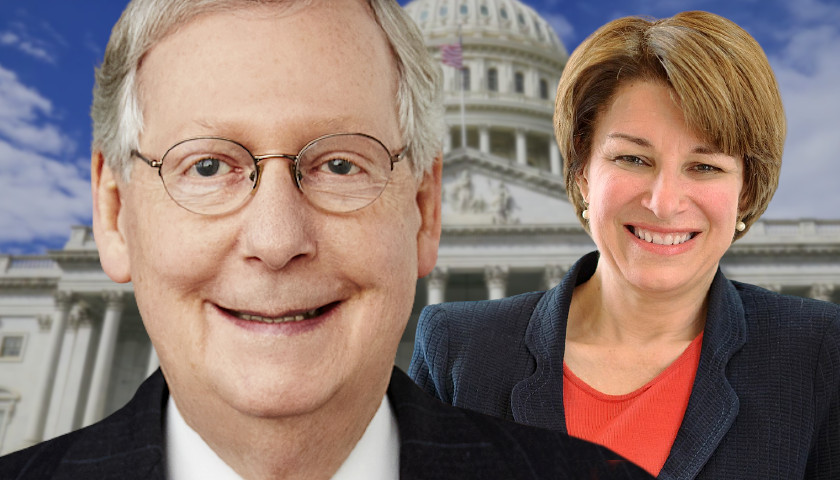 This, as Klobuchar and four other Democratic U.S. senators who attended refused to answer The Georgia Star News’ questions about other states whose voting requirements are stricter than Georgia’s.

According to The Daily Mail, McConnell described last week’s field hearing as a “partisan circus.”

“This silly stunt is based on the same lie as all the Democrats’ phony hysteria from Georgia to Texas to Washington D.C. and beyond — their efforts to pretend that moderate, mainstream state voting laws with more generous early voting provisions than blue states like New York are some kind of evil assault on our democracy,” McConnell reportedly said.

• Has your senator read Georgia’s SB 202 in its entirety? Yes or no?

Staff members for those five senators declined to answer either question.

Klobuchar left last week’s hearing believing she had uncovered “a smoking gun” that proved the law was a case of overreach. That “smoking gun” was testimony from Georgia State Sen. Sally Harrell (D-Atlanta). But Harrell’s words were refuted by another state legislator — a Republican — when The Star News contacted that man Monday.

The other U.S. senators at Monday’s hearing pounced against SB 202 as an instrument deliberately created by Republicans to confuse black people at the voting booth. They also compared the law to the old Jim Crow policies. Ossoff said last year’s presidential election in Georgia was a secure one, and he quoted Georgia Secretary of State Brad Raffensperger and Georgia Lt. Gov. Geoff Duncan — both Republicans — to defend his position.

U.S. Sen. Raphael Warnock (D-GA) also spoke against SB 202 and said it was the brainchild of “craven politicians.”

“What we are seeing in Georgia is [an effort] to deny certain people the right to vote heard in our democracy,” Warnock said.

“Some people don’t want some people to vote, so they’re trying to deny access to the ballot, to set up hurdles that voters have to cross as if voting is a privilege and not a right.”

SB 202 requires, among other things, voter ID on all absentee ballots and increased oversight of local election boards that fail to follow state election law.