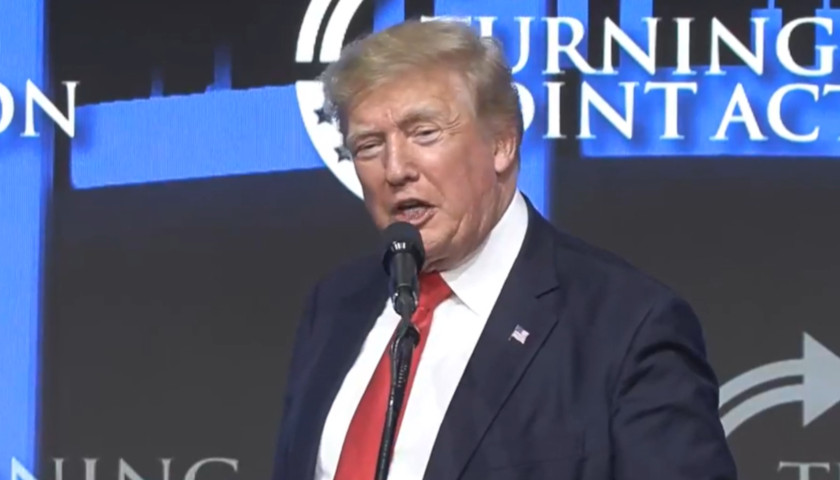 PHOENIX, Arizona – The Star News Network Wire Service – Former President Trump took the stage to thunderous applause at his rally in Phoenix, Arizona on Saturday, where he highlighted efforts across the country he said are needed to ensure the integrity of elections.

“Thank you to Charlie [Kirk] for that introduction which was so beautiful, and for   your fearless leadership at Turning Point Action and Turning Point USA,” Trump told the crowd as he began his speech at 3:55 p.m. Mountain Standard Time. 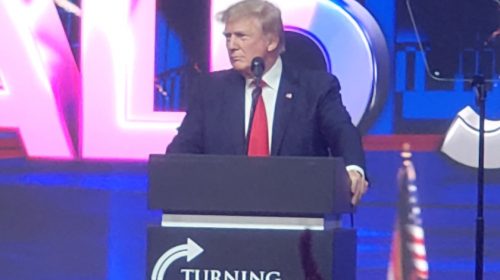 “Let me also express my appreciation to the thousands of bold, young, and proud American Patriots that are with us today. What a crowd, what a crowd … You are the pulse of our movement, you are the ones who will make America Great Again,” the 45th President of the United States added.

“Nobody’s done what we did in four years,” Trump continued.

“With your help, we will stand up for democracy and for justice. We will fight for truth, transparency, and accountability. And we will not stop until we have restored our American birthright of honest, free, and fair elections. We are gathered here in Phoenix to show our support for election integrity and for the brave and unyielding conservative warriors in the Arizona State Senate,” the former president continued.

“This is now starting all over the country,” Trump said.

“I’m hearing Texas wants to do a forensic audit. Even though I won Texas by a lot, I said you should do it,” he added.

“The 2020 election was a total disgrace,” Trump declared. That declaration was met with crowd chants of “You won,” followed by chants of “Trump, Trump, Trump.”

“This is the biggest issue there is. If you look at the death and destruction this election has caused. . . It was the most corrupt election in our history,” the former president added.

The “Rally to Protect Our Elections,” held Saturday at the Arizona Federal Theater, was hosted by Turning Point Action. The entire event spanned the majority of the day, running from 9 a.m. to 5 p.m. local time. (Most of Arizona, including Phoenix, is Mountain Standard Time year-round, which at this time of year is the same as Pacific Daylight Time.) 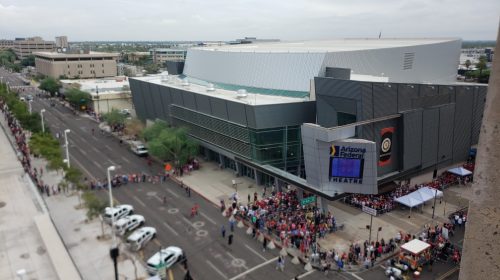 At 9 a.m. local time, the crowd of Trump supporters hoping to be able to get into the Phoenix Federal Theatre had grown from a few dozen Friday evening to stretch around the right of the venue, down two blocks behind the theater, wind around the front, cross the street at the beginning of the line, and wrap back on itself on the opposite side. Law enforcement’s early estimates were over 10,000 people, for a venue that seats 5,000, but they admitted it was difficult to approximate because of the rate at which people were still arriving.

Before the former commander-in-chief took the stage, candidates running for statewide office within Arizona participated in a forum to express their views to potential voters. Most candidates stayed to hear the speech from the most notable figure within the Republican Party.

Congressman Andy Biggs (R-AZ) told the audience before the former president spoke that the fire marshal told him the facility, which can handle a crowd of 5,000, was at maximum capacity, which RightSide Broadcasting said was 4,000 for this event. Biggs noted that there were thousands of Trump supporters outside the venue as well.

The Trump speech comes as the ongoing forensic audit of approximately 2.1 million ballots cast in Maricopa County – a population center that holds roughly 60 percent of the state’s residents – is expected to publish its results soon. Previously, Trump has praised the efforts of the Arizona Republicans in the State Senate.

Furthermore, the efforts in Arizona have drawn the attention of lawmakers from across the country. Several representatives from the closely contested states of Georgia and Pennsylvania – both which have faced heavy scrutiny due to irregularities during the 2020 election process – have toured the audit to better understand the process.  Many leaders have called for a similar effort to take place in their state.

At an earlier rally held in Ohio held last month, the former president told The Star News Network, “There’s no more important issue than the 2020 election.”

Laura Baigert is a senior reporter at The Star News Network, where she covers stories for The Tennessee Star and The Georgia Star News. Cooper Moran contributed to this story.
Image “Former President Trump Rallies in Phoenix” by Right Side Broadcast Network.