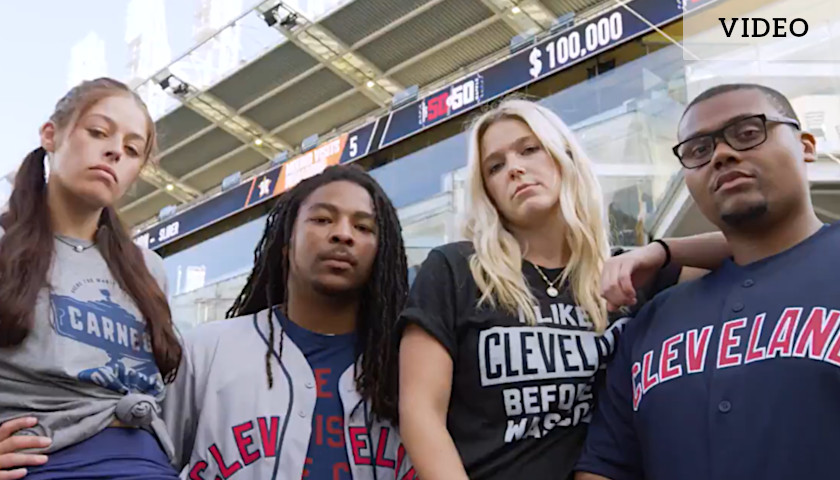 After years of haranguing by left-wing protestors, the Cleveland Indians have finally caved, and will change their team’s nickname.

The name change was announced in a two minute video narrated by Tom Hanks. The team will be called the Cleveland Guardians.

“We remember those moments as we move forward with change. You see, there’s always been Cleveland. That’s the best part of our name. And now it’s time to unite as one family, as one community, to build the next era for this team and this city,” Hanks says. “To keep watch and guard what makes this game the greatest. To come together and welcome all who want to join us. We are loyal and proud and resilient. We protect what we’ve learned, and always defend it. Together we stand with all who understand what it means to be born and built from ‘The Land,'” because this is a city we love, and the game we believe in. And together, we are all Cleveland Guardians.”

Together, we are all… pic.twitter.com/R5FnT4kv1I

It is unclear when the name-change will go into effect, but for decades, the team has been derided as “racist” for using the Indians nickname.

Protests against the team’s nickname, and its mascot “Chief Wahoo,” spanned at least from the 1970’s until the present day.

But the current political climate, along with other professional sports teams dropping references to Native Americans in their team names, appears to have pushed the team over the edge.

Before the 2020-2021 football season, Washington’s professional football team dropped its “Redskins” moniker, and adopted “Football Team” as its nickname instead.

“There is no meaningful line to be drawn between the blatantly racist former name of the Washington football team and monikers such as Indians, Braves, and Chiefs that purport to honor Native Americans,” that publication said. “They are out of excuses. All Native American mascots must be eliminated.”

The response from Native Americans to the team’s name have ranged from angry to apathetic.

The Penobscot Indian Nation formally asked the team to drop the nickname in 2000.

“My great-grandmother was a full-blooded Cherokee Indian. I have no problem, whatsoever, with the use of Native American logos. None at all,” Randy Rollyson said at the time.

“As a member of the Ottawa Tribe of Oklahoma, I generally don’t have any qualms with teams using Native American imagery. The only one I see as kind of offensive is the Redskins, just because of the racial epitaph that is associated with it,” said Garrett Alley.

Pete D’Abrosca is a contributor at The Ohio Star and The Star News Network. Follow Pete on Twitter. Email tips to [email protected]