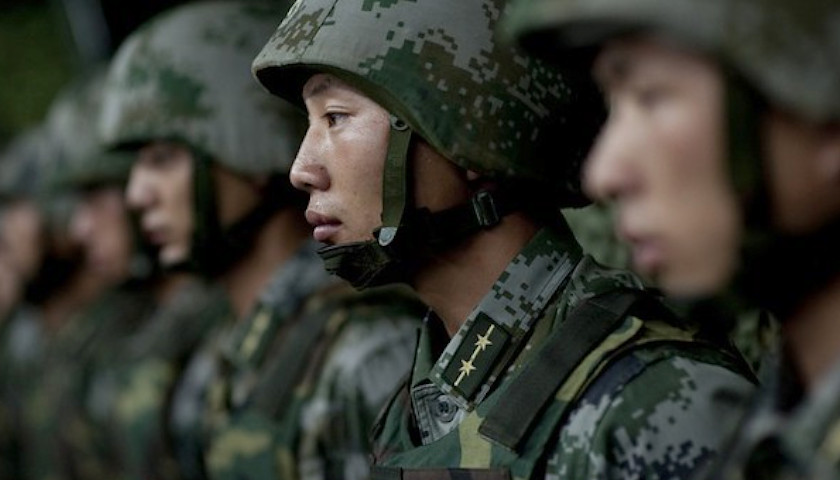 During his presidency, Barack Obama, in his infinite wisdom, liked to tell us that wars are passé and publicly chided Russia’s Vladimir Putin for acting like a relic of the 20th century. Privately, Obama seems to have been aware of the extremely dangerous situations he helped create in Iran, Syria, Russia, and China, and told Trump during their 2016 transition talks that war was likely with North Korea.

China, meanwhile, had engaged in a series of borderline acts of war with America, repeatedly interfering with the Navy’s freedom of navigation patrols and shining lasers from their new bases in Africa to blind American pilots. This culminated with the 2013 USS Cowpens incident, where a Chinese carrier force blocked an American cruiser’s path in international waters, forcing the Cowpens to execute a “crashback” emergency stop.

Obama told the Navy to discontinue patrols in the “disputed” areas. He also invited China to participate in the Pacific Rim joint naval exercises designed to prepare for a possible war with . . . China.

Trump reversed Obama’s policy of “strategic patience.” He matched Chinese tariffs on American exports and uninvited them from the RIMPAC exercises. Analysts predicted war was imminent and that it would be Trump’s fault. But they were wrong. The tone of the Chinese newscasters softened from belligerence to whining about America’s unfairness. The Chinese stopped shining lasers at American planes.

But now we have a president who gets paid, via his son, to be friendly to China. So what effect has this had on international relations?

China has stopped whining about America’s tough economic policies and started mocking us at summit conferences. Biden says he is “proud” of his team that let Chinese diplomats lecture them. “We hope the United States will do better on human rights,” the Chinese told our diplomats. Biden knows on which side his bread is buttered.

Rear Admiral Mike Studeman, top intelligence officer for the East Asian Command, testified to Congress that China is preparing to move against Taiwan and others in the region before the end of the decade. He warned that the danger is “absolutely awesome and it has every dimension we saw in the 20th century.”

According to the Washington Times, Studeman said China’s use of military force was a matter of time, not a question of “if.”

Meanwhile, Mark Milley, our repulsive chairman of the Joint Chiefs of Staff, warned in the most muted tones possible that he “would be concerned” about the American military’s “ability to sustain a long-term conflict” with China.

Ordinarily an admission by the chairman of the Joint Chiefs that we are not prepared to fight a war with our greatest strategic enemy would make alarm bells go off. But now that Biden is in charge and everything is ispo facto perfect with the world, the same people who said Trump was leading us to the brink of destruction are silent.

Lest we focus exclusively on the regional threat to Taiwan, Gordon Chang warns us to be cognizant of targets the United States may be less inclined to defend against the Chinese. Writing for the Gatestone Institute last week, Chang says that China is preparing for a full-scale invasion of Indian territory. China recently has increased the troop presence on the Indian border at Ladakh from 15,000 to 50,000, and they are bringing in advanced weapons and building new bases. The Chinese also are encroaching on Indian territory at Sikkim and muscling into Bhutan and Nepal.

Chang further warns that China is building 700 square miles of new nuclear missile silos with warhead capacity of “about as much firepower as the existing U.S. nuclear arsenal.” (That is in addition to the nukes they already have.)

This is interesting because, also last week, the CCP uploaded a video on a Chinese military channel telling Japan that if they deploy “one soldier, one plane, or one ship” in defense of Taiwan when China does attack, China will use nuclear bombs against Japan “first” and “continuously.”

China’s weakness at the moment is demographic. Years of China’s one-child policy mean that every soldier serving in the Chinese army is also the last of his family line. And, despite decades of Communism, Chinese still care deeply about family. Every soldier killed means a family extinguished.

This is why we should take China’s threats of nuclear attack seriously, as well as the threat of other forms of asymmetric warfare: hypersonic missiles, swarms of exploding drones, etc. India tacitly admitted some of its soldiers on the border with China had recently been microwaved, and the New York Times reported in 2018 that doctors studying three dozen U.S. diplomats in Cuba and China who suffered from a series of bizarre medical issues concluded the diplomats there had also been microwaved. (The diplomatic incidents, of course, occurred during the Obama Administration.)

Finally, there are biological weapons. If you consider the coronavirus as a test-run attack, or at the very least a chance to gather vital data on opponents, what do you think the Chinese have concluded about America’s ability to deal with a national health crisis? A flu with a better than 99 percent survival rate destroyed our economy and locked people in their homes for a year. What might a real weaponized pathogen achieve?

It makes for somewhat spooky reading to review, in modern times, the news pieces and expert analysis on Hitler’s Germany written in the mid-1930s. Before the war made his name and philosophy synonymous with evil, Hitler was, to many, a shrewd politician with an understandable desire to have his nation assume its rightful “place in the sun.” America herself was divided between those who felt Europe ought to be left to stew in its own juice, and those who felt a certain sympathy with and even admiration for the German peoples’ rise to power. Few saw the threat for what it was until it was too late.

Churchill wrote at the opening of his extraordinary work  The Second World War that his purpose was to show how appeasement, inaction, and “desires for safety and a quiet life may be found to lead direct to the bull’s-eye of disaster”:

The crimes of the vanquished find their background and their explanation, though not of course their pardon, in the follies of the victors. Without these follies crime would have found neither temptation nor opportunity.

It was Churchill’s hope that this warning would help subsequent generations to avoid a third conflagration, from which none might survive to tell the tale.

As the Washington Times concluded in their report on Admiral Studeman’s remarks:

‘Too late,’ Adm. Studeman said. ‘Too late in comprehending the deadly purpose of a potential enemy. Too late in realizing the mortal danger. Too late in preparedness. Too late in uniting all possible forces for resistance.’

Dan Gelernter is a columnist for American Greatness living in Connecticut.
Photo “Chinese Military” by Times Asi. CC BY 2.0.