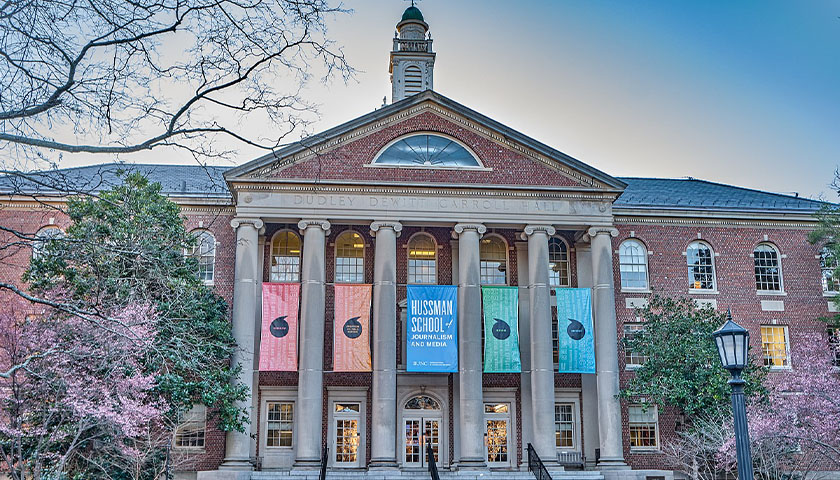 Journalism professors at UNC Chapel Hill are protesting a “core values” statement that upholds objectivity as a key tenet of news reporting.

Faculty members of UNC’s Hussman School of Journalism and Media converged last week to bemoan a statement of values that’s etched in granite and is found in the lobby of their school.

The core values statement, installed two years ago, touts objectivity, impartiality, integrity and truth-seeking, and after their kvetching session that statement was reportedly scrapped from the school’s website, the News & Observer reports.

In 2019, Walter Hussman, a UNC alumnus and owner of a media conglomerate of newspapers and other media outlets, donated $25 million to the UNC journalism school. Part of the donation contract installed those values into the school’s wall and mission, according to UNC’s website.

But Hussman had expressed concerns over the hiring of Nikole Hannah-Jones, the architect of the biased New York Times 1619 Project, and she cited the journalism magnate as one reason she rejected the UNC job.

“Faculty say the display gives the impression those statements are values of the school and its faculty, and in a draft of a statement … faculty wrote it should be removed or given more context. The draft also said Hussman’s actions had been harmful to the school’s reputation,” the News & Observer reported.

What’s more, the journalism school dean, Susan King, “told attendees she would explore options with lawyers about what the school can do with the display in the lobby.”

To provide the most complete report, a news organization must not just cover the news, but uncover it. It must follow the story wherever it leads, regardless of any preconceived ideas on what might be most newsworthy.

The pursuit of truth is a noble goal of journalism. But the truth is not always apparent or known immediately. Journalists’ role is therefore not to determine what they believe at that time to be the truth and reveal only that to their readers, but rather to report as completely and impartially as possible all verifiable facts so that readers can, based on their own knowledge and experience, determine what they believe to be the truth.

When a newspaper delivers both news and opinions, the impartiality and credibility of the news organization can be questioned. To minimize this as much as possible there needs to be a sharp and clear distinction between news and opinion, both to those providing and consuming the news.

At least one top official at UNC has balked at the journalism professors’ demands.

“I feel like Walter Hussman has been unfairly maligned,” Charlie Tuggle, senior associate dean for undergraduate studies, told ABC 11. “…He’s truly worried about the state of journalism in today’s world, as am I. I share those concerns with him.”

When Tuggle asked what about the core values statement is so problematic, he said “the response he received came down to one word — objectivity — and that no journalist can be truly objective.”

“Are we saying that because we can’t be perfect at it, we don’t even try?” Tuggle said to ABC 11. “We just give it up? That’s what I teach my students is, you cannot be unbiased. Your lived experience is your lived experience. And that’s going to color everything you do and say. And what you believe. But, try. Please try.”

Jennifer Kabbany is editor of The College Fix. She previously worked as a daily newspaper reporter and columnist for a decade in Southern California, and prior to that held editorial positions at The Weekly Standard, Washington Times and FrontPageMagazine. She is also a Robert Novak Journalism Fellowship recipient and has contributed to National Review.
Photo “Carroll Hall UNC Hussman School of Journalism and Media” by Mihaly I. Lukacs CC BY-SA 4.0.