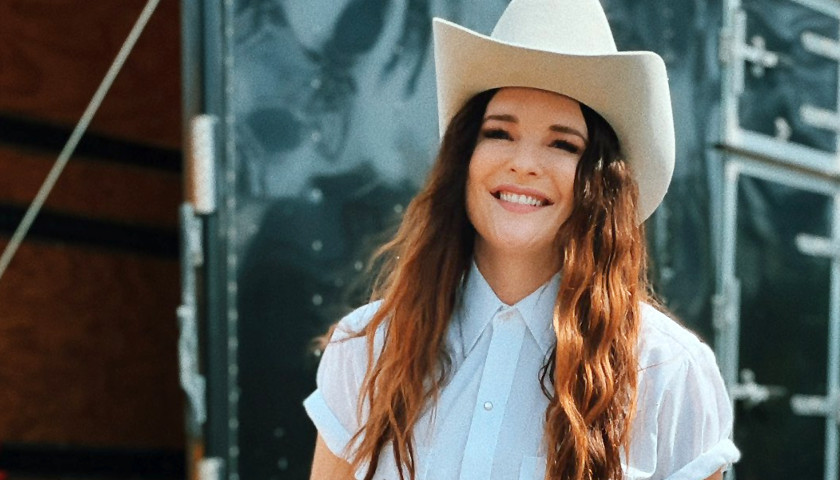 NASHVILLE, Tennessee – For Texas rancher, songwriter, and songstress Jenna Paulette, Cowboy Country is more than a fashion trend or a title of a playlist; it’s a way of life. Having grown up working her grandfather’s ranch, she appreciates the long game in building for the future and understands what goes into anything worth being proud of.

In my usual style, I wanted to find how a bona fide cowgirl from Texas made her way to Nashville, Tennessee.

Paulette grew up often working on her grandad’s ranch and states she has always loved cattle.

“It’s just something that’s in your blood and you have to love to want to be around cows all day. I love the way cows smell, the way they move even, everything about them. It’s life to me.”

When they were working on the ranch, her grandad always had George Strait tapes/CDs in his truck.

“I love George Strait because he represented all the men that I grew up admiring. I love the (Dixie) Chicks because they sang about wide-open spaces, and Cowboy Take Me Away. All their songs really resonated in the way that I grew up.”

Her mom recognized that she was a good singer when she was a little girl and put her in choir.

She knew I wanted to pursue country music when one day she was waiting for her grandad to bring the cows around. She was sitting out in the middle of the main road and was told not to let any cows get by.

Paulette recalls, “It was summer and it was so hot and I was singing ‘Wide Open Spaces’ at the top of my lungs with nobody there. I remember thinking, ‘I want to be able to make people feel the way this song makes me feel about this place that I love.’”

That is when she decided to pursue country music.

Before moving to Nashville Paulette got a degree in Visual Communication (which is a type of marketing degree) from the renowned Savannah College of Art and Design. The person who ran their music program saw her perform for the National High School Musical Theatre Awards and offered her a scholarship on the spot. She never even applied to go to college there.

“Honestly, it’s the best thing that could have happened to me. I didn’t know I even had an artistic bone in my body.” She didn’t want to pursue music because she felt she could do that with or without a degree so she followed Kenny Chesney’s lead and got a marketing degree.

However, she didn’t start writing songs until she was in college. She figured out that you could have a career as a songwriter even if you didn’t tour/perform. She looked up the names to see who wrote her favorite songs and found that Hilary Lindsay, Ashley Gorley along with several others wrote many of the country tunes that are/were currently popular.

She had a mutual friend whose husband pastored a church in Nashville where Ashley Gorley attended and she arranged a meeting. He became Paulette’s mentor and was a huge influence in spurring along in her writing career.

“He was ruthless in the best way. He was the voice for me. I listened to him and it helped me figure out who I am as an artist. It was such a blessing to get learn with him as a mentor,” she recounts. He showed her how to become better.

Even still, she was hesitant to move permanently to Nashville away from her home and family. Gorley told her, “You have to be present to win. You can’t do this [music career] and be there. You can go back home after you make it, but you have to make it first.”

Since moving to Nashville. Paulette became a staple of the Song Suffragettes; a weekly female singer-songwriter showcase at Nashville’s Listening Room Café. The cowgirl has also toured with Mason Ramsey and opened for classic country acts Clay Walker and Joe Nichols, as her prior independent releases appeared on Apple Music’s “Breaking Country” playlist, Google Play’s “Country’s New Crop” playlist, and Radio Disney. Additionally, Paulette has appeared on Apple Music’s “The Kelleigh Bannen Show” and Circle TV’s “The Southern Weekend.” CMT named Paulette a Discovery Artist, while Cosmo has touted her as an “artist to pay attention to,” Cliché Magazine describes her music as “the quintessential combination of modern glam and southwestern grit,” further noting that “Paulette brings a sound all her own” and Billboard has celebrated her embrace of “traditional and contemporary country influences” and “descriptive storytelling.”

In 2019, Paulette released an EP called Modern Cowboy Vol. 1. With songs like, “Wild Like the West,” “Blue Jeans,” “Midnight Cowboy,” and “F-150” she explains, “You can choose the lifestyle and mentality of the West. It’s something that gets in your blood and needs to be satisfied and I want to represent a picture of what that can look like in our day and age. I have a foundation, and I get to build on it for the rest of my life and it’s based on who I actually am. That’s a really good place to have people get to know you as an artist.”

Not only that, in many of the music videos she puts out, she uses real cow hands from ranches all over Texas.. Given her degree in Visual Communications, she writes the storyboards for every song. They are a cut above the usual videos put out by other burgeoning artists.

“You can just see it when somebody’s not for real about the Western way of life. It’s just the best way to live and I want to showcase that in these videos.”

“Jenna’s skill set as an artist and a songwriter, paired with her work ethic is undeniable,” offers Sea Gayle’s Creative Director, Emily Witters. “We couldn’t be more excited to have her join the Sea Gayle family and to support her in this next chapter of her already flourishing career.”

“It is the most natural fit for me in Nashville and I am so thankful to get to write with them and have their administrative team be my team,” she confirms.

Paulette is currently working on new music and wants to put out a real record with a compilation of songs that tell a story. On June 25th, she released the first song from that project called. “Country in the Girl.”

There’s a lot of truth in her tongue-in-cheek lyrics:

There is no doubt she met quite of few girls who fit this description to a tee.

As she releases new music throughout the summer, it is her goal that to put together all the songs that will become Modern Cowboy Volume 2.

She will be touring with John Michael Montgomery and other artists to be named later.

In this high-stakes town full of talented singer/songwriters what sets Paulette apart is the fact that she grew up exposed to the ranch lifestyle doing dirty work alongside the men. In most of her upbringing, she was expected to rise to the occasion without excuses.

“I’ve never thought that being a girl was a deficit. I’ve always thought I belonged.”

In addition to singing, her authenticity led to Boot Barn tapping Paulette as a spokesperson for their Wonderwest line.

Jenna Paulette is empowered as a female artist in the male-dominated country music field where she has learned that if she works hard to make great music, the rest will follow.