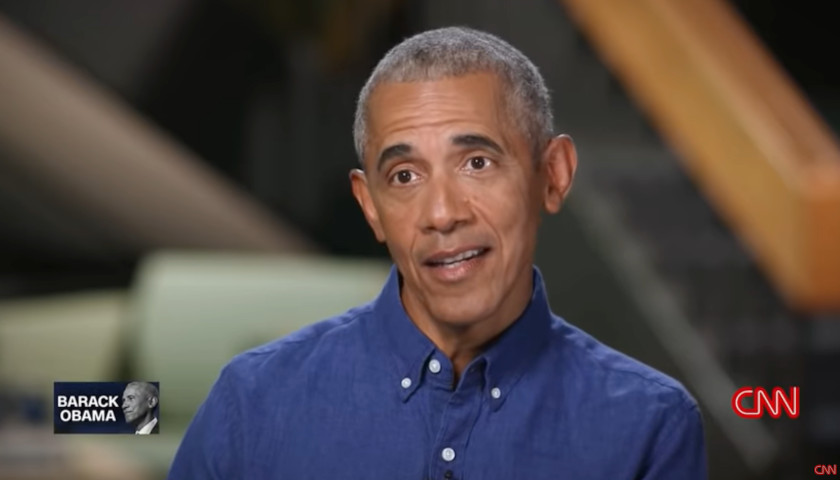 Obama, during a CNN interview with Anderson Cooper, pondered the ramifications of the 2020 election and the election integrity concerns.

“The degree to which we did not see that the Republican establishment said ‘Hold on. Time out. That’s not acceptable. That’s not who we are,’ but rather be cowed into accepting it and then finally culminating in January 6, where what was originally ‘Oh, don’t worry, this isn’t going anywhere. We’re just letting Trump and others vent,’” Obama said.

“Then suddenly you have large portions of an elected Congress going along with the falsehood that there were problems with the election.”

Obama said Raffensperger, a Republican, resisted pressure from members of his own party.

“And then, poof, suddenly everybody was back in line. The reason for that was because the base believed it. They believed it because it had been told to them not just by the president but by the media that they watch. And no one stood up and said stop. ‘This is enough. This is not true,’” Obama said.

“I won’t say nobody. Let me correct it. There were some very brave people who did their jobs, like the Secretary of State in Georgia who was then viciously attacked for it. Then all those congressmen started looking around and saying ‘I’ll lose my job. I’ll get voted out of office.’”

Members of the Georgia Republican Party gathered at their state convention last weekend and passed a motion to formally censure Raffensperger.

Raffensperger has already declared he will run for reelection and said he expects to perform well.

Raffensperger has declined to answer whether he believes Trump voters will forgive him for one of his staff members anonymously sourcing a Washington Post story designed to put Trump in a negative light — a story that people now discredit. The Georgia Star News also asked if he thinks Trump voters can overlook him accepting $5.6 million from the Mark Zuckerberg-funded Center for Election Innovation and Research to assist with last year’s election. This, even though Zuckerberg had a clear personal and political bias against Trump.

The Star News also asked why officials at the state and county level in Georgia have failed to produce chain of custody records for more than 333,000 absentee vote-by-mail ballots deposited in drop boxes located around the state for that election. But Raffensperger’s staff members have also declined to answer those questions.

U.S. Rep. Jody Hice (R-GA-10) announced in March that he wants to replace Raffensperger and will run for Raffensperger’s seat next year.