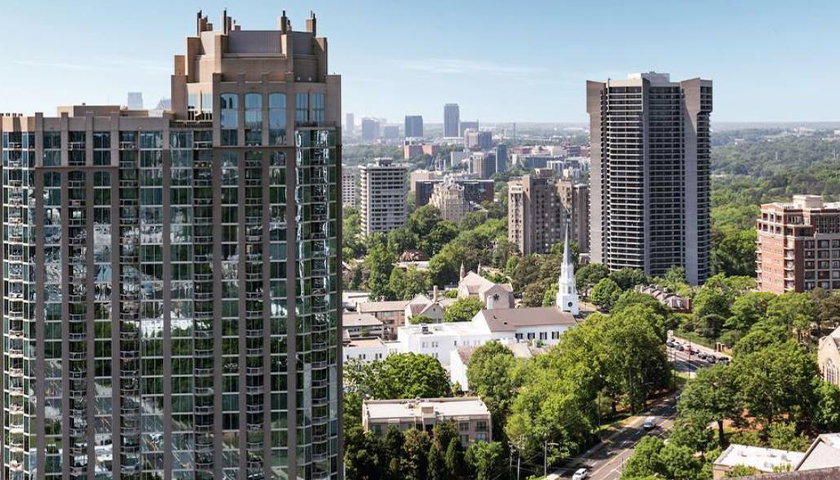 Buckhead, where residents are already trying to formally break away from the City of Atlanta so they can address an out-of-control crime wave using their own resources, had another violent weekend, including a murder.

According to the Atlanta Police Department’s (APD’s) website, someone shot a man Saturday as he jogged through the 1200 block of West Wesley Road in Buckhead.

APD officers also reported a fatal shooting Sunday at the Intercontinental Hotel at the 3300 block of Peachtree Road. Hotel staff told The Georgia Star News Sunday that the hotel is in Buckhead.

“Upon arrival, officers located a male with an apparent gunshot wound.  He was transported to the hospital in critical condition,” the APD reported.

“Officers detained a male on scene and investigators were notified and will be working to determine the circumstances surrounding the shooting.”

Medical personnel later pronounced the man dead, according to the APD’s website.

Admins with the Buckhead CITY Group on Facebook reported certain unidentified individuals have called Buckhead residents and asked their opinions about making Buckhead its own city.

“Many of their questions are leading and compound intending to elicit specific responses. We do not know who has paid for this survey, but from the questions they presumably intend on using the data to argue the residents are not for Buckhead cityhood,” according to group admins.

Buckhead residents organized earlier this year and announced they wish to secede from Atlanta.

Members of a second group, A Committee for a United Atlanta, formed within the district last month. They said seceding is dangerous.

“How much debt will Buckhead residents assume? What are the public pension and bond obligations for Buckhead? How much will water bills increase? What will happen to our public schools? How much division and social unrest will result from separating our city and dividing our communities?” Lindsey asked last month.

“Even attempting to divide Atlanta will damage our business reputation and cause long-term economic damage and a diminished tax base.”

Members of the Buckhead Exploratory Committee (BEOC), however, said they want to leave.

BEOC spokesman Sam Lenaeus told The Star News in April that “even after paying a lot in taxes, we were still expected to solve our own problems and pour more private money into them.”

Businesses and families, they went on to say, are leaving.

“We learned that there are a lot of people wondering why we have not done this sooner. The stories we hear from some of our neighbors are terrifying: emergency services that don’t show up, elderly couples that are too afraid to go to the store, moms that are afraid to go to a gas station with their children in the car for fear of car-jacking, permits that take longer than six months to rebuild houses damaged by weather, and the list goes on. We heard from one couple that went to a park and came back to find out that both vehicles parked in separate areas of the park were stolen at the same time. The latest are carjackings on children’s carpool lines,” Lenaeus said at the time.

“We also heard from many parents who were very unhappy with the leadership at the Atlanta Public Schools. We are hearing about serious mental health issues and a complete lack of support for children with special needs during the pandemic, all caused by APS leadership. We know the city can do better for our children and the hundreds of working parents out there.”