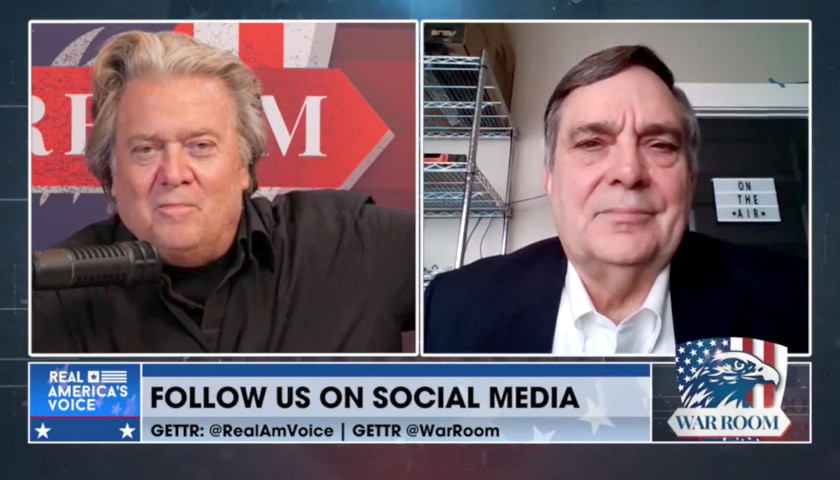 Bannon: You can look at this kind of you’re a partisan, but the way the newspaper is run, you report facts.

And the big media, but I mean, BBC and The Financial Times, because what happened in Arizona was going to be emblematic of what happens in this country going forward on elections. What are your observations about how this was handled and where we stand now?

Leahy: Yes, the Maricopa County Board of Supervisors and the recorder there and all the election officials have been extraordinary, I think, and unnecessarily defensive. It’s been an adversarial situation there.

And by the way, I don’t know if you’ve had anybody mention this to you, Steve, you know, the recorder there, Stephen Richer, who is a Republican, barely beat Adrian Fontes, who is now the secretary of state-elect there, if it turns out.

Bannon: Whoah, whoah. I got it.

Leahy: I got you, there are still challenges to be made. But here’s what I’m going to say about Richer. I don’t know if you know this. Do you know he organized a political action committee back in 2021, the Pro-Democracy Republican PAC?

Leahy: And from what we can tell, he got funding from major Democratic donors there. Francis Najafi gave him $20,000. Najafi also gave 60,000 to the Democrats, Arizona Democrats, and $5,300 to Katie Hobbs.

It seems to me that in that group, apparently, we’re getting some of the details on it, but some of the funding I think, will show in July went to advertisements in the primary that were opposed to Kari Lake.

We’re developing that story. And so the question is, how can this guy be fair and objective, at least in terms of his conduct? He’s been very, very defensive. And so that’s one of the storylines that we’re developing at The Arizona Sun Times.

Bannon: Correct me if I’m wrong. Four counties have now said they’re going to hold up certification, or maybe they’re either holding it up or can’t certify. There is a little confusion about this, at least until they see how Maricopa County responds to the letter. This is a blistering letter from the attorney general.

The Daily Caller has got another memo from somebody. There are about five memos going around that talk about in tremendous depth how this thing was mishandled and basically can’t be certified. Are these other counties hanging back to see how Maricopa County responds to the attorney general about certification?

Leahy: In their own counties as well? I know Cochise and Mohave have said they’re going to delay certification, so they have some concerns as well. As you know, from 2020, the whole process of certification of an election is very elaborate, and that’s kind of where they’re in right now.

The bombshell was the assistant attorney general for Arizona sent this letter to Maricopa County election official Tom Liddy and said, look, we have five or six questions about what happened on Election Day, particularly with regards to these 70 precincts, at least 70 precincts where the tabulation machines weren’t working.

They were very detailed, with four or five key questions, logical, and common sense. And what they said is, you shouldn’t be certifying that election until you answer these questions. So we have a big battle brewing on the certification issue there in Maricopa County and in the other counties as well.

Bannon: But the other counties, aren’t they arguing? I think this boils down to the disenfranchisement of their voters. I mean, in Cochise and Mohave, they’re saying, hey, you are two-thirds of the vote or 65 percent of the vote in Maricopa County.

Essentially your incompetence, corruption, malfeasance, whatever you want to say is. And I think that PAC thing is a big deal. But hey, was this done on purpose? But they’re saying out in these smaller rural counties, hey, you’re basically taking the vote away from our people because you’ve got such a huge center of gravity of this election. Is that it in a nutshell?

Leahy: Yes, that’s part of it. But I think they also have their own concerns about vote by mail in their counties as well, Steve. It’s a huge mess, and you’ve talked about this. This is an embarrassment for the people of the state of Arizona that their election administration has been incompetent is perhaps the kindest way to describe it.

We looked at the Arizona statutes on this, and there are grounds for suing election officials in the case of misconduct. And the question is, does misconduct have to be just pure incompetence or does it also involve some level of intent?

I think there are going to be a huge number of lawsuits in the next couple of weeks there, and I think that there is still a chance that Kari Lake could become governor. In my view, it’s an outside chance. You have a little different view on that.