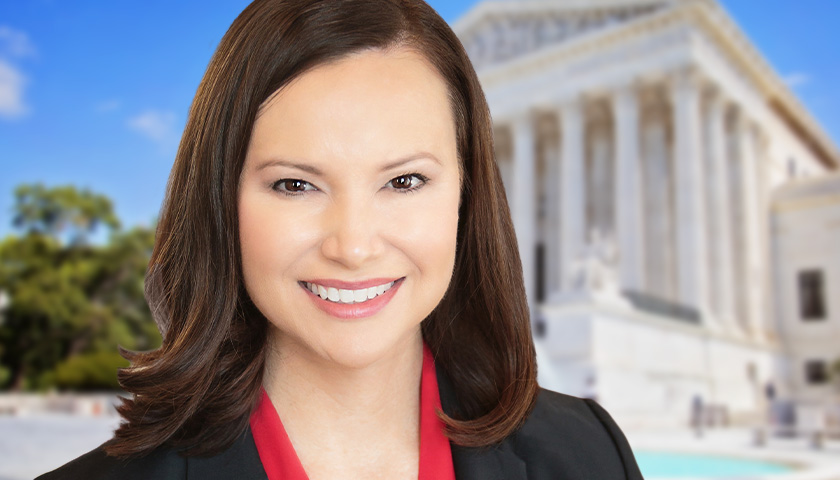 Florida Attorney General Ashley Moody filed a brief with the U.S. Supreme Court in support of a lawsuit filed by Texas and Louisiana seeking to halt a Department of Homeland Security policy that limited federal agents from detaining and deporting dangerous criminal aliens and instead is allowing them to remain in the U.S.

“Biden’s refusal to enact federal immigration laws passed by Congress is jeopardizing public safety,” Moody said. Earlier this year, Moody and 18 other attorneys general also filed a brief with the court in support of Texas’ and Louisiana’s case.

According to the brief, Florida spends more than $130 million a year incarcerating roughly 7,000 criminal foreign nationals. The cost to taxpayers for law enforcement expenses, emergency medical services, victims’ services is millions of dollars more, she says.

Not only are criminal aliens killing Floridians but they are also trafficking people and drugs into Florida from Mexico, law enforcement officers throughout Florida have found. In the last few months, they’ve also seized enough fentanyl to kill everyone in Florida.

Foreign nationals who’ve illegally entered the U.S. who’ve been convicted of certain crimes are required by federal law to be detained and processed for removal after they are released from custody by law enforcement. This policy hasn’t been followed, Texas and Louisiana allege, because of guidance Homeland Security Secretary Alejandro Mayorkas issued last year drastically altering removal procedures.

Moody’s office has taken action against the Biden administration over immigration and border security since last March. She’s also led a coalition of AGs calling on Mayorkas to resign claiming dereliction of duty.

In March 2021, Florida first sued over Biden administration directives suspending arrests and deportations of certain criminal aliens. On Jan. 20, President Joe Biden issued Executive Order 13993, Revisions of Civil Immigration Enforcement Policies and Priorities. Then, Mayorkas issued a temporary and then final guidance halting nearly all civil immigration enforcements and paused the removal of any noncitizen with a final order of removal for 100 days with subsequent directives.

As a result, Moody argued, “convicted criminals in the country illegally – including drug traffickers, sex offenders and those convicted of domestic violence – will no longer be deported but instead remain in Florida free to commit further offenses.”

In September 2021, Florida joined 17 other states in filing an amicus brief in support of a lawsuit filed by Texas and Louisiana asking the court to prohibit the Biden administration from limiting nearly all deportations and immigration-related arrests, including for those convicted of serious and violent crimes. The Supreme Court is expected to hear oral arguments in this case later this month.

In January 2022, Florida joined a multi-state lawsuit against the Biden administration for its so-called Central America Minors program, which the AGs argue has worsened the border crisis. The policy allows previously banned minors from three Central American countries entry into the U.S. and allows them to bring family members and caregivers, bypassing the legal immigration process.

The CAM program is unlawful, violates Florida’s sovereignty, and places an undue burden on taxpayers, the AGs maintain.

In February 2022, Moody filed an amended complaint over the administration’s “Parole and Alternatives to Detention” plan after video surfaced of single adult men who’d illegally entered Texas and were unlawfully released were boarding buses in Brownsville to be transported north to other cities and states.

At the time, Florida Gov. Ron DeSantis criticized the Biden administration for “not only consciously refus[ing] to enforce immigrations laws, but [for] also develop[ing] an operation to secretly resettle illegal aliens into communities across Florida and the rest of the United States. They’re doing this in the dark of night without any coordination with states, without any background checks, and without any efforts to initiate the legal process for their removal.”

Since then, the state legislature authorized Florida to transport illegal foreign nationals out of Florida and allocated $12 million to do so.

In May 2022, U.S. District Judge T. Kent Wetherell rejected a Biden administration attempt to dismiss Florida’s first lawsuit, arguing Florida doesn’t have jurisdiction or the authority to determine how and what immigration statutes are enforced.

Wetherell disagreed, arguing that position “is as remarkable as it is wrong because it is well established that no one, not even the President, is above the law and the Court unquestionably has the authority to say what the law is and to invalidate action of the executive branch that contravenes the law and/or the Constitution. Thus, if Florida’s allegations that Defendants are essentially flaunting the immigration laws are proven to be true, the Court most certainly can (and will) do something about it.”

In April 2022, Moody sued the Biden administration with Alabama and Georgia for its “refusal to deport criminals here illegally” and for arguing it has the discretion to decide “which aliens should be arrested, detained and removed.” The AGs maintain the administration’s policies “directly conflict with the clear commands of Congress” and it has “used the claimed discretion to allow illegal immigrants guilty of drug trafficking, burglary and other serious crimes to return to our communities upon release from state custody rather than arresting and removing them as federal law requires.”

Also in April, Moody filed an amended complaint to a multi-state lawsuit filed by Arizona, Louisiana and Missouri opposing the administration’s plan to end the public health authority, Title 42. The court ruled in the AG’s favor, keeping Title 42 in place.

And in April, Florida and 13 other states sued the Biden administration over its new Asylum Rule, which largely removes federal immigration judges from the asylum review process. The AGs argue the policy violates federal laws, bypasses Congress, and drastically erodes asylum integrity safeguards.

In August and September, Moody’s office released some of the findings of its deposition of U.S. Border Patrol Chief Raul Ortiz, who said under oath that Biden administration policies were creating a border crisis. Her office also announced it had uncovered more information about the administration’s plan to release even more people into the U.S. after Title 42 ends and showed how deportations were historically low under the administration despite claims to the contrary.