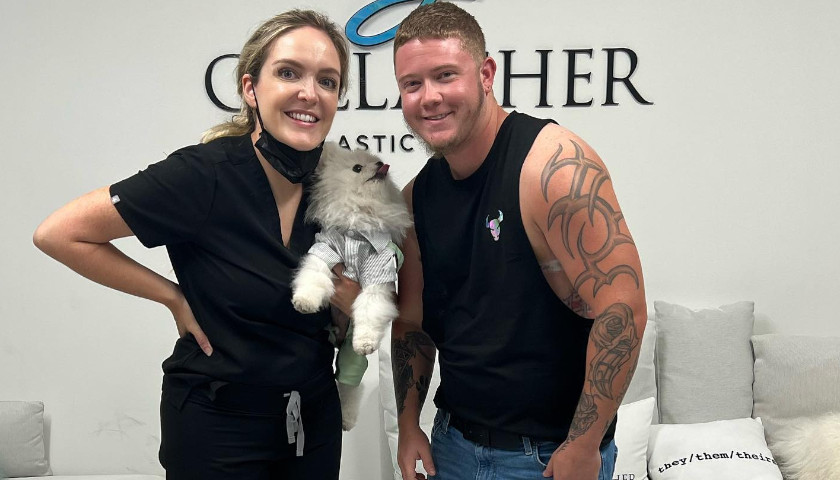 “More trans teens are choosing ‘top surgery,’” reads a Monday New York Times headline of a story that highlights the practice of a Miami “top” surgeon who posts photos on TikTok touting her work with the phrase, “Yeet the Teet,” a reference to breast removal.

The Times uses the example of a girl, 17, who is referred to as “Michael,” posing for photos of her newly revealed chest, with breasts, and now bandages, removed, alongside her mother and her “top surgeon,” Dr. Sidhbh Gallagher, who posts the photos on her social media platforms for all her “followers” to see the results.

“Michael is part of a very small but growing group of transgender adolescents who have had top surgery, or breast removal, to better align their bodies with their experience of gender,” is how The Times describes a 17-year-old girl’s decision to have her healthy breasts cut off.

While the report does acknowledge there is little evidence of the long-term benefits of transgender surgery for minors, and considers the issue of detransitioners, it nevertheless says this about the call to protect minors from aggressive LGBTQ activists and potentially greedy surgeons:

Few groups of young people have received as much attention. Republican elected officials across the United States are seeking to ban all so-called gender-affirming care for minors, turning an intensely personal medical decision into a political maelstrom with significant consequences for transgender adolescents and their families.

“Small studies have shown that many transgender adolescents report significant discomfort related to their breasts, including difficulty showering, sleeping and dating,” The Times states. “As the population of these adolescents has grown, top surgery has been offered at younger ages.”

Gallagher, who, The Times notes, has built a highly successful practice performing elective double mastectomies on women and girls, uses social media platforms, especially TikTok, to reach out to her “followers,” some of whom may ultimately become her patients.

Gallaher’s policy regarding performance of elective breast removal for minors indicates she welcomes teens to her practice:

We are happy to offer top surgery to minors with consent of parents and the recommendation of the patient’s mental health professional.

When we evaluate each patient, we keep in mind the risk benefit analysis and understand that it may well be much more detrimental to the patient to wait until the age of 18 for surgery. Each case is evaluated with patient and family.

However, while the policy, like those of others in the transgender medical industry, mentions parental consent and a recommendation by a mental health professional prior to a minor’s treatment or surgery, in a recent study published in the Journal of Sex & Marital Therapy, Dr. Stephen B. Levine of the Department of Psychiatry at Case Western Reserve University expressed concern about the information presented during “informed consent” sessions and the accuracy of such mental health evaluations for “gender-affirmative care.”

“The many risks of these interventions, including medicalizing a temporary adolescent identity, have come into a clearer focus through an awareness of detransitioners,” Levine and his colleagues asserted, adding that while the lack of high-quality evidence for the success of these interventions should demand a comprehensive informed consent about their “risks and long-term outcomes,” the process is restricted by “erroneous professional assumptions; poor quality of the initial evaluations; and inaccurate and incomplete information shared with patients and their parents.”

While Levine’s goal has been to improve the informed consent process for parents, their children, and clinicians, he and his fellow researchers cited clear obstacles, one of which is the high level of transgender ideology activism that has been allowed to influence medical issues, including the initial mental health evaluations:

The poor quality of mental health evaluations has been a point of significant discontent for a growing number of parents of gender-dysphoric youth. Increasingly, parents have formed dozens of support groups in North America, Europe, Australia and New Zealand, united in their objections to the idea that the best or the only treatment for their gender-dysphoric children is affirmation (Genspect, 2021). These distressed parents, recognizing that their son or daughter may eventually decide to present to others as a trans person, want a psychotherapeutic investigation to understand what contributed to the development of this identity and an exploration of noninvasive treatment options. Frequently, they cannot find anyone in their community who does not recommend immediate affirmation.

Gallagher reportedly has boasted she doesn’t “know of a single case of regret” following her surgeries, adding that she follows up with her patients for “up to a year,” according to The Times, a period that may likely seem quite brief to an individual coming to terms with real regrets.

Referring to her critics as “transphobes” who “tried to come for me,” Gallagher responded on TikTok with a celebratory dance and a mocking grin as she boasted, “They only increased my following.”