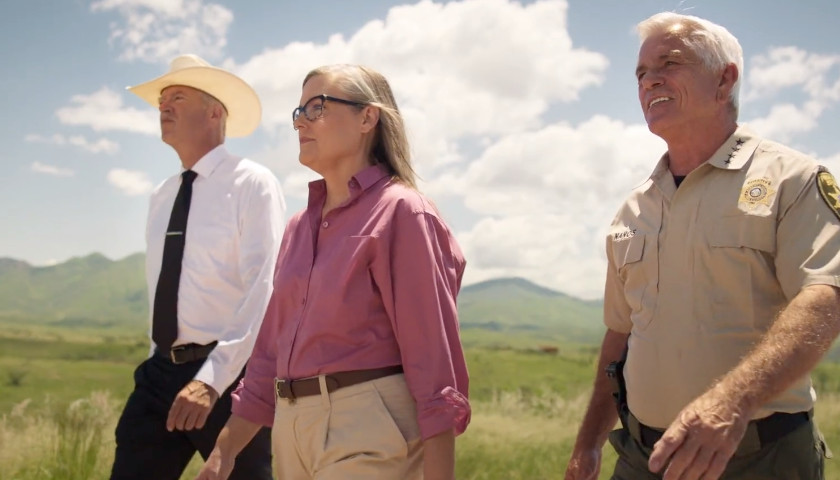 This, in response to the Hobbs campaign’s recent efforts to reposition the Democrat as a moderate.

Arizona Republican Party Political Director Jeremiah Cota contends Hobbs’ handlers are in the midst of a “desperate last-ditch attempt to change the tone of her campaign and clone herself as a ‘moderate.'” A recent ad from Hobbs states that she will “keep our border secure,” but Cota said in a statement that “this is far from the truth.”

He added, “This statement is absurd implying that the border was secure to begin with. On top of that, Katie cannot expect the people of Arizona to forget her atrocious record when it comes to border security. … She has actively worked against securing Arizona’s border her entire career. We view Hobbs and her team’s attempt to trick an entire state into forgetting her anti-border security history as an insult to the intelligence of Arizonans.”

Hobbs’ latest ad features her walking with two sheriffs, including Santa Cruz County Sheriff David Hathaway, who points out that he is a border sheriff.

We need less talk and more action when it comes to securing the border. My highest priority is keeping Arizona communities safe which is why law enforcement like Sheriff Hathaway and Sheriff Nanos are backing my campaign. Watch here👇 pic.twitter.com/4IpFuUJgND

“As a border sheriff, let me remind you, Katie Hobbs is on our team. She’s on our team of law enforcement.” He goes on, “Katie Hobbs will keep our border secure” as the headline “Katie Hobbs’ Plan to Secure the Border” with a link to the plan on her website flashes on the screen.

Hobbs’ plan to secure the border only appeared on her website recently. A snapshot of her website from June 8 shows it was not on there yet, even though she announced her campaign for governor well over a year ago in June 2021.

Her plan states in part, “We need to secure our border, prevent criminals and traffickers from entering the country, and end the chaos and lawlessness we’ve watched for decades. … Americans want a lawful and orderly immigration process. We need policies that encourage people to choose to participate in a tough but fair legal immigration process and disincentivize people from trying to enter the country illegally. … As governor, I will use the tools at my disposal to bring resources to our border communities and provide meaningful relief for Arizonans suffering the consequences of decades of federal inaction.”

Cota and the Arizona GOP responded with a lengthy statement with a dozen specific challenges to Hobbs’ “moderate” stance.

First, the Party statement noted, Hobbs “voted for lawless sanctuary cities.” In 2016, as a state legislator she voted against a bill that would have withheld state funding from sanctuary cities.

Second, Hobbs “tried to blame the Biden Border Crisis on former President Trump.” During a radio interview with KTAR, she said, “Look, Donald Trump ran on building a wall. He had complete control of Washington for two years and we don’t have a wall.”

Third, Hobbs “voted against tougher penalties for criminal illegal immigrants.” In 2016, as a state legislator she opposed two measures requiring tougher sentencing requirements for illegal immigrants convicted of crimes. Fourth, Hobbs couldn’t remember very well the last time she visited the border. During the KTAR interview, she responded when asked, “A few times in the last several months. I don’t know exactly when.”

Fifth, Hobbs “voted against the border wall.” She defended her opposition during an interview with The Arizona Republic, “”I could stand here and say, ‘Build the wall,’ and they’re gonna call me open borders. It really doesn’t matter what I say for the Republicans, they’re going to just misconstrue everything.”

Sixth, Hobbs “imagined no wall in Southern Arizona.” She said that during an interview with 12 News, and also said she wouldn’t fill in the holes in the wall.

Seventh, Hobbs “refused to rule out removing the National Guard from Arizona’s border.” Similarly, during an interview on AZ Family’s Politics Unplugged, when asked whether she would remove the troops, Hobbs responded, “I can’t answer that question because I don’t know what went into the determination to put the National Guard there.”

Eighth, Hobbs “supported Biden ending Title 42 border protections, then completely flip-flopped her stance.” In early April, Hobbs endorsed President Joe Biden’s move to lift the restrictions on the border during an interview on Politics Unplugged. But on April 25, during an interview with CNN, she urged Biden to reverse his “rash decision” and said lifting Title 42 “without a clear plan to secure our border would be a disaster.”

Finally, Hobbs “said ‘it’s ridiculous’ that border security is ‘a core issue in the governor’s race.’” She made the statement during an interview with The Arizona Republic in May. However, a poll taken in August from Rasmussen Reports and RMG Research found that 62 percent of likely voters in Arizona support building a border wall, and 56 percent consider the surge of illegal immigrants an invasion.

The most recent poll in the governor’s race, from the Trafalgar Group, shows Trump-endorsed Kari Lake ahead of Hobbs by almost one point. Hobbs has refused to participate in even one debate with Lake.

Rachel Alexander is a reporter at The Arizona Sun Times and The Star News Network. Follow Rachel on Twitter. Email tips to [email protected].
Photo “Katie Hobbs” by Katie Hobbs.