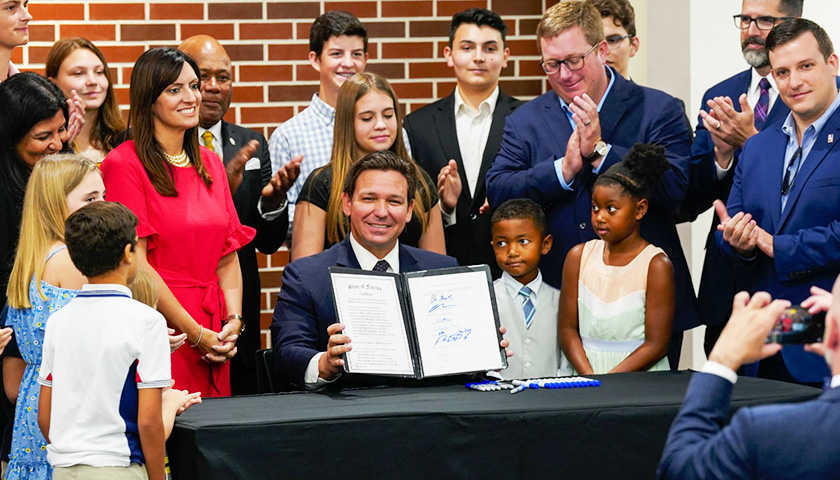 A national teachers union poll shows that positions adopted by Florida Governor Ron DeSantis are supported by most voters.

During Florida’s 2022 legislative session, DeSantis championed a number of education related bills that his opponents often labeled as extreme. During the session, Equality Florida, a LGBTQ advocacy group, released a television advertisement “blasting” DeSantis over his positions.

However, a battleground-state survey commissioned by the American Teachers Federation shows a majority of voters approve of DeSantis’ education policy positions.

For example, one poll question found that voters, by a 32 percentage-point margin, said they were more likely to vote for candidates who believe public schools should focus less on teaching race and more on core subjects.

Another poll question found that voters, by 27 points, said schools should be banned from teaching sexual orientation and gender identity to kids in kindergarten through third grade.

And by 28 points, another poll question found that voters agreed that transgender athletes should be banned from competing in girls’ sports.

Even when the poll asked about politicians who say schools “must stop ‘grooming’ students by encouraging them to question their gender identity or sexual preference,” respondents said they were more likely to back them, by 22 points.

The controversial use of “grooming” was introduced by the spokesperson for Governor DeSantis, Christina Pushaw.

Back in March, Pushaw tweeted that the “bill that liberals inaccurately call “Don’t Say Gay” would be more accurately described as an Anti-Grooming Bill.” And added, “If you’re against the Anti-Grooming Bill, you are probably a groomer or at least you don’t denounce the grooming of 4-8-year-old children. Silence is complicity. This is how it works, Democrats, and I didn’t make the rules.”

Overall, the poll seems to indicate that DeSantis is in touch with most voters related to education policy.

“DeSantis has been reasonably shrewd in choosing his culture war initiatives, avoiding toxic ideas like criminally prosecuting teachers,” Guy Molyneux, one of the pollsters who conducted the survey, said in an email to NBC News.

The pollster also offered a cautionary note. Molyneux said, “going forward I think he will struggle to distinguish his approach from general Republican efforts to enflame political wars in school systems, which voters really don’t want.”