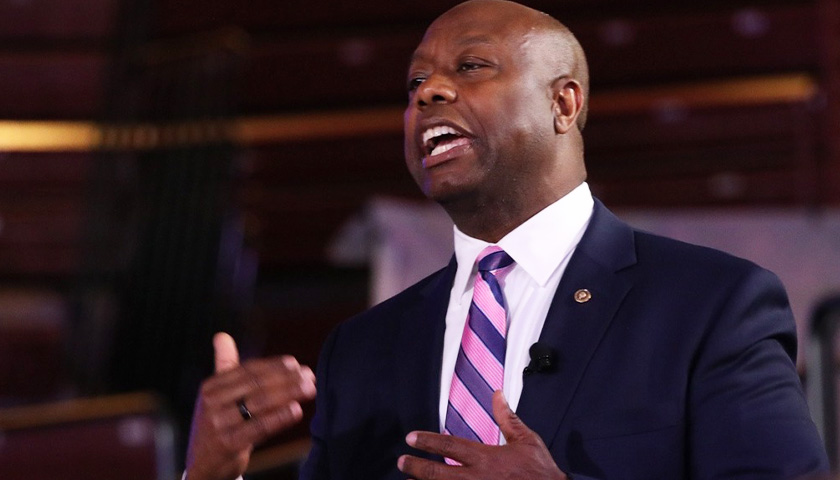 The Star was able to sit down with Senator Scott and conduct a one-on-one interview, arranged through Senator Scott’s staff and Williamson GOP Chair Cheryl Brown.

Senator Scott talked about what he sees in the future of the GOP, which he refers to as the “Great Opportunity Party.”

“I think the GOP, the ‘Great Opportunity Party,’ has a very bright future. The truth is carpe diem: this is the time to seize it. You look at the polling numbers of the president and the Democrats. It really is an opportunity for us – whether it is the African American community, the Hispanic community, the majority community – what we see consistently is the poll numbers are down. The question is why,” he said.

“The policies have failed to the left and we have an opportunity to show what we can do,” continued Scott.

“I think we’ve done that before. You look at 2016 and 2020. You look at the numbers – the unemployment numbers. Look at opportunity zones, have brought more actual dollars into poor communities – non-government dollars, perhaps the best programs, the lowest poverty rate in the history of the country in 2019,” he said.

“We can see by what we have done with the success that has been available. So if we can just continue to sell the economic opportunities presented by the Republican Party, plus the strength of our military and compliment that with education – making sure that every child in every zip code has quality education – our future’s very bright,” added the senator.

The Star asked Senator Scott what the public can expect from a GOP-led U.S. Senate after the November elections, if the Republicans do take the majority.

“If you ask voters what they are most concerned about, it is the economy, inflation, and gas. One of the things that we should do is to tackle those issues head-on. The fastest way to do that is to turn off the spigot. The fact of the matter is that when you give $4 trillion in economic assistance into the pockets of folks, you would expect their spending power to go up. The truth is, because of inflation, the actual spending power has gone down,” he said.

“So we’ll turn that spigot off and we’ll get back to certainty and predictability in the regulatory state and unleash the economic resources from energy to entrepreneurism, as well as research and development,” said Scott.

“It’s beautiful, number one. I love the ocean. I live in Charleston, South Carolina, so when you live near the ocean you appreciate it but stepping off the plane, driving down the road and seeing the mountains – how beautiful, how green it is – you know you’re in a beautiful place by just the terrain itself,” he said.

“Then you have an opportunity to start meeting and greeting people and you realize that there’s something about a Southern gentility – something about … the niceties that seem to come with that Southern atmosphere. You appreciate why the nexus of American growth seems to be in the Deep South and there’s no doubt that Franklin and Tennessee seems to represent some of that,” Scott added.

The Williamson County Reagan Dinner is an annual fundraiser for the county’s Republican Party.

Both the VIP reception and the general dinner were packed with hundreds of people, likely a credit to the team of the Williamson County Republican Party, which is chaired by Cheryl Brown.