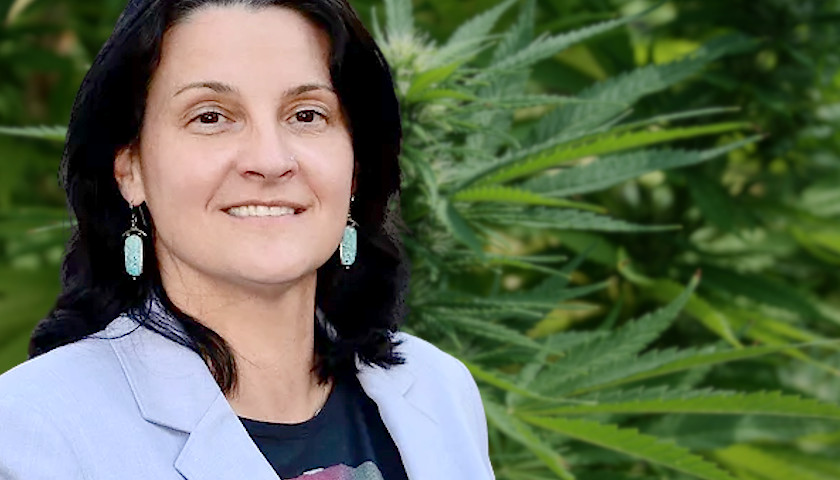 Delegate Dawn Adams (D-Richmond) was among a bipartisan group of seven delegates who voted against the budget on Wednesday. Adams criticized the Youngkin administration’s policies for state employees, but focused on language in the budget proposal that fails to adequately regulate THC in retail marijuana.

“We are now legalizing retail marijuana straight up. That’s what we’re doing. It’s just we’re going to call it hemp. And you can call it hemp, but it’s marijuana, and specifically until you have regulations, that does of marijuana that is now legal in retail stores can be anything as long as they put it on the package,” Adams, a nurse practitioner, said in a speech to the House of Delegates.

In 2018, the U.S. Congress passed the Farm Bill to legalize hemp for industrial use, with a limit on the percentage hemp can have of tetrahydrocannabinol (THC), the key psychoactive compound in cannabis. In 2020, marijuana was decriminalized in Virginia, and in 2021, possession of marijuana was legalized under Democratic control, with the associated retail regulatory structure needing passage again in 2022. That created a legal gray area for the marijuana market in Virginia, a problem that remains: in 2022, Republicans took control of the House, and did not advance that retail bill.

Before the budget vote Wednesday, discussion in Virginia had mostly focused on language in the budget that would add misdemeanors for public possession of certain amounts of marijuana.

But the budget deal passed Wednesday includes labeling requirements for hemp, an agricultural product. It also includes some packaging, labeling, and age limit restriction on selling products that contain THC. The budget is now waiting for Governor Glenn Youngkin’s amendments or signature.

However, Adams said that the new budget language doesn’t prevent concentrating THC in a final product.

“The hemp industry has used the farm bill of 2018 in ways that were unintended. The farm bill allows 0.3 percent of THC based on dry weight in hemp production,” Adams told The Virginia Star.

Adams said the hemp industry creates a concentrate out of the legal hemp plant.

“However the THC that is coming from these processors then made into consumable products have varying milligrams of delta nine THC,” Adams said. “In some of the products on the market today here in Richmond, the THC can be five milligrams, 10 milligrams, 15 milligrams, even 20 milligrams, but the state is imposing no restrictions on the milligrams for hemp-based THC, it is only requiring that information is put on the package.”

“The delta nine THC in these products can actually be higher than what is in the medical program that is highly regulated,” Adams said.

JM Pedini is the executive director of Virginia NORML, which lobbies for legalized marijuana. Pedini told The Star that in Virginia’s medical cannabis program, each individual dose is limited to 10 milligrams of THC.

That was included in State Senator Emmett Hanger’s (R-Augusta) SB 591, but that bill failed this year.

Like Adams, Pedini is critical of legislators for not regulating retail marijuana.

“They haven’t done that, and they haven’t been able to do that for quote ‘hemp’ because [Governor Glenn Youngkin’s] administration doesn’t want to, you know, appear to be coming down hard on hemp,” Pedini said. “There’s also this, I guess, party decision, caucus decision to not move cannabis policy for adult use forward. So it’s just like really clunky with the way it’s drafted. It just says that you can’t sell anything that you ingest that has THC in it to people under 21. And essentially as long as you’re putting a label on it that says ‘hemp’, it doesn’t say ‘marijuana’ but it says ‘hemp’ or it’s ‘CBD’ or whatever, then you can sell these products.”

Pedini said there are other problems, including which agencies have oversight authority, and a lack of funding for Virginia’s medical marijuana program.

In February, Speaker of the House Todd Gilbert (R-Shenandoah) tweeted, “Let’s be clear: Virginia Democrats made a great big mess when they legalized marijuana without putting any regulatory or retail structure in place. We are left having to clean up their mess and we will not make it worse by rushing to fix it.”

Eric Burk is a reporter at The Virginia Star and The Star News Network. Email tips to [email protected].
Photo “Dawn Adams” by Dawn Adams.