Tennessee House GOP Candidate Michelle Foreman: ‘There Is No Reason in the World That We Need to Have the Federal Government Involved in Education’ 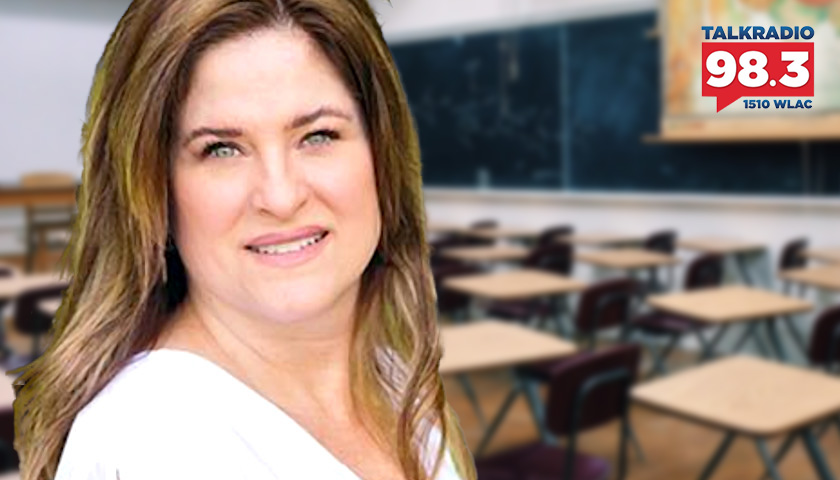 Leahy: In studio, our very good friend, Michelle Foreman, member of the Tennessee Republican Party State Executive Committee and a candidate for the state House of Representatives in District 59. The primary is two months and one day from today. Today’s, June 3rd. The primary is Thursday, August 4, 2022. Are you ready for the policy questions, Michelle?

Leahy: All right, here we go. I ask this question, Michelle, of every member of the Tennessee General Assembly that comes in here and we talk and even some folks that are just on the newsmaker line. And I’m going to ask you this. And this is my number one priority personally.

My question to you is, if you are elected and you serve in the Tennessee General Assembly in the session that begins in January of 2023, will you introduce legislation that tells the Department of Education here to take all that money from the federal government and say we don’t want it?

The 10 percent of all the money that is used that funds K-12 public education here in Tennessee comes from the federal government, but with it comes strings. I think it’s a disaster. Will you personally introduce a bill that says we don’t want to take a single dime of Department of Education money?

Foreman: That is a great question. The answer is, absolutely.

Foreman: Good. We are on the same page. (Leahy chuckles) There is no reason in the world that we need to have the federal government involved in education. We struggle. We really do struggle here in Davidson County. The last thing we need is an overreaching federal government, especially within the Department of Education and within our schools.

Our children cannot read and write at grade level. They’re graduating without being able to perform the fundamentals, the basics. They’re not college-ready. They’re not work-ready. They’re just not. So again, so many reasons not to take federal money and to focus on what we really need to do.

Leahy: Well, here’s the good news. You are the second candidate here to say that you would vote to send back all of that federal education money because, of course, with that money comes strings. And with the strings, it’s all the ridiculous woke junk that the feds under the legal but not legitimate Joe Biden want to happen in our schools.

Jody Barrett, who is running in the 69th district in Dickson County, sat in the same seat you’re sitting in right now earlier this week and said exactly the same thing. So at least there are two.

If the both of you get elected, we know that there will be two members of the state House of Representatives who will say, take that money and put it where the sun doesn’t shine to the federal government.

Foreman: I will say that the federal government has been overreaching for so long that really the state needs to lean in and push back and become the autonomous state that we were always meant to be. Every state in the union is meant to be autonomous, and we need to run our state and we do a good job running our state.

Leahy: Compared to 49 other states. In other words, if you’re going to say which states have been historically best run, I would argue, well, I’ve always everybody who comes on this program, people from afar, I let them know Tennessee is the best state in the country.

And the people said, oh, no, and they did the horn honking, the Killer Bs, MaeBeavers, Diane Black, Marsha Blackburn said, oh, no, we’re not doing that. We don’t have a state income tax. It’s in our Constitution now, subsequently, no state income tax. I think that’s been the single greatest driver of economic growth and migration into the state of Tennessee. Your thoughts?

Foreman: Absolutely. And people saw that, and my parents were a part of that.

Leahy: Were they horn honkers?

Foreman: They were horn honking to the point that they lost their horns. I’m sure many people did.

Foreman: And look what happened. That was a direct result of the people saying, not only will we not tolerate this. We will replace you if you don’t listen to us. And very thankfully, we had the three Killer Bs and they were able to help persuade along with the people, legislators who were looking out those windows and they saw the traffic, they heard the horns, and they said, “Hey, you know what? We better listen to the people who elected us.” They’re not messing around.

Leahy: And in this case, the people had the right answer.

Leahy: What are your other agenda items?

Foreman: I would like to see us close the primaries. Our primary elections. We’ve had a lot of difficulty over the years, but really ramping up with Democrat crossover. And I’m not talking about Democrats who truly feel drawn towards Republican issues and are more moderate.

I’m talking about this movement that we have were very liberal Democrats will crossover en masse to affect the outcome of a primary with the intention of remaining Democrat, the intention of throwing the primary election.

And I think that most people are unaware that that is a violation of the Tennessee code annotated. It’s actually a felony to do that. So we need to educate our electorate, but we need to go in and either close or partially close the primaries. What that means is registering with a party, Republican or Democrat.

Now in a partially closed system, you can register Republican or Democrat. The Independents that choose not to because they don’t want to affiliate, they’re not disenfranchised from a primary per se. They could potentially vote in either primary. That decision would be up to each individual party.

Leahy: So you’d have to register as a party.