Despite Calls to Withdraw, Earle-Sears Doubles Down in Speech at NRA Conference 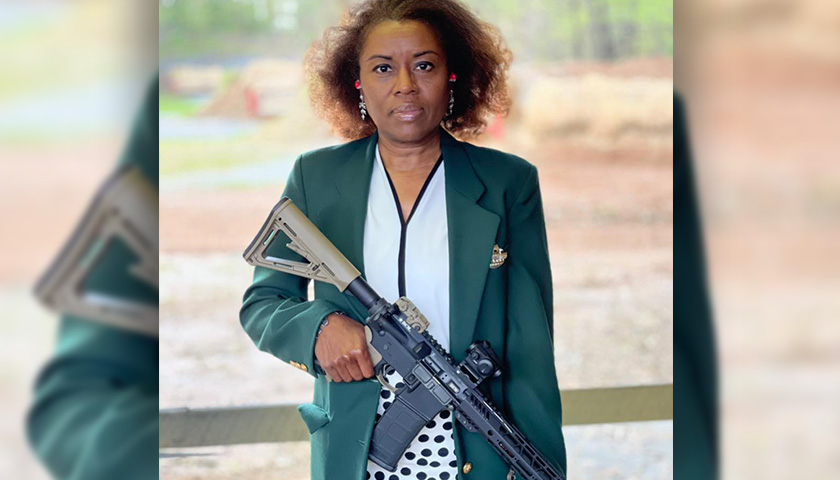 Lieutenant Governor Winsome Earle-Sears blamed a lack of virtue for the U.S.’ “present-day woes” in a Friday speech at the NRA Women’s Leadership Forum. After the May 24 shooting and mass murder at a Texas school, Earle-Sears faced pressure to withdraw from the speaking commitment, but instead doubled down, publishing her speech in a Friday press release and excerpts on Twitter.

“They did not want me to come, thinking you are monsters, that you are culpable in the murder of the children,” Earle-Sears’ written remarks state. “As you all know, the NRA was first established by Union veterans. I look at you, and I see mothers, daughters, sisters, and grandmothers, YOU are the NRA. People. You are not this nebulous entity. How far we have fallen that we have labeled you monsters, our fellow law-abiding Americans?”

In the GOP primary campaign, Earle-Sears, a veteran, posed with a military-style rifle in a high-profile photo featured in campaign material. In October 2021, the NRA donated $10,000 to Earle-Sears’ campaign, according to The Virginia Public Access Project.

In her Friday remarks, she acknowledged the Texas school shooting, saying, “This week, we Americans are once again grieving. It is a time to weep.”

“Indeed, we have left goodness, gentleness, and kindness behind, only to be left loathing, crudeness, greed, and sloth. Every man for himself, we are easily offended. Cruelty abounds. Forgiveness is a dirty word,” Earle Sears said, later adding, “We have proposed laws that say that a baby can be aborted up to the day of birth, yet we conduct surgery in the womb. Our language has degenerated such that F-bombs and even the startling MF bombs are spoken across our airways without so much as a gasp or even a clutch of the pearls, real or fake.”

“Virtue has signaled to us that we are to cease using her to destroy rather than build up,” she said.

Earle-Sears cited a lack of prayer in schools, sexual liberation, criminal justice reform, social media, and modern education as part of the reason for the U.S.’ problems.

“Even though little Johnny cannot read nor write, we socially promote him in the name of preserving his self-esteem in the short term, only to destroy him in the long term. And the media are complicit. Indeed, they are our modern-day sirens,” she said.

As solutions, Earle-Sears called for mental health reform, more officers and security measures in schools, more church and community involvement, more personal responsibility, and education for incarcerated people so that they have necessary skills to re-enter society.

Earle-Sears said that she and Governor Glenn Youngkin will designate Tuesday, May 31 a day of “Prayer for Peace in the Commonwealth of Virginia.”

She said that although the U.S. isn’t perfect, it is improving.

“Here I am, an immigrant, woman, Black, and yet, I am the Lieutenant Governor of the great Commonwealth of Virginia. I am second-in-command of the former capital of the Confederacy. God has brought us a mighty long way. In fits and starts, she is getting there – America is getting there. As the Lord said, Rachel will weep no longer. There is hope for our future,” she said.

After the speech was published, Earle-Sears faced more criticism from Democrats.

Senator Scott Surovell (D-Fairfax) tweeted: “This is your Lieutenant Governor Virginia – mass shootings happen because of:
– No prayer in schools
– Society emasculating men
– The breakdown of the family.”