Questions Swirl Around Law Enforcement’s Response to Uvalde Shooting; AP: SRO Driving Nearby, Not at Campus 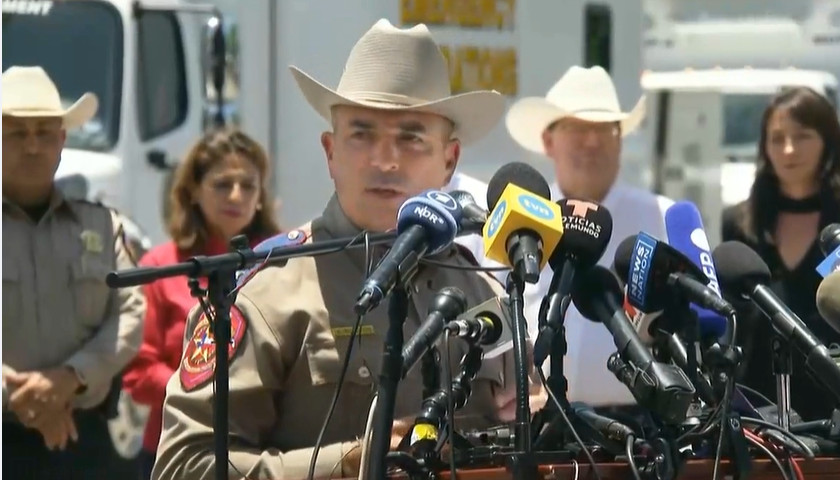 The director of the southern section of the Texas Department of Public Safety cut short his Thursday press conference as reporters shouted questions at him about why local law enforcement was ineffective for the hour after Tuesday’s spree shooting at Uvalde’s Robb Elementary School as gunshot victims languished inside. The crisis ended when Border Patrol Tactical officers arrived, engaged shooter Salvador Ramos, and killed him.

Reporter 1: “Eyewitnesses and some parents of the students were urging that the police go in while you were waiting for a tactical SWAT team. Even some parents were asking to borrow police armor, so they could launch a counterassault on the school.”

Escalon: I have heard that information, but we have not verified it yet.

Reporter 2: What haven’t you verified?

Escalon: “We have not verified that that is a true statement or not, or is it just a rumor out there – so, you got to understand, we’re getting a lot of information. We’re trying to track down what is true. We want to vet it.

That’s all I have for questions. Thank you so much, so look, we appreciate the questions.

Escalon: I got you. Yes, sir. I have taken all of your questions into consideration. We will have updates.

Escalon told the reporters he would circle back as he closed the presser.

When the press conference opened, Escalon put out two shocking corrections to the previous official timeline of events: there was no initial confrontation with a school resource officer, and the door to the school was not locked.

The Associated Press reported that an anonymous source said the SRO, the armed guard responsible for the school’s security, was driving nearby and not on the grounds when Ramos entered the school.

Black: Access control of a building is the key to the building’s security

Marc Black, who retired from the New York City police department as a detective investigator, said that while many people focus on armed guards, he focuses on a building’s access.

“This is my background from a security and vulnerability perspective from physical security,” said Black, who now is a senior fellow at the Washington-based Gold Institute for International Strategies.

“At all these shootings, here’s the question, and nobody in the press ever asks this. What are the access controls for the school? And where were they deployed? That’s an extremely important question,” he said.

“The access control needs to be robust, and it needs to detect, deter, deny, and delay the threat, so it gives enough time for the good people to distance themselves from the bad guys. Were the doors locked?” the detective said.

“Physical security is done in layers. Did they have security personnel outside the school who can observe the school if there was anything that was suspicious?” Black asked.

“Everybody thinks of the resource officer and guns. If you have a resource officer who’s going for their gun, did the physical security somewhere fail? That’s the last line of defense,” he said.

As troubling as these items were, now the emotional center of gravity for the Robb School shooting is the lack of action by local law enforcement.

Although there were officers in the school coordinating the evacuation of students, faculty and administrators, according to the official timeline, two officers were shot and injured by the shooter soon after he entered the school, and afterward, neither they nor any other officers engaged the shooter until the tactical unit arrived.

The Associated Press spoke to one parent of one of the dead students, who said he demanded the police take action to save the children inside.

Javier Cazares, whose fourth-grade daughter, Jacklyn Cazares, was killed in the attack, said he raced to the school as the massacre unfolded. When he arrived, he saw two officers outside the school and about five others escorting students out of the building. But 15 or 20 minutes passed before the arrival of officers with shields, equipped to confront the gunman, he said.

As more parents flocked to the school, he and others pressed police to act, Cazares said. He heard about four gunshots before he and the others were ordered back to a parking lot.

“A lot of us were arguing with the police, ‘You all need to go in there. You all need to do your jobs.’ Their response was, ‘We can’t do our jobs because you guys are interfering,’” Cazares said.

Black said after the April 20, 1999 shooting at Columbine High School in Littleton, Colorado, the NYPD changed its procedure so that patrolmen no longer waited for officers from the department’s Emergency Services Unit (ESU).

“In New York City, if something like this happens, you don’t wait for ESU,” he said.

Black said all officers are trained in the same procedures so that if officers from different parts of the city arrive at the scene of an emergency, they can work together.

“It’d be like this. Maybe we all have the same training. I never met you. You never met me, but coincidentally, now we have this situation, but we’re all trained to the same standard, and we go in,” he said.

“What we’re trying to do there is isolate the scene or actually stop the threat.”

Craig Evans, the Northern Virginia Emergency Medical Services Council executive director, said it is surprising that many gunshot victims can survive in a mass casualty situation if they are attended to in time.

“The primary injuries that you can help correct, as a paramedic or on-the-scene initially, are severe bleeding, sucking chest wounds and airway compromises – depending on where the bullet goes,” said Evans, who retired from the City of Fairfax, Virginia, fire department in 2020.

“If you want to survive a shooting, you don’t need a gun; you need a tourniquet and a 14-gauge needle, in case you have to do a chest decompression on yourself and some dressing, in case you have a sucking chest wound,” he said.

Victims with those injuries can survive, he said. “If those three things can be fixed immediately – but, an hour is a very long time.”

Evans said the Robb School shooting victims, especially the students, would not have much time to wait before they bled out from their wounds.

“The average 10-year-old weighs about 70 pounds so that they would have roughly 2.7 liters of blood,” he said.

Shock is when the body does not have enough blood to nourish tissue, and the body withholds blood from extremities to preserve the heart, brain and the core, he said.

All other gunshot injuries fall into one of two categories, Evans said.

“The majority of other injuries are either survivable, meaning you can go to the hospital the next day, or they are fatal,” said the member of the adjunct faculty of George Washington University’s Emergency Health Services Department.