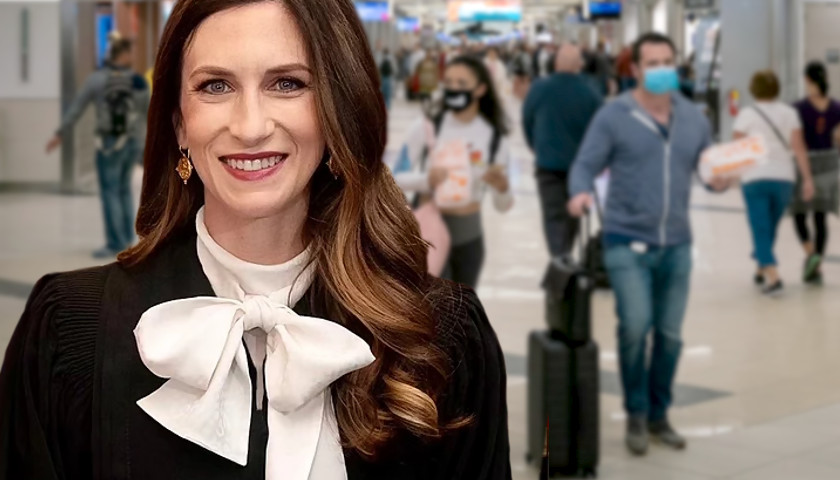 “The arguments that are pending in our ongoing lawsuit in Texas are the same arguments that prevailed in the case in Florida with a judge in Florida agreeing that the Centers for Disease Control did not have the statutory authority that it claimed to impose a face-covering requirement for all Americans engaging in transportation,” said Robert Henneke, who represents both the foundation and Texas Republican Rep. Beth Van Duyne in an independent lawsuit challenging both the CDC’s mask mandate and the Transportation Safety Administration’s derivative mandate that relies on the CDC’s now-overturned authority.

“Because our system does not permit agencies to act unlawfully even in pursuit of desirable ends, the court declares unlawful and vacates the mask mandate,” wrote the judge, who was nominated by President Donald J. Trump, and confirmed to the bench two weeks after the 2020 election, in her 59-page opinion. The plaintiff in the lawsuit was the Health Freedom Defense Fund.

“The court also held that the Biden Administration committed error when it implemented the mask mandate without going through the notice and comment requirements under the Administrative Procedures Act,” Henneke said.

The lawyer said the administration’s flawed regulatory process for the mask mandate fits into a pattern. “With the Biden Administration over the last two years of COVID, so much of their regulatory efforts have been attempted to be shoehorned through the CDC under a public health-type argument.”

Henneke said both his case and the Florida case focus on the constitutional process.

“The central questions in our lawsuit and the Florida case point to the fact that the Congress has never passed a law authorizing the executive brand to do this,” he said.

“The statute the CDC points to as its authority did not provide for this type of mandate,” he said.

Despite the good news, Henneke said he is still pressing on with his own case and watching for the Justice Department’s next step.

“Our case will continue,” he said.

“The opinion from the court in Florida is hot off the press, and it still remains to be seen how the Department of Justice will respond,” he said.

“Will they seek an immediate stay of the final judgment once it’s entered? I presume they’ll appeal,” the attorney said. “There’s still too much to be determined, but the determination from Florida is not dispositive yet of our case, or our case in Texas will proceed.”

Soon enough, the TPPF and Van Duyne lawsuit is their own day in court, he said.

“We’ll be updating our Federal district judge in Fort Worth today, making sure that the court is aware of today’s opinion out of Florida, but our case is fully briefed up, so we are waiting,” he said.

“At any moment we could be set for a hearing, or our judge issues his own opinion similar to this, that would resolve our case at the trial court here in Texas.”

Neil W. McCabe is the national political editor of The Star News Network based in Washington. He is an Army Reserve public affairs NCO and an Iraq War veteran. Send him news tips: [email protected] Follow him on TruthSocial & GETTR: @ReporterMcCabe.
Photo “Judge Kathryn Kimball Mizelle” by United States District Court for the Middle District of Florida and “Masked at the Airport” is by Chad Davis CC2.0.