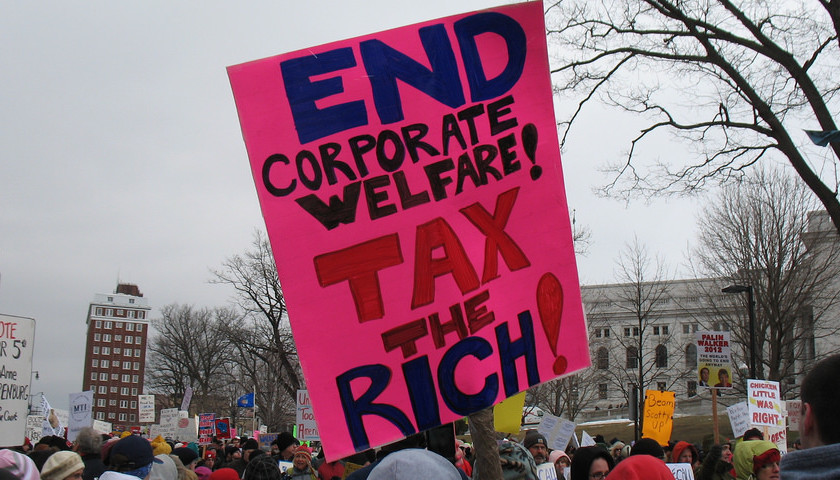 Big corporations and the super wealthy have to start paying their fair share of taxes. It’s long overdue.

I'm not out to punish anyone. All I'm asking is that you pay your fair share—just like middle-class folks do.

Instead of highlighting the few benefits of his Build Back Better Act, (H.R. 5376) his public positioning is about harming a particular group. Why? This message sells with three key constituencies he’s counting on to pressure Congress to vote yes.

Younger Millennials and Gen Z: Being Rich Is Inherently Bad

A recent PEW research poll revealed that half of adults under 30 believe billionaires are bad for the U.S. One self-proclaimed “anticapitalist” Millennial and trust fund beneficiary summed it up this way: “I want to build a world where someone like me, a young person who controls tens of millions of dollars, is impossible.” Accordingly, wealth comes from exploitation. Giving their money away (or giving it to Washington to redistribute into a social justice plan) is making “reparations.”

Using this logic, the late Steve Jobs should have been prohibited from earning ridiculous amounts of wealth. Because of his ingenuity, however, millions of jobs have been created, young people have been inspired, and some of the greatest technology has been made available. Like Jobs, those who earn their billions through innovation (and experience many failures in their pursuit and on their own dime) reinvest it in the economy in ways the government could not. Moreover, their earnings are a result of what others were willing to pay them.

A 2019 letter penned by more than a dozen of the wealthiest Americans — including George Soros, heiress Abigail Disney, and Molly Munger, daughter of Berkshire Hathaway Vice Chairman Charlie Munger— stated, “it is our duty to step up and support a wealth tax that taxes us.” They believe America “has a moral, ethical and economic responsibility to tax our wealth more.” Mr. Biden’s allies on the Left share this opinion.

A “transfer of wealth” by taxing the rich is nothing short of legal theft. Government is not, and cannot be, altruistic. Government has nothing to give that it has not taken from another by force. With few exceptions, this type of help will erode self-reliance and the moral incentive of charitable action, leading to more government spending.

Ignored is that the free market has done more to break the cycle of poverty than any government program, as it empowers people and mends the nonfinancial, relational parts of society.

The wealthy could put their money to better use by directly donating to effective charitable causes, investing in local communities, or investing in expanding their businesses to serve more consumers and create more jobs. Moreover, there is nothing stopping billionaires from giving their wealth directly to the U.S. government. If they genuinely believe it is their “moral, ethical and economic responsibility,” there is no need to wait.

They say it’s about social or economic justice, but President Biden’s messaging is déjà vu from Obama-era calls to redistribute wealth, or Marxist accolades of redistribution as a form of economic justice. The increasing popularity of taxing the rich makes the job of government elites easier. President Biden even engages in shame-tweeting such as, “Those at the top have been getting a free ride at the expense of the middle class for far too long.” But the bureaucrats’ real reason to tax the rich is to snatch individuals’ birthrights of personal responsibility, a move toward a centralized system that deflates personal choices and violates personal rights.

Taken together, these ideas unfortunately resonate beyond younger millennials and Gen Z, the working rich, and the governing elites. Jumping onto the “tax the rich” bandwagon feels good because – why should the rich have that much money anyway?

The actual tax burden will not fall on folks writing checks to the US Treasury. The rich will, for the most part, still be rich. It’s the middle- and working class who will pay dearly when high-income individuals respond to the tax hike by simply investing less, resulting in fewer job opportunities and lower wages.

Left to fend for their economic lives will be small-business owners. President Biden may consider them wealthy, but taxing these individuals more will decimate communities, as jobs are lost or not created, and wages and hours are cut.

There’s no question that taxing the rich is popular. Problem is, it’s also reckless.