Students Meet to Move Campus ‘Beyond Policing’ After Shooting Near Campus 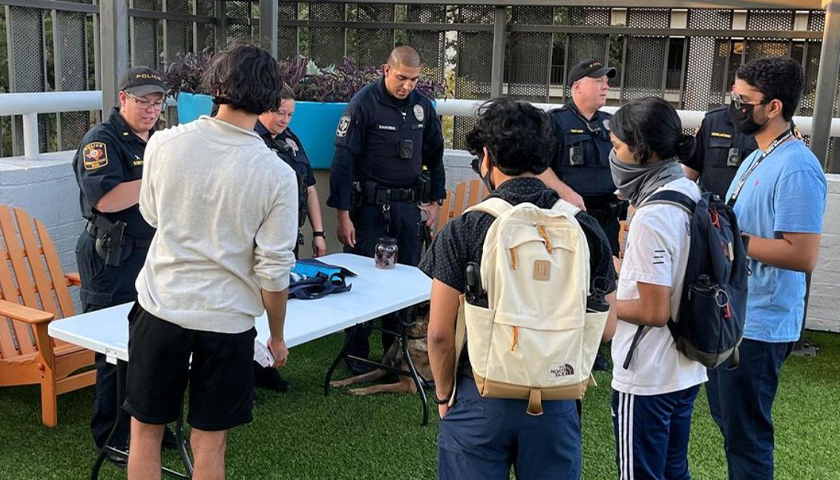 by Alexa Schwerha and Sterling Mosley

After a shooting involving two non-university individuals occurred near the University of Texas at Austin over Halloween weekend, a segment of the student body is working to realize a vision of campus safety “beyond policing.”

Following the incident, The UT Senate of College Councils hosted an event titled “Campus Safety Beyond Policing” during which students discussed various ways to pursue a supposedly safer campus without needing UTPD.

The event was led by the Equity and Inclusion Team of the Senate of College Councils, which opened up the meeting by stating that the purpose of the meeting was to “gain insight into what safety means to you beyond policing and how to best advocate for your needs.”

Exclusive audio obtained by Campus Reform reveals that many students voiced their concern about the shooting and advocated for increased mental health services, food security services, and increased lighting in the neighborhood of West Campus, where the shooting occurred, rather than an increased police presence. Some students stated that they were afraid to contact UTPD because of their belief that the police would do more harm than good.

Students expressed a common feeling of being unsafe in West Campus. One student said in regards to the shooting that “Where I was I could see everything that was happening [the shooting] and I didn’t know who to call if I felt that my life was in actual danger.”

“A lot of us feel uncomfortable or lack a sense of security when walking back to our apartments, whether it be from lack of lighting in these areas or a general sense of not being safe,” said another student.

Although students acknowledged that they felt unsafe on campus, they suggested that the police department was not the answer. “They [UT Administration] already increased UTPD last year to have a sector… specifically for the Drag, and all that’s really done is further criminalize the unhoused population, so increasing the funding for police doesn’t really do much for student safety. I think that the $8 million should be reallocated to something like EMS,” said one student.

“When I think about 911, I don’t think about safety. I don’t feel actually safe and I don’t associate that with something that is good and I feel that if that’s what it’s supposed to be, then it isn’t that anymore,” said one student.

“Students need to feel comfortable and so like having something other than police would be good. Something more of a helping hand. Somebody that you’re not going to feel scared, or nervous, or worried for their own life just by trying to get some help… It’s kinda crazy to me to want to call somebody that you think is going to do more harm to you than good.”

With the backing of the Senate of College Councils and the Cops Off Campus protest, students clearly are having a discussion about the role of police on campus, one that seeks to diverge funding or abolish UTPD altogether.

The shooting occurred in the neighborhood of West Campus near 22nd Street and Pearl Street, with the initial call reporting potential gunfire at 10:40PM. Confusion arose when contradictory claims relayed to Emergency Communications that fireworks were being set off in the area. This led to an initial report that the total response time of the Austin Police Department (APD) was 50 minutes.

This has since been corrected to properly relay the timeline of events following a statement from the department.

At 11:21PM, APD received additional information pertaining to shots fired and pedestrians fleeing, leading to the first officer arriving on scene at 11:31PM. The total response time was ten minutes.

“Some news outlets have misreported that there was a 50-minute response time. There may have been confusion due to multiple firework calls that happened in the area, prior to the actual shooting incident that occurred,” APD released in a statement.

Five University of Texas Police officers were on the scene, as well, arriving shortly after the second call at 11:46PM. The response came immediately after hearing the report on the APD Baker District radio.

UTPD Director of Strategic and Executive Communication Noelle Newton told Campus Reform that the department responds to crimes in progress in the West Campus neighborhood often to “-pass along information as a courtesy to our students so they may take appropriate safety measures”.

“Our new efforts will build on the $8 million investment from our Board of Regents to create a campus patrol district, hire new officers, install a network of security cameras, and establish a UTPD west campus satellite office,” University President Jay Hatzell said in a statement. “I appreciate the work of our university law enforcement and the Mental Health Assistance and Response Team, as well as their unwavering commitment to protect our students, faculty, staff, and visitors.”

Newton affirmed this in a statement to Campus Reform, stating that, “We have increased presence in West Campus. Our officers are out in uniform walking, on bikes, and in vehicles. Our goal is to be visible and approachable. At night we may use our white alley lights that shine on either side of our patrol cars to ensure our presence is known, illuminate dark areas, and deter criminals.”

Not all students are on board with this agenda.

Since the incident, concerns among students have escalated as the University responded with additional safety measures to be implemented on campus. As reported by Campus Reform, a student-led group on campus, called Cops Off Campus, responded to the announcement by organizing a protest on Thursday to demand the removal of police presence from the University.

The advertisement, posted on social media, describes the measures as a way to “-repress students and harass the surrounding houseless population.”

“Police do not protect or serve the community,” the post said. “[T]hey serve property- and they are willing to kill to do it.”

Students in attendance held a large banner reading “Students & Workers Demand Cops Off Campus”, and carried signs with slogans such as “ACAB,” “Cops Off Campus,” and “Hartzell Doesn’t Care About Safety.” They also handed out QR codes to students, referring them to a student-made manifesto titled “Eyes Upon You” addressing “the troubled past and present of the University of Texas at Austin”.

Leadership Institute Campus Ambassador Carter Moxley, a sophomore at the University of Texas, told Campus Reform that while many students are dissatisfied with the University’s initial response to the shooting, there is still a need to support University Police or alternative methods.

According to Moxley, many students’ concerns lie with how the situation was communicated to campus residence, citing limited announcements stirring anxiety for students in close proximity to the disturbances.

My friend’s apartment window faces the direction of the shooting incident in West Campus and she feared for her life. Without consistent communication from The University or UTPD, she did not feel comfortable on campus, let alone her own apartment. Women who commute from West Campus to their classes or the library, especially at night, never feel comfortable in their neighborhoods. With less police surveillance, criminals have a free for all opportunity to prey upon the college students who call West Campus home. The UT Student Government believes they can solve this issue; however, the City of Austin has jurisdiction in this matter because the criminals typically do not reside or have any ties to The University.

Concerning the protests, Moxley claimed that it is a minority of students and noted their cause as “hypocritical.”

“It’s hypocritical that these students who are so against the police and [for] defunding the police, that they are willing to risk the safety and wellbeing of residents and students in West Campus and on campus,” he stated. “Having UTPD on campus, they serve as a sort of bulwark against crime here on campus when places like East Austin, or often in general, have been suffering because there is a lack of police officers.”

Despite the opposition, Moxley affirmed that there still remains a pro-police support system on campus. Early in the semester, the Young Conservatives of Texas chapter conducted a “Back the Blue” event on campus, where they encouraged students to write thank-you letters to UTPD and show their support. He says this type of activism will continue.

“We’re also reporting on it via the Texas Horn trying to make sure that students know these things are going on,” he said, referring to the on-campus student-run news publication. “Reporting, doing events like ‘Back the Blue’, and then the work we did with Proposition A, that’s what we’ve done so far.”

Campus Reform has reached out to Cops Off Campus, the Senate of College Councils, and the university for comment, and will update accordingly.

Alexa Schwerha is the Regional Field Coordinator at Leadership Institute for Texas and New Mexico. She attends Kent State University and is studying Communication Studies and Political Science. On campus, she served on the executive board of the Kent State Turning Point USA chapter, founded Students for Trump at Kent State, and was the Campaign Liaison for the Kent State College Republicans.
Photo “#NationalNightOut ” by utaustinpolice.