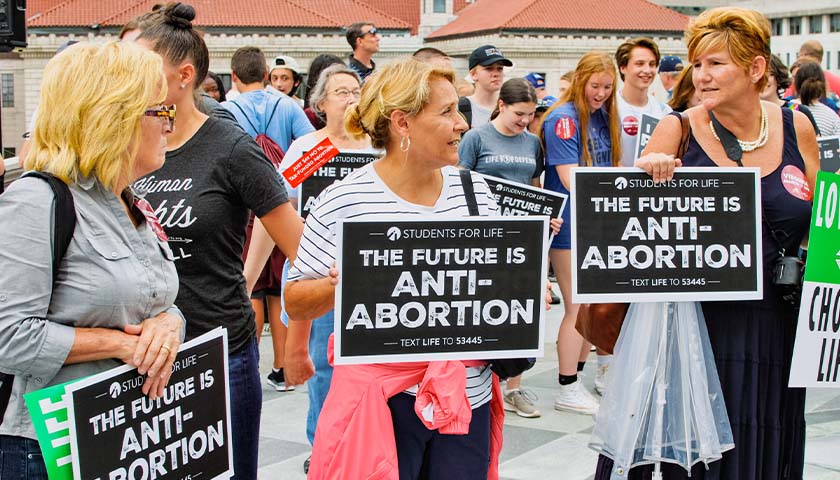 The 375 women signed affidavits describing how they were harmed by their abortions, detailing injuries including punctured uteruses, punctured colons, sterility and excessive bleeding, among other side effects.

One woman whose cervix was sealed by scar tissue from an abortion she had the month before her wedding described her and her baby nearly dying in childbirth from a later pregnancy. She suffered 13 years of infertility and had four miscarriages after her only child was born.

The affidavits were collected as part of Operation Outcry, the world’s largest collection of legally admissible testimonies from women harmed by abortions. Allan Parker, president of the Justice Foundation, began collecting them when he was lead counsel for Norma McCorvey, who identified herself as the Roe of Roe v. Wade, as she pushed to reverse the landmark ruling made on her behalf. The Supreme Court will hear oral arguments on Wednesday in Dobbs v. Jackson Women’s Health, which relates to whether prohibitions on abortion services in the second or third trimesters of pregnancy are constitutional.

The affidavits include many complaints that the patients did not understand the procedure, were not aware of how developed the baby was and were not informed of the physical and psychological side effects of abortion. Numerous women said doctors told them the baby was not a person but a clump of cells.

“I was told what I had inside me was a piece of flesh, not a baby. I was told that having an abortion would be the solution to ‘my problem,’ being pregnant,” one woman wrote. “I was told I would have no side effects later if I wanted children. I was not told about the deep emotional and psychological suffering I would go through,” she said in her affidavit.

U.S abortion law is out of touch with the rest of the world.

In fact, the U.S. is just ONE of SEVEN countries – including China and North Korea – that allows elective abortion past 20 weeks' gestation.https://t.co/GuAevbRefC

She went on to describe her subsequent struggles with addiction and depression and her numerous attempted suicides. She said her lack of self-worth, a result of the abortion, drove her decision to stay in a relationship after being raped.

Abortion advocates have pushed campaigns aimed at telling stories of women who were positive about making the decision to end a pregnancy. The #ShoutYourAbortion social media movement was popularized in 2015 to destigmatize the procedure and celebrate its accessibility. The movement encouraged women to be vocal about their abortions and unashamed.

Actress Michelle Williams delivered a speech at the Golden Globes in 2020 claiming she could not have become an award-winning actress without the abortion she had earlier in life. She was pregnant and the mother of a 14-year-old at the time.

One woman whose testimony is quoted in the amicus brief said no one told her what was actually involved in abortion before she had hers. “I was not given any literature spelling out or illustrating what I was about to do. I was a lot later in the pregnancy than I thought I was,” she testified. “They initially said they thought I was too far along, but did a pelvic exam and then decided they would go ahead and do it.”

She recalled the doctor saying, “I think that’s the biggest one we’ve ever done.”

“Those words haunted me,” she said.

Many of the women described emotional and psychological trauma, including addiction and attempted suicides, as a result of their abortions.

“When I ended that life, I ended my own,” one woman said of the abortion she had at 13-weeks while stationed in Germany for military service. She wanted to keep her baby but felt pressured to abort due to her life circumstances. “I ate right, talked to her, and cherished her while I had the chance, knowing what I had planned to do,” she wrote.

“I am 46 years old now and I deeply regret having killed my child. He or she would have been 28 years old now,” she testified. “I have never been able to complete anything I’ve ever begun in my entire life to this day. I have had bouts of depression and suicidal ideations throughout the years. The guilt never leaves me, although I know God has forgiven me, I can never forgive myself or excuse myself,” the woman said.

“I have been and am bulimic. I have tried to kill myself with food. I have overdosed on drugs at least 3 times. I have tried to hang myself once. Tried to cut my wrist once. Abused drugs and sex with many partners. I have hated myself,” she wrote. She now has two adult children.

The women who did not report major physical or psychological injuries expressed enduring grief over their abortions and a dark cloud hovering over their marriages and family relationships.

“I have been left feeling ashamed and guilty for taking a life” one woman wrote about the abortion she had in 1984. “I have seen visions of a girl baby throughout my whole life. It has affected my relationship with my husband. I was 20 years old when I had the abortion and it has changed my life forever.”

An Alabama woman described an abortion she had at 16 years old in 1971.

“I became depressed and rebellious. I went from a straight A student to just passing. I began to drink and got into drugs. I married the first boy I could talk into marrying me (at age 16) … That marriage resulted in years of physical abuse which, again, I endured because I had no self worth,” one woman testified.

“Every year in October I get sad, I would cry for just about the whole month. Over the years I became a full blown alcoholic which I have since overcome. I developed clinical depression for which I still take medication. I still morn the child that was lost to abortion,” she said.

When asked how her abortion had affected her, an Arizona woman who aborted at 14 weeks testified, “How hasn’t it? Severe depression, nightmares where I see my child dragging its mangling limbs behind as it walks towards me, knowing I’ve killed my own child, feelings of inadequacy as a mother to my children born afterwards…My resulting depression has had negative effects on everyone in my life.”

Many of the women expressed that they were pressured to have abortions by their boyfriends, partners, parents or extended families. A significant portion of the women in the brief entered abusive relationships after having an abortion.

When asked how they would advise another woman seeking an abortion in the affidavit, the woman overwhelming advised against the procedure.

“Respect for human life finds an ultimate expression in the bond of love the mother has for her child,” Former Supreme Court Justice Anthony Kennedy wrote in the majority opinion for Gonzales v. Carhart. “It seems unexceptionable to conclude some women come to regret their choice to abort the infant life they once created and sustained. Severe depression and loss of esteem can follow.”