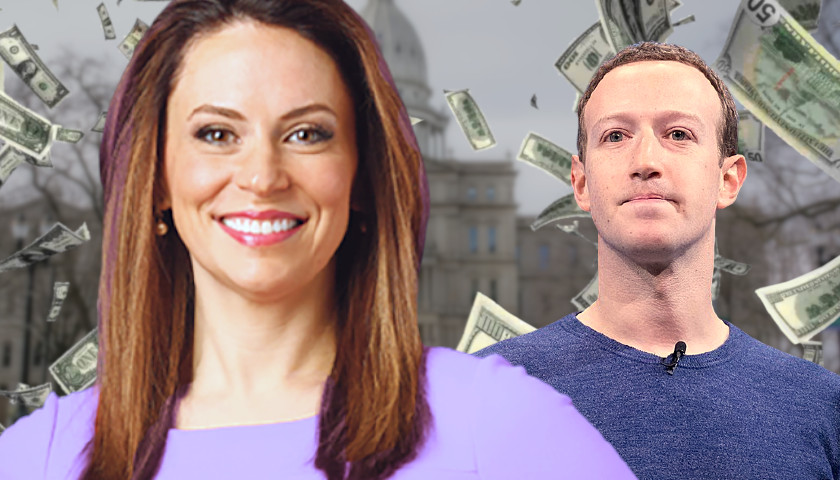 Can President Trump move the ball in Michigan to get legislators to do a serious investigation into how outside money was spent in the 2020 election?

No one else has been able to get legislators to pay attention to the $12 million that Facebook CEO Mark Zuckerberg shipped to an obscure supposedly “non-partisan” non-profit to influence voters in Michigan, but gubernatorial candidate Tudor Dixon hopes that a recent email by Donald Trump will spur action.

Dixon, who is running in the crowded Republican primary, said she was as surprised as anyone to find out that Trump had sent an email to his followers that promoted an article she had written on the need for an investigation into the 2020 election, but she wasn’t shocked.

Trump sent an email on Wednesday that cited Dixon’s article entitled “Zuckerbucks in Michigan Went to Democratic Nonprofits,” breathing new life into a controversy that has simmered for several months.

“I did not know that was coming,” Dixon said about Trump’s email. “But I understand he’s very concerned with the election, and this is something that his team is looking at. We have to look at how this money in particular is coming in from an industry that has silenced conservative politicians and conservative voices, and is now putting millions of dollars into elections for swing states.”

Dixon said she wrote her August 23 op-ed to encourage the House Oversight Committee to hold hearings and take testimony from Secretary of State Jocelyn Benson and others about how this massive amount of outside money was used in the 2020 election. But so far the legislature has not taken up the challenge.

House Oversight Committee Chairman Steve Johnson and Senate Oversight Committee Chairman Ed McBroom have turned down numerous requests for interviews with The Michigan Star. Sen. McBroom’s committee issued a report on the 2020 election in June, but left blank the section on “3rd Party/Private Funds Used for Public Election Activities and Equipment.” Johnson was said to have planned an investigation into the Zuckerberg money, but has not yet done so.

Dixon hopes that Trump’s acknowledgment of the many questions surrounding the Michigan election in 2020 may encourage action.

“We’re very excited that President Trump is sharing that information,” Dixon said. “Right now the issue is falling into the darkness, and most people don’t realize how these Big Tech dollars can have an influence on how people vote. President Trump is the leader of our party. It is important for him to make sure that the issue is understood.”

Dixon published her op-ed at americangreatness.com and cited earlier reporting by The Star about how $12 million of money was given by a Zuckerberg-funded non-profit to the Michigan Center for Election Law and Administration (MCELA) allegedly to promote voter education. The problem was that the Michigan Center then forwarded $11.8 million of its grant to two Democratic consulting firms, and no one knows how it spent its money.

Adding intrigue to the story is that Secretary of State Benson, a highly partisan Democrat, is the founder of the Michigan Center for Election Law and she served on its board through 2020 when the Zuckerberg money was funneled into the Michigan election process. She also became the face of the MCELA “get out the vote” campaign by filming videos for the nonprofit’s Facebook page.

“We know we have a secretary of state who did things that have never been done before such as sending absentee ballot applications to all of the state’s voters,” Dixon said. “It could be something nefarious. We don’t know. Oversight is absolutely needed. We know Michigan was a state that was a target for Democrats,” so it’s vital to determine how outside money was used to influence elections.

“I think it’s especially important when you’re looking at the fact that it’s coming from Big Tech — corporations that already have the ability to alter the public’s perception through the tactics they use on their social media entities,” she said.

“So when you see someone like Mark Zuckerberg come in and give that kind of money to the state of Michigan and then you see a government official take that money and funnel it into [organizations] that have historically worked for Democrats, to get Democrats elected, this is very suspicious.”

Dixon, who is a former news anchor at Real America’s Voice, thinks it is self-evident that Zuckerberg was trying to influence the election to benefit Democrats.

“When you have access to those types of dollars that you’re putting into a state, exactly what are you trying to do? When we look back at 2020 and ask ‘How is it possible for a Joe Biden to get more votes than even a Barack Obama?’ you have to say that if there is suspicious money going into the system and being funneled through by government officials, this is not OK. People should be held accountable.”

Senior investigative reporter Frank Daniel Miele is the author of “What Matters Most: God, Country, Family and Friends.” Visit him at HeartlandDiaryUSA.com to read his archived commentary or follow him on Facebook @HeartlandDiaryUSA or on Twitter or Gettr @HeartlandDiary. Email him at fmiele.starnews@yahoo.com with news tips.
Photo “Tudor Dixon” by Tudor Dixon. Photo “Mark Zuckerberg” by Anthony Quintano. CC BY 2.0.