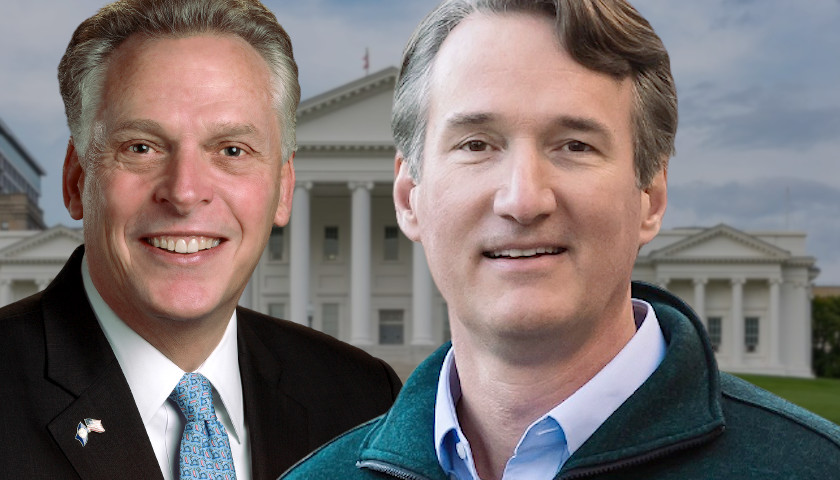 Virginia’s gubernatorial race is a tie among registered voters, according to a new Monmouth University poll, which found that Republican Glenn Youngkin has made gains against Terry McAuliffe since the university’s September poll.

“Youngkin (46 percent) and McAuliffe (46 percent) hold identical levels of support among all registered voters. This marks a shift from prior Monmouth polls where the Democrat held a five-point lead (48 percent to 43 percent in September and 47 percent to 42 percent in August),” the poll’s press release states.

The polling sample was 1,005 registered voters with a plus-or-minus 3.1 percent margin of error. It did not include third-party candidate Princess Blanding, although there was two percent support for “Other.” Monmouth conducted the poll from October 16 through October 19.

However, Monmouth’s model for “certain” or “likely” voters shows McAuliffe ahead, 48 percent to 46 percent.

“Which means for all the headlines — including this one — showing an optimistic RV [registered voter] split of TIED! (TM), the reality is that McAuliffe is still edging out Youngkin by about 60,000 votes,” Shaun Kenney wrote in an email newsletter from The Republican Standard.

“A range of probabilistic likely electorate models shows a potential outcome – if the election was held today – of anywhere from a three-point lead for McAuliffe (48 percent to 45 percent) to a three-point lead for Youngkin (48 percent to 45 percent). This is the first time the Republican has held a lead in Monmouth polls this cycle. All prior models gave the Democrat a lead (ranging from two to seven points),” the release states.

GOP enthusiasm, already high compared to Democrats in previous polls, has grown. President Biden’s approval rating is down to 43 percent among Virginia voters. McAuliffe’s favorable rating has decreased as well, to 33 percent, while Youngkin’s stayed stable at 41 percent.

“Motivation tends to be a better indication of turnout than self-reported enthusiasm. The gridlock in Washington certainly plays a role in dampening Democrats’ mood, but there are some stumbles on the part of the McAuliffe campaign that have also had an impact. Either way, this voter engagement gap is good news for Youngkin,” Monmouth Polling Institute Director Patrick Murray said in the release.

The poll found that Youngkin has gained trust with voters on education and schools, and now matches McAuliffe’s rating on those issues. Youngkin also has a trust advantage on jobs and the economy, taxes, and matches voters’ trust of McAuliffe on abortion.

“The Monmouth poll finds that a recent shift in voter issue priorities has helped Youngkin,” the press release states, noting that top issues are jobs and the economy, and education and schools, while the pandemic has decreased in importance.

“McAuliffe’s sizable edge on handling Covid and his competitiveness on economic issues last month helped put him ahead in this race, but Youngkin has been able to change the terms of the debate, by using his opponent’s words on parental involvement in the school curriculum to shift voter attention on that issue,” Murray said. “Not only has this eaten away at the Democrat’s previous advantage on education policy, but it has also raised doubts about McAuliffe’s ability to handle the pandemic.”