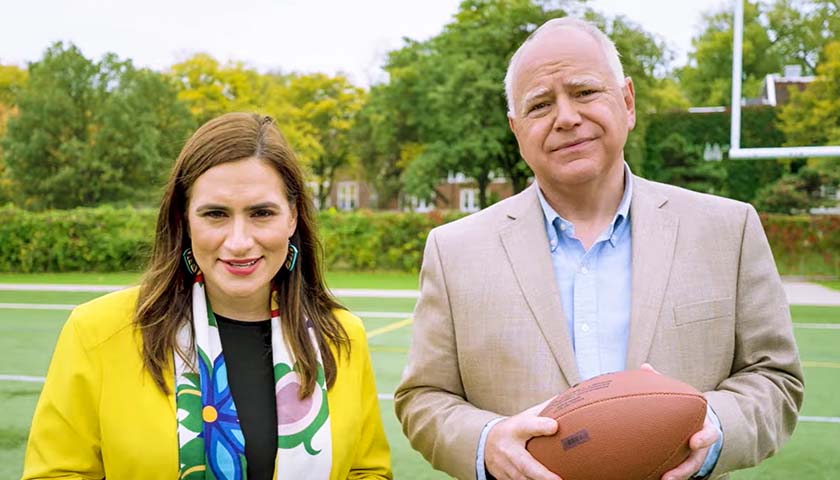 Minnesota Governor Tim Walz (D) announced his reelection campaign on Tuesday. Walz is the seventh gubernatorial candidate to place a bid and the only Democrat to have entered the race so far.

I’m running for re-election with @PeggyFlanagan to keep moving Minnesota forward. Our fight against COVID isn’t over, but we’ve got the ball and we’re making progress.

Together, as One Minnesota, we can rebuild stronger than before. We hope you’ll join us! pic.twitter.com/B2IaGnCPqF

Walz tweeted out he is “running for reelection with Peggy Flanagan to keep moving Minnesota forward.” Walz said, “Together, as One Minnesota, we can rebuild stronger than before.”

The reelection campaign video touted supposed successes when it came to COVID vaccinations, saying that he “saved lives by following the science.” It also highlighted alleged “economic recovery” from COVID.

Walz and Flanagan are running under a call for unity, “One Minnesota.” Other points of interest included police reform, child care, and the goal of “moving towards 100% clean energy by 2040.” The campaign also claimed that Walz cut taxes for the middle class by nearly $1 billion.

Jensen later tweeted out that he welcomes Walz to the race and is looking forward to “having a conversation with Minnesotans about his record.” Jensen said Walz’s term as governor of Minnesota was a “stark failure in leadership.”

I welcome @GovTimWalz to the race and look forward to having a conversation with Minnesotans about his record. pic.twitter.com/Ed8hZUHGgJ

Paul Gazelka, the former Minnesota Senate Majority Leader and another Republican candidate for governor, also responded to the announcement from Walz. Gazelka said that Walz is and has been pursuing “policies disastrous for our state.”

Gazelka disagreed with Walz’s claim to seek unity. He said, “Tim Walz’s ‘One Minnesota’ mantra is not an appeal for unity; it is a cover for a coercive, one-size-fits-all approach to governing through more regulation and bite by government out of hardworking Minnesotans’ paychecks.”

Hayley Tschetter is a reporter with The Minnesota Sun and The Wisconsin Daily Star | Star News Network. Follow Hayley on Twitter or like her Facebook page. Send news tips to [email protected].
Photo “Gov. Tim Walz and Lt. Gov. Peggy Flanagan” by Tim Walz for Governor.