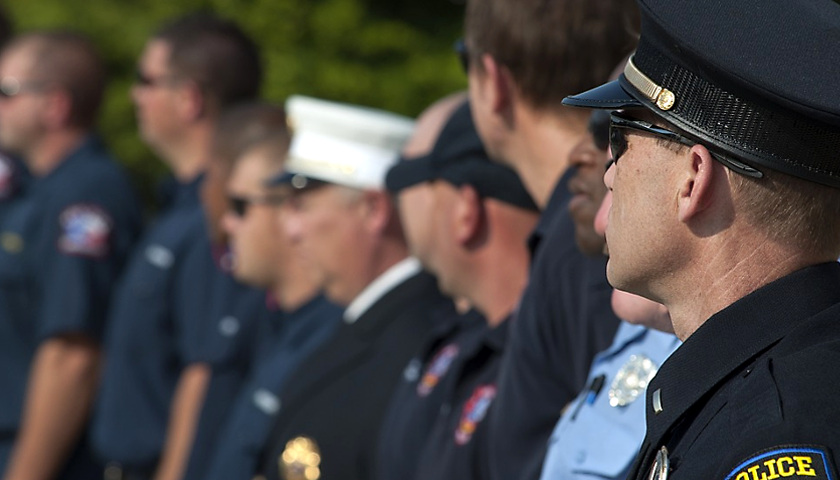 “Nobody hates a bad cop more than a good cop. Qualified Immunity is to protect the good cops,” added Sheriff Partin.

Qualified immunity, per the Code of Virginia Section 8, is a legal protection mechanism for law enforcement and correctional officers across the Commonwealth of Virginia from civil suits from defendants. This doctrine was introduced by the US Supreme Court Case Pierson v. Ray in 1967 and was codified in many states.

But in the wake of the death of George Floyd, states across the country looked at methods of reforming law enforcement. Some states chose to remove qualified immunity. Virginia attempted to in 2020, which made this a marquee issue of the 2021 campaign cycle.

McAuliffe is currently brawling with the Republican nominee Glenn Youngkin for the keys to Executive Mansion. In April, the former DNC Chairman’s spokesperson Jake Rubenstein released a statement in support of ending qualified immunity, but now is on record saying he supports qualified immunity in both of his debates with his Republican opponent.

McAuliffe was so adamant in his support of keeping protections, he shouted angrily at Sheriff Partin when he was questioned about the issue. The agitated former governor told Partin, “I don’t care what you believe.”

Sheriff Partin told The Star, “I don’t know anyone in law enforcement who actually believes Terry McAuliffe when he says he won’t end qualified immunity.”

Partin endorsed Youngkin early in the convention season and has since starred in multiple campaign television ads. Partin sternly looks into the camera in the ad below, saying that “[i]t’s been a tough year, but it helps when elected officials have our back. Terry McAuliffe doesn’t have our back…Virginia won’t be safe with four more years of Terry McAuliffe.”

Since the beginning of his campaign in January, Youngkin has forcefully supported keeping qualified immunity. Youngkin repeated his support in his major “Day One Game Plan” policy announcement speech, where he outlined the policy agenda of his campaign.

She sponsored the bill to remove qualified immunity in the 2020 General Assembly Special Session. Ayala voted in favor the final passage of the HB 5013, along with Delegates Dawn Adams (D-Richmond), Cole, Wendy Gooditis (D-Loudon), Dan Helmer (D-Fairfax), Chris Hurst (D-Blacksburg), and Nancy Guy (D-Virginia Beach), and Delegate Roslyn “Roz” Tyler; all of which are locked in competitive races for control of the House of Delegates.

In that specific General Assembly session in 2020, Delegate Tyler voted five separate times to end qualified immunity. Tyler, the longtime incumbent who many consider being the only member of the Black Caucus to represent a rural district, has been looking to shore up her support with law enforcement by glossing over her 2020 vote to end qualified immunity. In a recent letter to her constituents, she advocated for police saying, “And I will always stand by our law enforcement and corrections officers…”

Ultimately, HB 5013 died in the House Committee on Courts of Justice and was then referred over to the House Committee on Appropriations, the most powerful committee in the House of Delegates, of which Delegate Tyler is a sitting member. The bill came up in the Appropriations Committee twice, then on the floor in three separate votes. All five votes by Delegate Tyler were in the affirmative to removed qualified immunity from law enforcement officers.

Cole, however, has not flip-flopped on the issue, and continues to fervently support ending qualified immunity. The Stafford area minister voted on multiple occasions to end the practice of qualified immunity and is endorsed by anti-police groups such as NARAL. Cole is currently locked in a tight battle with Republican challenger Tara Durant for the Fredericksburg area House seat once held by Speaker Bill Howell.

Durant told The Virginia Star, “There is no question on [Delegate Cole’s] record, this is something he has worked on. We have to protect law enforcement in order to retain officers.”

The challenger added, “I will protect law enforcement and support qualified immunity.”

Although Herring has championed ending qualified immunity, the incumbent Democrat was attacked for his lack of vocal support to end qualified immunity in the primary campaign season. Herring said at the time he supported ending the legislation, but his primary opponent Delegate Jay Jones (D-Norfolk) said he was “quiet as a church mouse” on the issue as it came up during his time in the Virginia Senate.

Early Voting across Virginia begins on September 17th and Election Day will be held on November 2nd.

Matt Colt Hall is a reporter for The Virginia Star and The Star News Network. Follow Matt on Twitter at @MattColtHall on Twitter. Send tips to mattcolthallreports@gmail.com.