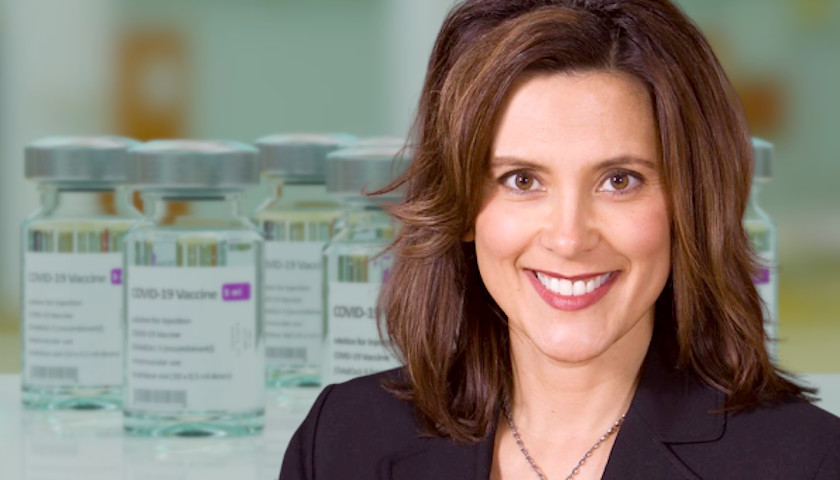 Whitmer was asked about the federal mandate for federal government employees and employers with 100 or more workers, and the Democrat incumbent did not indicate any concern. In fact, she said she would follow Biden’s lead.

“We’re still waiting for the Department of Labor on the federal level to promulgate the rules, and then we will have to do the same at the state level, but we’re waiting on the feds because that’s who made the rule change. We get to see how it’s going to be applied and then we’ve got to work with all of our stakeholders here in Michigan to make sure that it’s very clear so people can get into compliance,” Whitmer told Fox 17.

Whitmer’s comments seem to be an escalation from previous remarks when she refused to say if she would agree to Biden’s demand to impose a statewide coronavirus vaccine mandate.

Now, she’s finding it “concerning” that the locals are making decisions other than what she desires, and blamed critics for local authorities changing policies.

“Well it is concerning to me, because of course, that is in reaction to some of the ugliness that has been sent to our local public health departments ways. It’s unfortunate that that is becoming more and more common in today’s society. I know, I’ve had an incredible amount of ugliness sent my way,” Whitmer said.

Whitmer, who has faced a sharp decline in polling numbers, has praised the efforts of officials to require mask mandates in schools.

“I am grateful for leaders like Dr. (Adam) London here in Kent County who has said, no, we’re not reversing course, we’re going to protect people. And the best way to do it is to ensure that our children are wearing masks when they’re in school. So I applaud the efforts of those leaders who have continued that policy, I understand the difficulty that others are navigating, but at the end of the day, this virus doesn’t care what part of the state you live in. It doesn’t care what side of the aisle you sit on. This virus is a real threat to our economy, and most importantly, to our health,” the governor told the news station.

Critics of the governor argue that her statement is yet another example of Whitmer expanding the role of government.

Eric Ventimiglia, executive director of Michigan Rising Action, responded, “Whitmer and Biden have the flawed belief that the government should be making personal healthcare decisions for the residents of Michigan. Since the very beginning of this pandemic, Gretchen Whitmer has attacked the individual liberties of Michiganders. Whether it is her unilateral lockdowns or now the prospect of a vaccine mandate, the Governor has repeatedly trampled on the rights of hardworking families in our state.”