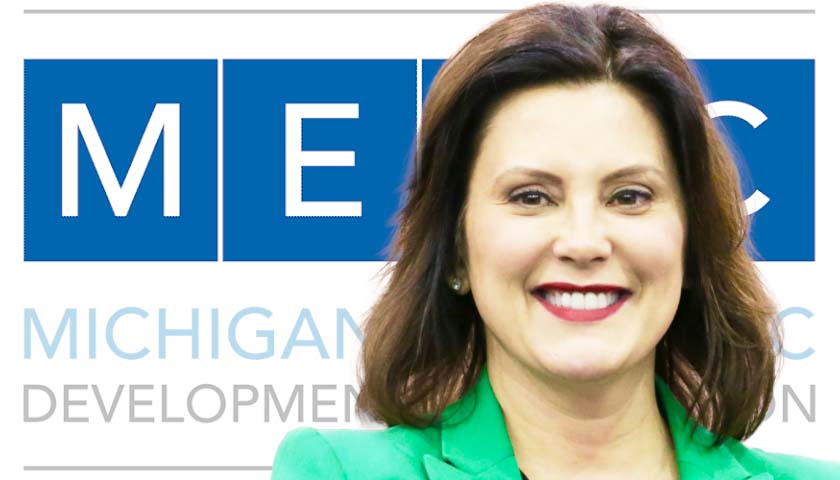 Citing Ford Motor Company choosing Kentucky and Tennessee to build electric vehicle battery plants instead of its home state, Whitmer called on legislative leaders to give the MEDC “more resources and more advanced procedural and legal tools” to pursue projects.

Whitmer said doing this will keep Michigan competitive in the future of mobility, biotech and financial tech. She says the MEDC pipeline has 22,500 jobs that could come to Michigan if the MEDC got more funding. For context, Michigan has a workforce of 4.7 million people.

However, John Mozena, president of the Center for Economic Accountability, a nonprofit organization for transparent economic development policy, pointed to another reason Whitmer wants to hand out taxpayer money; namely, to boost her re-election chances.

Mozena noted a study published in the Journal of Economic Perspectives, which concludes: “In the raw data, per capita incentive spending increases by more than 20 percent in half of the cases in which it is an election year and the governor is up for reelection versus one-fifth of the cases otherwise. This result is consistent with Jensen and Malesky (2018), who find that offering incentives increases the reelection odds of governors.”

Mozena said states that give out the most in subsidies tend to be the states with the highest corporate tax rates because they have to attract big, politically valuable companies with lower taxes.

“The answer is not throwing subsidies at individual businesses,” Mozena said in a phone interview. “The answer is that making it better for everyone to do business here, whether it’s the big manufacturing companies or whether it’s one of the 12,000 people who started up a business in Michigan in February of 2021.”

In the letter to legislative leaders, Whitmer cited MEDC CEO Quentin Messer, who stated: “[W]e need to move all mountains so businesses see Michigan as the only logical option for investment.”

Mozena responded: “The new MEDC CEO says he wants to move mountains? Then how about moving Michigan’s mountains of paperwork, taxes and regulatory hassles out of the way of new entrepreneurs and small business owners who are a far more important source of economic growth and prosperity?”

Senate Majority Leader Mike Shirkey, R-Clarklake, disagreed with giving the MEDC more taxpayer money to hand out to individual companies while Whitmer is still trying to shut down Line 5, which provides many high-wage jobs to the Midwest.

“I have had this conversation with the governor before,” Shirkey said in a statement. “All economic development and infrastructure conversations ring noticeably hollow as long as it is the Governor’s intention to shut down Line 5.”

Scott McClallen is a staff writer covering Michigan and Minnesota for The Center Square. A graduate of Hillsdale College, his work has appeared on Forbes.com and FEE.org. Previously, he worked as a financial analyst at Pepsi.
Photo “Gretchen Whitmer” by Cjh452000. CC BY-SA 4.0. Background Photo “MEDC” by Michigan Economic Development Corporation.