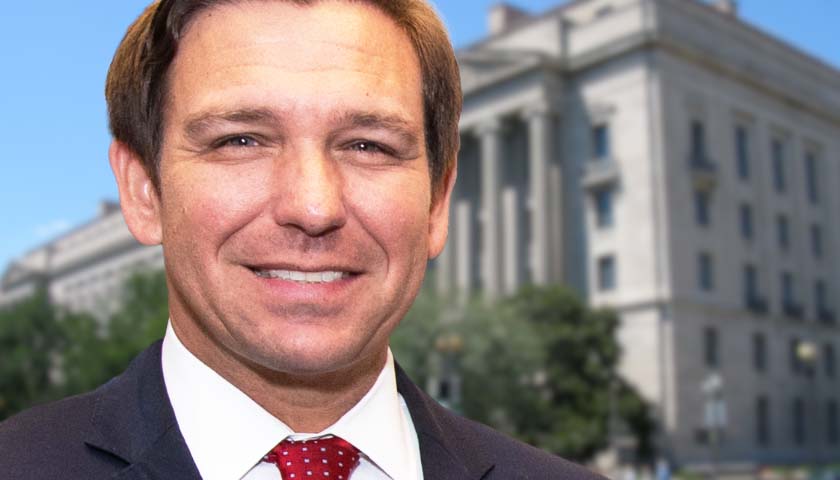 “Attorney General Garland is weaponizing the DOJ by using the FBI to pursue concerned parents and silence them through intimidation,” DeSantis tweeted earlier this week. “Florida will defend the free speech rights of its citizens and will not allow federal agents to squelch dissent.”

Attorney General Garland is weaponizing the DOJ by using the FBI to pursue concerned parents and silence them through intimidation.

Florida will defend the free speech rights of its citizens and will not allow federal agents to squelch dissent.

The directive from Garland to the DOJ came after the National School Boards Association (NSBA) urged the federal government to look into a supposed rise in threats against teachers and school board members. The letter said teachers are under “immediate threat” from parents who have voiced their opposition to implementing Critical Race Theory (CRT) and mask mandates in public schools.

“The NSBA also said these alleged acts from parents should be treated like ‘domestic terrorism.’ As these acts of malice, violence, and threats against public school officials have increased, the classification of these heinous actions could be the equivalent to a form of domestic terrorism and hate crimes. As such, NSBA requests a joint expedited review by the U.S. Departments of Justice, Education, and Homeland Security, along with the appropriate training, coordination, investigations, and enforcement mechanisms from the FBI, including any technical assistance necessary from, and state and local coordination with, its National Security Branch and Counterterrorism Division, as well as any other federal agency with relevant jurisdictional authority and oversight.”

The DOJ responded by announcing they will, in fact, follow the NSBA’s recommendations and launch investigations against the parents.

“The Department takes these incidents seriously and is committed to using its authority and resources to discourage these threats, identify them when they occur, and prosecute them when appropriate,” the letter said. “In the coming days, the Department will announce a series of measures designed to address the rise in criminal conduct directed toward school personnel.”

The letter follows the National School Board Association's request to classify protests as "domestic terrorism." pic.twitter.com/NhPU03YOYq

DeSantis continued by saying the NSBA and the DOJ are forgetting that left-wing activists who support CRT and mask mandates have also been disrupting school board meetings.

“The letter ignores the fact that liberal activists who support CRT and forced masking have been disrupting school board meetings, harassing elected officials they disagree with, and threatening conservative school board members,” DeSantis said.

Grant Holcomb is a reporter at the Florida Capital Star and The Star News Network. Follow Grant on Twitter and direct message tips.
Photo “Ron DeSantis” by U.S. Secretary of Defense. CC BY 2.0. Background Photo “Department of Justice” by Coolcaesar. CC BY-SA 3.0.