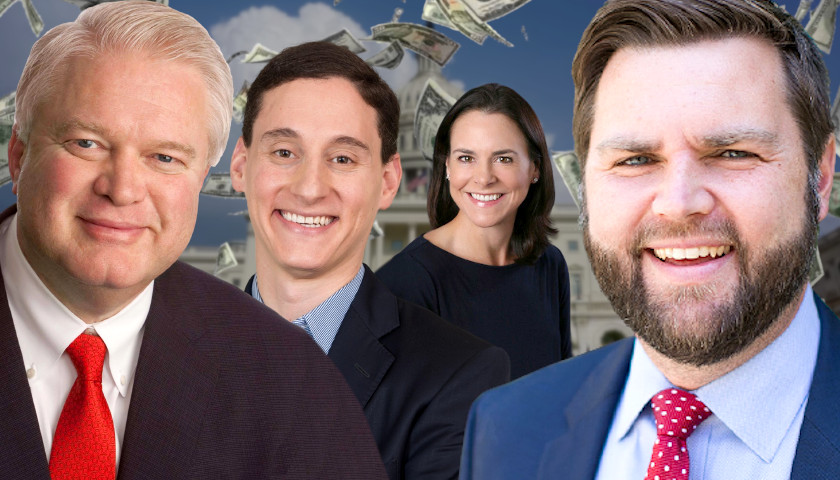 COLUMBUS, Ohio – Republican candidates running for the party’s nomination for the U.S. Senate race in 2022 have formed a solid wall of opposition to the $3.5 trillion reconciliation bill stuck in congressional negotiations this last week.

But Ohio State Senator Matt Dolan (R-Chagrin Falls) breaks with the pack with his support of the $1.2 trillion Infrastructure Investment and Jobs Act backed by U.S.  Senator Rob Portman (R-OH) who has led negotiations on what is billed as a bipartisan effort to fix crumbling roads and bridges across the U.S.

U.S. House Speaker Nancy Pelosi late Thursday evening delayed consideration of the infrastructure bill after political progressives in her Democrat caucus refused to vote for the legislation that would add $550 billion to baseline federal in spending over several years before the passage of the much larger, far-reaching budget reconciliation bill that seeks to fund paid family leave, universal pre-kindergarten, further expansion of Medicare, and measures to advance various progressive social policies and climate change.

President Joe Bident went to Capitol Hill on Friday in a bid to break the logjam.

“Now is not the time for bipartisanship in D.C.,” Mandel’s campaign told The Star. “Now is the time for fighting the woke liberal agenda.”

He called the bills “a wasteful wish list of the radical left’s policies.”

“We are already seeing inflation climb at the highest rate in 30 years,” the campaign wrote, “and increasing spending and taxes will devastate our economy and crush hard-working Americans.”

The campaigns of venture capitalist J.D. Vance and former Ohio Republican Party chairwoman Jane Timken also cited the damage the massive spending will do to the economy beyond what has already been done by the excessive spending in a COVID-19 relief package Biden and Democrats in the U.S. House and U.S. Senate passed earlier this year.

“Historic inflation is making Americans pinch pennies, yet Democrats want to spend another $6 trillion (sic) is bloated, cradle-to-grave government dependency that would fundamentally transform our country to a woke welfare state,” the Timken campaign wrote in a statement sent to The Star.

“The fact that many key Democrats are balking (at supporting reconciliation bill) speaks volumes that it should be nowhere near the American people.”

“The Biden-Ryan plan to spend trillions more on woke pet projects will do nothing but pour even more gasoline on the inflation crisis their radical policies have created,” Vance said in the statement. “Anyone who cares about protecting the middle-class and getting our fiscal house in order must oppose these multi-trillion dollar special interest boondoggles.”

Grassroots conservative and suburban Columbus businessman Mark Pukita called the broader spending and policy package “some of the most disgusting and despicable legislation ever proposed.”
Democrats are OK selling the future of younger Ohioans and Americans to the evil of monstrous, unsustainable, debt,” Pukita texted to The Star. “This is an attempt by Democrats to terminally damage our country.”

The U.S. Senate campaign of Cleveland businessman Mike Gibbons urged Republicans in the U.S. House and U.S. Senate to block what he called “abhorrent” spending in both bills.

“Washington Democrats are attempting to ram through excessive spending on their far-left wish list,” Gibbons said. “The insanity needs to stop.”

Dolan, a three-term state senator, differentiated his position on the spending fracas with his solid support for the infrastructure bill championed by Portman but his “unequivocal” opposition to the expansive House budget package.

“The so-called fighters and disruptors in this (U.S. Senate) race are fighting against Ohio jobs and disrupting commonsense efforts to modernize Ohio roads, bridges, ports and rural broadband with respect to the targeted infrastructure bill negotiated by Rob Portman,” the Dolan campaign wrote.

“If their focus was on Ohio and listening to Ohioans, they would know that infrastructure is a huge component of Ohio’s economy and maximizing American competitiveness with China,” Dolan added, noting that standalone bill would unleash $12 billion in federal support for projects in Ohio without the need to raise taxes.

However, Dolan said he would not support the bipartisan infrastructure bill if it took a deal tying that legislation with the passage of the reconciliation bill or raising the federal debt limit.

“Should the targeted infrastructure bill negotiated by Senator Portman be combined with the Democrats’ misguided and reckless $3.5 trillion proposal or an attempt to raise the debt ceiling,” the statement continued, “I would strongly oppose the package.”

Portman and four other U.S. Senate Republicans expressed hope Friday for passage of the infrastructure bill without it getting tied to the budget reconciliation bill.

“This bill is critically important to modernizing and upgrading everything from our roads and bridges to broadband and increasing the resiliency of the nation’s electric grid,” said Portman and GOP Sens. Mitt Romney (R-UT), Susan Collins (R-ME), Bill Cassidy (R-LA), and Lisa Murkowski (R-AK) in a statement. “It will strengthen our country and have a positive impact on the lives of every single American.”