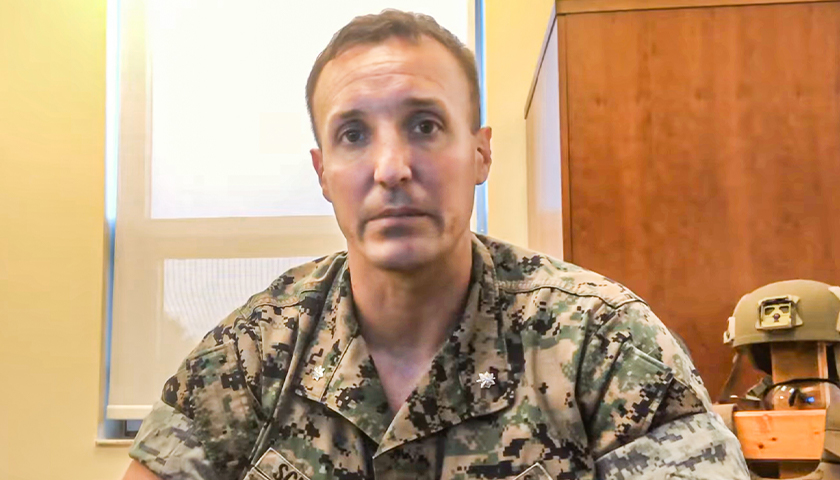 The Marine officer who received viral attention in August for posting a video on social media blasting military leadership over the botched withdrawal from Afghanistan, has been thrown in the brig, the United States Marine Corps has confirmed.

BREAKING: LTC. Scheller, the Marine commander who went viral for speaking out against what was happening in Afghanistan, was incarcerated and sent to the brig today. He went from being a Battalion Commander to a prisoner for demanding ACCOUNTABILITY and INTEGRITY for Afghanistan pic.twitter.com/wwQU1OSXEw

Lt. Col Stuart Scheller was taken to a military brig on Monday for violating a gag order, his father told the military blog Task & Purpose.

“All our son did is ask the questions that everybody was asking themselves, but they were too scared to speak out loud,” said Stuart Scheller Sr. “He was asking for accountability. In fact, I think he even asked for an apology that we made mistakes, but they couldn’t do that, which is mind-blowing.”

The elder Scheller said that his son is scheduled to appear before a military hearing on Thursday.

“They had a gag order on him and asked him not to speak,” the senior Scheller said. “He did, and they incarcerated him. They don’t know what to do with him.”

The Marine Corps issued a statement confirming that Scheller, a former battalion commander, has been sent to the brig.

“Lt. Col. Stuart Scheller Jr. is currently in pre-trial confinement in the Regional Brig for Marine Corps Installations East aboard Marine Corps Base Camp Lejeune pending an Article 32 preliminary hearing,” said Capt. Sam Stephenson, a spokesman for Training and Education Command. “The time, date, and location of the proceedings have not been determined. Lt. Col. Scheller will be afforded all due process.”

According to Task & Purpose, Scheller is accused of four offenses under the Uniform Code of Military Justice.

However, it’s not yet certain whether Scheller will face a court-martial. The Marine will go through an Article 32 hearing, which will determine whether there is enough evidence to warrant a court-martial. But no matter what the hearing finds, Scheller has already made a name for himself through his viral videos. Publicly criticizing senior leadership while still in uniform the way Scheller did was a move so bold that even members of other branches of the military are talking about it.

“People are lying if they said they didn’t feel a little bit like he did the day he posted the video,” said a commenter on the Air Force subreddit in reaction to the news on Monday that Scheller had been sent to the brig and is expected to appear before a military hearing on Thursday.

“[B]ut most of us have the better judgement than to post something like that (especially in uniform),” the commenter added.

Another commenter on the unofficial Marine Corps subreddit echoed that sentiment, writing “You don’t out-dick the Marine Corps. The green weenie always wins. This is no surprise.”

In his viral video—posted on the same day that 13 U.S. service members were killed in an ISIS bombing attack at the Kabul airport in Afghanistan—Lt. Col. Scheller expressed extreme frustration with the way the military withdrawal from Afghanistan had been handled, and demanded accountability.

“People are upset because their senior leaders let them down and none of them are raising their hands and accepting accountability and saying ‘we messed this up,’” he said.

“Did anyone raise their hand and say, ‘we completely messed this up?’” Scheller asked, going on to note that his Marine friends have been wondering if all of the lives lost over the past 20 years had been in vain.

“What I will say is, potentially all of those people did die in vain if we don’t have senior leaders to own up, raise their hand and say, ‘we did not do this well in the end,’” he said. “Without that, we just keep repeating the same mistakes—this amalgamation of the economic/corporate/political/ higher military rank not holding up their end of the bargain,” he added.

Scheller concluded: “I want to say this very strongly. I have been fighting for 17 years. I’m willing to throw it all away to say to my senior leaders, I demand accountability.”

Retired U.S. Navy SEAL Eddie Gallagher, who has been providing fundraising support for Scheller through his Pipe Hitter Foundation, posted an update in Scheller’s case in a Facebook post on Monday.

In his post, Gallagher shared a message from Scheller’s parents, Stu Scheller and Cathy Scheller, which began: “It is with a heavy heart that we, his parents, are informing you that our son, Lt. Col Stuart Scheller, has been incarcerated by the USMC this morning, September 27, 2021. He was issued a Gag order which he broke this weekend by posting on social media.”

In a post on Tuesday,  Gallagher noted that Sec. of Defense Lloyd Austin, Chairman of the Joint Chiefs of Staff Mark Milley and General Kenneth McKenzie would be testifying before the Senate Armed Services Committee.

“Will they be held accountable for the debacle in Afghanistan?” he asked, sharing a tweet about the hearing by former New York City police commissioner Bernard Kerik.  “Losing a 20 year war with no pull out plan that led to the death of 13 young Service Members?”

Scheller wrote a number of long posts on his Facebook page over the weekend, including one on September 25th in which he criticized Presidents Donald Trump, Barack Obama, George W. Bush and Bill Clinton, as well as Generals James Mattis, David Petraeus, Michael Flynn, Julian Alford and Francis Donovan. Scheller also called out Task & Purpose, the military blog that broke this story.

“You don’t understand me,” he wrote. “I do plan to bring the whole system down. Yes, Task and Purpose, I am brave enough to say it again. What say you now?”

Scheller ended his September 25th post by daring his commander to arrest him. “What happens when all you do is speak truth and no one wants to hear it. But they can probably stop listening because… I’m crazy… right? Col Emmel please have the MPs waiting for me at 0800 on Monday. I’m ready for jail.”

In a subsequent video, Scheller upped the ante, declaring that he would bring charges against Marine Gen. Kenneth McKenzie, the commander of U.S. Central Command (CENTCOM), for dereliction of duty.

“To recap my position, in the fallout of Afghanistan I demanded accountability in my senior leaders and I stated then that I understood that I might lose my battalion commander seat, my retirement and my family’s stability,” Scheller said. “As it has played out, I have in-fact lost all three of those things.”

Scheller indicated that rather than pursuing a court-martial over his critical remarks, the Marines had offered him a non-judicial punishment and separation under honorable conditions, so long as he is willing to give up his commission and not fight for his retirement.

“The reason I can’t let it go and the reason I’m not just taking an offer is because I feel like there are general officers in our institution who aren’t being held accountable,” Scheller said.

Addressing McKenzie, Scheller said, “You made comments that are public record on August 31st, that stated you made bad assumptions, that you left hundreds of Americans in Afghanistan, and then you itemized pieces of equipment that total hundreds of millions of dollars.”

“I know you are a great American,” Scheller continued. “I know you didn’t intend to fail. I know you have served very honorably and are probably a great leader. That doesn’t absolve you from the accountability of your bad assumptions.”

“I have read the entire UCMJ [Uniform Code of Military Justice] in the last two weeks of my purgatory, all of the punitive articles,” Scheller said. “And it turns out that all military officers are subject to the UCMJ,” Scheller said in the video. “Because it appears to me that no general officers are willing to hold each other accountable, I am submitting charges against Gen. McKenzie for his bad assumptions – not because I’m vindictive, but because the senior leaders need to be held accountable to the same standard as us.”