Commentary: A China Story Bob Woodward Chose Not to Tell 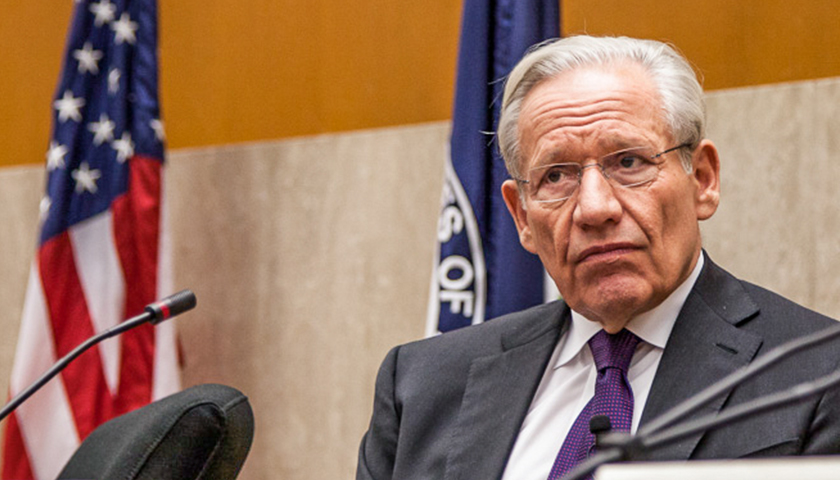 In a just world, if the reporting of Bob Woodward and Robert Costa in their new book Peril is accurate, Chairman of the Joint Chiefs of Staff Gen. Mark A. Milley would be sharpening his ceremonial sword and planning seppuku. Woodward and Costa have reported that Milley circumvented the chain of command and made unauthorized calls to CCP Gen. Li Zuocheng.

If Woodward and Costa got the story wrong, however, they should be the ones sharpening their swords. Although more reliable than most in Big Media, Woodward has reported many stories of questionable accuracy over the years. There was the dubious “potted plant” signal for the equally dubious “Deep Throat,” the imaginative deathbed confession of CIA Director William Casey, and the misinterpreted “slam dunk” quote by former CIA Director George Tenet among others.

More troubling than what Woodward may have misreported is what he did not report at all. Like so many of his colleagues, he has repeatedly betrayed the American public by ignoring stories of major consequence. As it happens, his single greatest oversight involves China, specifically its role in the 1996 presidential election.

Woodward was not lacking opportunity. He wrote a book about the 1996 election, The Choice, and had better access to key players than any reporter in Washington. Yet somehow he failed to mention that Chinese interests bought and paid for President Bill Clinton’s victory over Bob Dole. To miss the most striking feature of a campaign he covered in depth suggests not incompetence on Woodward’s part, but complicity.

There was a lot to miss. In the way of background, the Democrats got drubbed in the 1994 mid-terms and blamed Clinton for the losses. The media were as dismayed as the Democrats. Historians tracing the date of their shift from a tolerable bias to an intolerable corruption should look to this election and the two years that followed. Few reporters wanted to give the scary new House Speaker Newt Gingrich a Republican president, and many did what they had to do to prevent it. Woodward was among them.

With an approval rating at a dangerously low 45 percent, Clinton was looking at a one-term presidency. If he were to have any chance in 1996, he would have to raise money, lots of it. With the financially strapped DNC hesitant to pony up, he and Hillary promptly headed to the one place that welcomed his business, the Riady crime family HQ in Indonesia.

The ethnically Chinese Riadys, Mochtar and son James, had started investing in Clinton while he was still governor of Arkansas. More than once they bailed him out during the 1992 campaign and not just for the sport of it. In 1994, Clinton paid his Chinese loan sharks some of their vig by getting their “man in America,” John Huang, a job in the Commerce Department. In May of that same year, Clinton paid more of it by “delinking” human rights from the renewal of China’s most favored nation status.

The delinking shocked the vestigial liberals in the Democratic Party as well as Chinese dissidents at home and abroad.

They made the mistake of believing Clinton when in 1992 he blasted the Bush White House for “extending most favored nation trade status to China before it achieved documented progress on human rights.”

In December 1994, having secured the support of the Riadys and their allies in the Peoples Republic of China (PRC), Clinton reached out to veteran strategist Dick Morris. In his 1997 book Behind the Oval Office, the amoral Morris boasted of what Senator Fred Thompson would call “the most corrupt political campaign in modern history.” The 1998 Thompson Committee report summarized the Clinton-Morris strategy:

A shrewd observer of all things media, Morris designed a strategy that would allow journalists like Woodward an excuse to not know what was going on. From early July 1995 straight through to Election Day, he “bombarded” the public with TV commercials.

Given that this strategy flouted any number of FEC regulations, Morris  chose not to run any ads where the national media might see them, New York City and Washington most notably. “If these cities remained dark,” wrote Morris, “the national press would not make an issue out of our ads — of this we felt sure.” Morris was proved right.

The ads were problematic enough. Their funding was even more so. The Thompson Committee revealed where the money came from:

The president and his aides demeaned the offices of the president and vice president, took advantage of minority groups, pulled down all the barriers that would normally be in place to keep out illegal contributions, pressured policy makers, and left themselves open to strong suspicion that they were selling not only access to high-ranking officials, but policy as well. Millions of dollars were raised in illegal contributions, much of it from foreign sources.

The fact that Milley was calling Li Zuocheng as an equal is directly traceable to Clinton’s indebtedness to Chinese interests and their American allies. Volumes could be written about the corruption of the 1996 campaign, but one example should convince the reader of is consequences.

The story begins in February 1996 when a Chinese Long March 3B rocket crashed just after liftoff. This was the third such failure in three years involving U.S.-built satellite payloads, in this case a Loral-built Intelsat 708. Happily for Loral, however, its CEO Bernie Schwartz had a friend in the White House. In the 1996 campaign, no individual donor gave more soft money to the DNC than Schwartz.

In March 1996, Clinton overruled his own State Department and awarded authority over satellite-export licensing to the notoriously corrupt Commerce Department, temporary home of one John Huang. In April 1996, Commerce and the Clinton White House turned a blind eye when a Loral-led review team helped the Chinese military make necessary refinements in the Long March rocket.

The House Cox Committee would later describe Loral’s actions as “an unlicensed defense service for the PRC that resulted in the improvement of the reliability of the PRC’s military rockets and ballistic missiles.” The $2 million Loral and Schwartz donated to the Clinton cause made this friendly service possible.

“No one in the media really caught on,” claimed Woodward in the afterword of the paperback edition of The Choice. He admitted he “vastly underestimated the significance of money” in the campaign and conceded that the ads Morris devised “were deceptive enough to be appalling.” But this mea culpa came too late. The damage had been down.

For the next twenty-five years, Woodward managed to vastly underestimate the significance of one story after another. In the Obama years alone, Woodward, the paragon of American journalism, missed Fast and Furious, the IRS suppression of the Tea Party, the Pigford scandal, Benghazi, the Obamacare fiasco, and, incredibly, the Russia collusion hoax.

Although less of an ideologue than many of his peers, none has had the opportunity to set the historical record straight that Woodward has had. Unfortunately for America, he blew one opportunity after another. It almost doesn’t matter whether he quoted Gen. Milley accurately. That clowns like the general are running this country is a testament to Woodward’s half-century of willful blindness.

An independent writer and producer, Jack Cashill has written a dozen books under his own name and collaborated on a dozen more. He has a Ph.D. from Purdue University in American studies. He is a contributor to American Spectator. Jack Cashill’s latest book, Barack Obama’s Promised Land: Deplorables Need Not Apply, is now widely available. See www.cashill.com for more information.