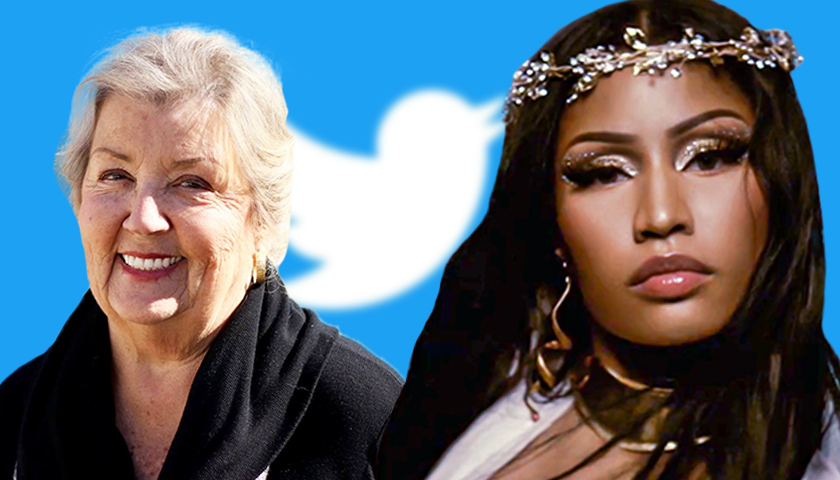 Two famous individuals from opposite sides of the political divide— Nicki Minaj and Juanita Broaddrick—were suspended from Twitter in the past 24 hours for voicing their concerns about the experimental COVID vaccines, or as Twitter put it, spreading “vaccine disinformation.”

Minaj addressed her 157,000,000 followers on Instagram Live on Wednesday, warning in a powerful speech that the COVID Cancel Culture is turning America into a country like China.

It all started for the rap queen on Monday when she informed her 22 million Twitter followers that her cousin’s friend in Trinidad had experienced some uncomfortable adverse effects after getting vaccinated. Minaj urged her followers “pray on it” and not be “bullied” into their decision whether or not to get vaccinated.

My cousin in Trinidad won’t get the vaccine cuz his friend got it & became impotent. His testicles became swollen. His friend was weeks away from getting married, now the girl called off the wedding. So just pray on it & make sure you’re comfortable with ur decision, not bullied

The tweet prompted a firestorm of disapproval from vaccine hardliners, including MSNBC’s Joy Reid and NIAID Director Dr. Anthony Fauci. For a couple of days, Minaj seemed to enjoy sparring with her detractors on Twitter.

The two white men sittin there nodding their heads cuz this uncle tomiana doing the work chile. How sad. https://t.co/4UviONyTHy

I guess I can join in the reindeer games too right? Ppl can go on tv & lie on me, I can report on them, too right? ☺️. Doesn’t have to be truths. It can be half truths.

Uncle Tomiana asked who on earth would trust the US FDA guys…@JoyAnnReid pic.twitter.com/tt93FM85uc

Sir I’ve never met you. I know… we all look alike. “Rudest little madam”. I like it. Has a special ring to it. Thanks Pierce. Love the accent. I’d love to come chat. Scones. Tea. Clown nose & big red shoes for you. Lmk babe 😘😍 https://t.co/9Evnhnuj9l

One of her tweets on Wednesday may have influenced Twitter’s decision to lock her out of her account. Minaj tweeted out a video of Fox News’ Tucker Carlson defending her on his show, adding  a bullseye symbol to indicate that she agreed with him.

In another Tweet, Minaj announced that she had been invited to the White House, and that she would be going  dressed in pink like Reese Witherspoon in “Legally Blond.”

The White House has invited me & I think it’s a step in the right direction. Yes, I’m going. I’ll be dressed in all pink like Legally Blonde so they know I mean business. I’ll ask questions on behalf of the ppl who have been made fun of for simply being human. #BallGate day 3 https://t.co/PSa3WcEjH3

“I’ll never go back on Twitter because now it’s starting to feel a little scary,” she continued. “I remember when I was when I was a little girl and I would be taken to church and sometimes the people in charge would tell us ‘be happy that you’re able to praise God freely because some people in so many countries in the world can’t praise the God they’d like to praise freely they have to hide the Bibles if they if they are a Christian in some countries,’ right. And that always motivated me to want to be in charge and enjoy charge because I was like wow, some people don’t get this luxury,” she said.

And what’s happening is that we used to talk about, 50 years ago and 30 years ago and 20 years ago, we have become that place that we don’t—that you can’t speak. You can’t speak the fear of the mob attacking you! if that doesn’t give you chills up and down your f—cking spine!”

This is scary! You should be able to ask questions about anything you’re putting inside your body. We ask a bunch of questions about about the most simple thing ‘oh b-tch, how that glue work? Do that glue do that? ‘Cause if I go in the pool and I sweat it off…?’” She said. “But you can’t just innocently ask a question about something going in your body? Do y’all realize that?

I remember going to China and they were telling us you know ‘you cannot speak out against, you know, the people in power there, etc.’ And I remember all of us thinking, ‘okay, well, you know, we understand and we respect the laws here and you know that it’s so different where we live.’

But don’t show see what’s f*cking happening? Don’t you see that we are living now in that time where people will turn their back on you, not only not agree, f*ck not agreeing. But people will isolate you if you simply speak and ask a question. Y’all won’t see what the f*ck is happening?

Twitter also suspended outspoken Biden critic Juanita Broaddrick for seven days after she tweeted something critical about the COVID vaccines. Broaddrick, who has famously alleged that she was raped by Bill Clinton in April 1978 when he was the Attorney General of Arkansas, has over 518,000 followers on Twitter.

On Wednesday, she had tweeted out a link to a post about a study showing that the vaccines will enhance the infectivity of the Delta Variant.

“Nicki Minaj and I both got put in Twitter jail today for talking about Covid and the Vaxx,” the truth-teller wrote on GETTR. “Don’t know how long hers will be…. mine is for 7 days. Never imagined I would one day be living under communism.”