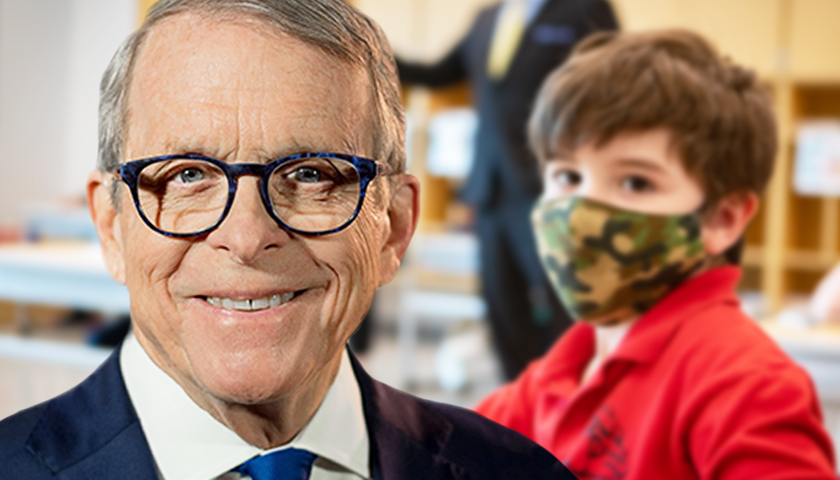 Ohio Gov. Mike DeWine said he wants to impose a new mask mandate but feared a fight with the General Assembly after legislation that limited his authority to enact public health orders became law.

DeWine spoke Tuesday about the growing number of COVID-19 cases throughout the state at the Ohio Children’s Hospital Association. That group, made up of the six children’s hospitals, has spent the past two weeks pleading for vaccines and masks in schools.

“Today, they made a direct appeal to superintendents of the schools and they asked all schools in Ohio, K-8, to require masks for all staff and students during this very dangerous surge of the coronavirus,” DeWine said. “We all share a goal of keeping those kids in school. I think everybody in Ohio agrees we must do everything we can to keep our children in the classroom. If we want our kids to stay in schools. We need students who come to school to wear a mask.”

When the school year began, 46% of the students in Ohio were required to wear masks, DeWine said. Currently, 54.4% of students are under a local district mask mandate. However, at least two school districts in central Ohio – Plain City Local Schools and Centerburg Local Schools – rescinded mandatory masks this week.

“The data is clear there is a higher level of COVID in school districts where masks are not required,” DeWine said.

“We have two paths forward. We can just let everybody get sick, including children. Some of them will get very sick and some of them might die. That’s one path forward,” Manning said. “The other path forward is to use tools that are safe and effective, and these tools minimize people getting sick and minimize children getting sick and allow our children to stay in school. Please do this small, small thing to allow children to wear masks.”

The Ohio Senate and House voted in March to override DeWine’s veto of Senate Bill 22, which limited the governor’s power to impose mandates and new health restrictions.

DeWine said he now has no options to impose health mandates and said he is not inclined to challenge the Legislature in court. Instead, he hopes information from health leaders will convince more school leaders to impose mandates.

“I vetoed the bill that gave the Legislature the power. That veto was overridden. In addition to that, they have made it very clear they will take off any mandate I put on,” DeWine said. “If I could put on a statewide mandate, I would do it. The Legislature has made it very clear if we put on a statewide mandate, they will take it off. They have the ability to do that.”

The new law limits the governor’s ability to create ongoing orders and creates an Ohio Health Oversight Advisory Committee made up of members of House and Senate to review health orders.

The bipartisan committee would have the authority to rescind an executive order issued by the governor or a special standing order or rule issued by the Department of Health for preventing the spread of a contagious disease.

It also allows the General Assembly to rescind health orders by resolution, allows individuals to sue to the state over orders and stops local health departments from closing schools on its own, putting the decision into the hands of school boards.

J.D. Davidson is a veteran journalist with more than 30 years of experience in newspapers in Ohio, Georgia, Alabama and Texas. He has served as a reporter, editor, managing editor and publisher. He is a regional editor for The Center Square.
Background Photo “Child Wearing Mask” by U.S. Department of Education CC BY 2.0.