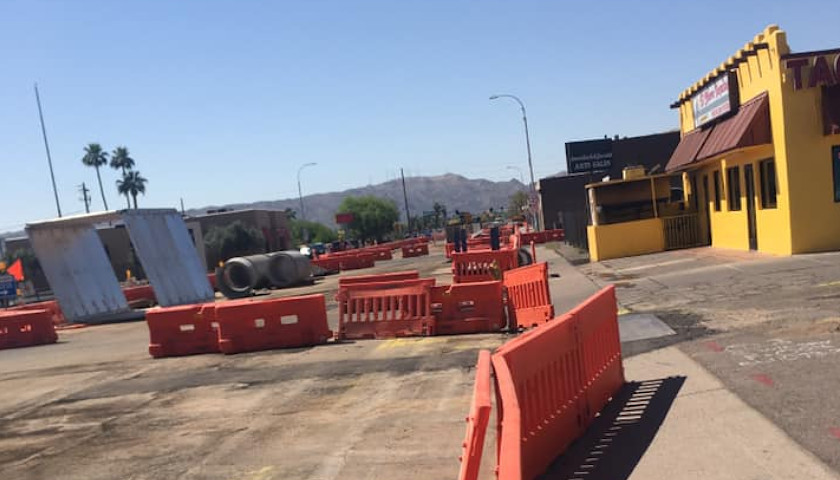 The construction of light rail began in Phoenix in 2005, and was fought by property owners located in the way who thought it was too late to set up mass transit in such a densely populated city. Not very many miles have been built since then, only 28, in one straight shot in an L-shape throughout the valley, with businesses and residences still fighting weak expansion efforts. The South Phoenix expansion won’t be completed until 2024.

Celia Contreras, who owns Tony’s Window Tinting in South Phoenix, says the construction effort in South Phoenix is harassing her business in order to shut it down, tired of her complaints. She says large trucks deliberately block the entrance to her business so customers can’t stop by, and have flooded her building twice. She posted photos of drains stating that the construction company was blocking it with cement, unwise during the monsoon season. Officials refuse to help her, and she caught workers on video making fun of her for having to temporarily close her businesses due to the problems.

Contreras started a Facebook group about the problems facing South Phoenix businesses called Four Lanes or No Train. She and other business owners demanded that the city of Phoenix maintain four lanes for traffic so the business wouldn’t suffer, but the Phoenix City Council stuck with two, citing the difficulty it would cause carving out bus pullouts, bike lanes, and turning lanes.

Dan Vallen, who owns a nursery, says trucks are also blocking his business, so customers can’t get to it. Business owner Julie McLeod VanCamp said she can’t pull into her shop most days with her 40-foot trailers due to the trucks blocking the entrance.

Some of the business owners commenting on the Facebook group pointed out that there is a bus that goes along the exact same north-south route through downtown Phoenix that the light rail will take along Central Avenue. The light rail travels at the same speed as the posted speed limit for cars. Cas Coop warns, “The end result will be a one lane road down Central Ave. for traffic and a light rail with few passengers.”

Contreras believes that vast amounts of corruption was involved in the process of implementing light rail. She says the government has offered businesses like hers small amounts of money to compensate, but it comes with strings, like signing a promise not to sue or in the form of benefits like immigration assistance instead of straight cash for things like rent.

An initiative was launched in 2019 to stop the expansion in South Phoenix, but Contreras believes it failed in part due to portraying the opposition as a partisan effort. She told The Arizona Sun Times, “You cannot make it a Republican effort. The city is more Democratic, South Phoenix is full of Democrats. Make it inclusive. Focus on the corruption.”

Yelp is full of poor reviews about the light rail. One woman who goes by “Alexa R.” who says she rides it five times a week, wrote, “It doesn’t really help congestion, since a huge percentage of the riders are former bus riders. … They cut some very useful bus lines in order to force people to use the light rail instead.”

She also complained about the location, “Why does it start at a ridiculous place in Mesa, then travel on the worst street in Tempe, then down the least traveled street in Phoenix then end at what is basically a dead mall?”

The Census Bureau found that light rail does little to take drivers off roads. Its 2019 American Community Survey reported that only about 3.5 percent of people who commute to work in Phoenix do so by public transit — and an overwhelming number of those use the bus. That same year The Arizona Republic observed, “The percentage hasn’t changed much over recent years. In the case of the South Central line, traffic along the route on Central Avenue would be reduced to a single lane each way, diverting traffic to already busy Seventh Street and Seventh Avenue.” Compounding the problem is the rise of Lyft and Uber, further reducing light rail riders.

A new sales tax approved to pay for more light rail expansion in Phoenix in 2015 was so costly, $17.5 billion, that a saying became popular, “You could easily buy a brand new Toyota Prius for every household in Phoenix” for that amount. Light rail doesn’t pay for itself with fares. In fiscal year 2018, it cost $37 million throughout the Valley, but fares only paid $12 million. The cities picked up the rest of the tab.

Rachel Alexander is a reporter at The Arizona Sun Times and The Star News Network. Follow Rachel on Twitter. Email tips to rachel.r.alexander@gmail.com.
Photo “Lightrail Construction” by Celia Contreras.