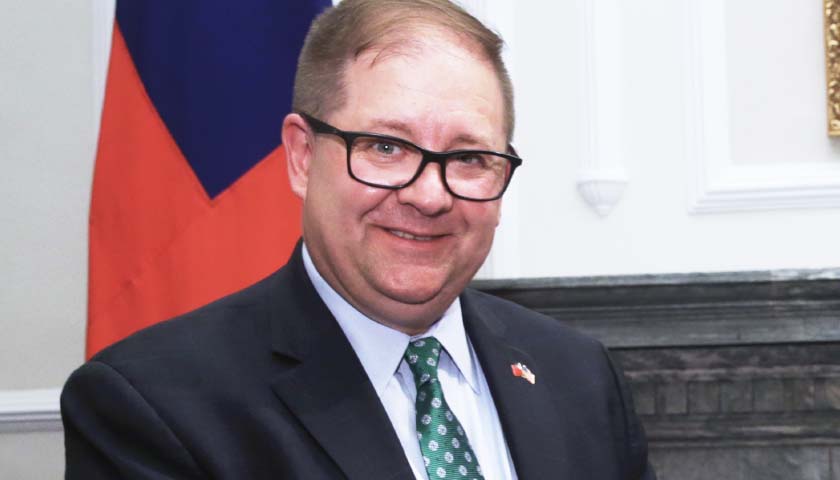 The characterization came during an occasionally raucous Ohio Republican Party State Central Committee meeting where members seeking to reform the management and policies were unable to get financial and management issues discussed.

“These people are not your constituents,” he told members as well as media and grassroots protesters in the gallery. “This is a dark money organization whose funders are hidden, and whose intentions are unknown.”

Jon Morrow, Better Ohio’s policy director, said the group started in March 2020 during the initial onslaught of the COVID-19 epidemic in opposition to Ohio Governor Mike DeWine’s shutting down many retail, restaurants, and other businesses that forced office workers to do their jobs from home.

It also has opposed DeWine’s mandatory mask policy that ended in early summer and more recent efforts at the national level to make COVID-19 vaccinations mandatory.

“We’re a public policy organization of conservatives,” Morrow said. “We’re not clandestine at all.”

The term “dark money” in politics generally refers to organizations set up by monied political interest groups to avoid scrutiny of contributions made to politicians.

Morrow said Better Ohio, a registered as 501 (c)(4) nonprofit with the Internal Revenue Service, has three funders who made modest contributions to start the group.

The organization also does not make contributions, whether to campaigns or to interest groups.

It has promoted a state convention to consider various reforms, including banning candidate endorsements for primary elections.

Morrow said he is not surprised by Paduchik’s attack given the party leadership’s desire to re-elect DeWine even at the cost of bypassing the Ohio GOP’s bylaws and dismissing the authority of the central committee. That has included, he said, approving a $500,000 contribution to the DeWine re-election effort without the approval of the party’s finance review committee.

“Bob Paduchik is not running the Ohio Republican Party professionally,” Morrow said. “He’s running it as a bully, ignoring its bylaws.”
_ _ _

Brian R. Ball is a veteran journalist in Columbus reporting for The Ohio Star and The Star News Network.  Send him news tips at bball@theohiostar.com
Photo “Bob Paduchik” by 總統府. CC BY 2.0.