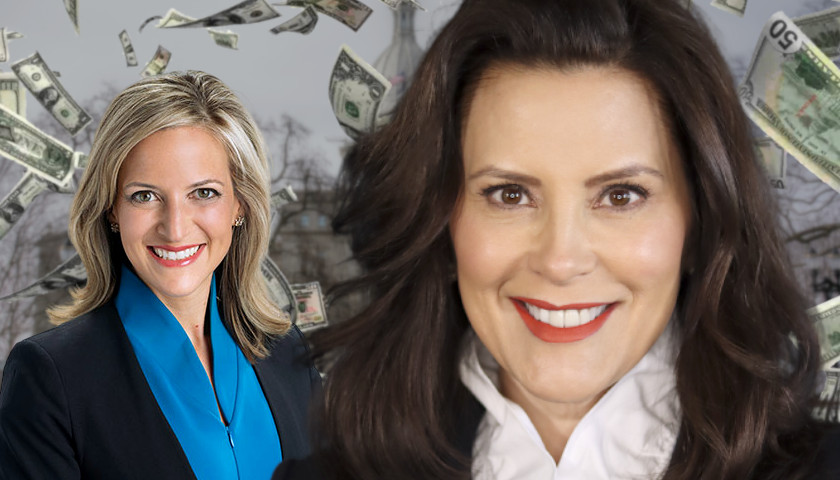 Michigan Secretary of State Jocelyn Benson (D) returned a campaign contribution that violated donation limits, while Gov. Gretchen Whitmer (D) has refused to do the same.

Benson and Whitmer collected contributions in excess of the $7,150 limit by arguing they were facing a recall election, which a previous secretary of state arbitrarily ruled would exempt an elected official from limits if subjected to a recall. But Benson and Whitmer’s recall concerns were never serious, as no organized effort to collect the sufficient amount of signatures — over 1 million — was ever launched.

Nevertheless, the duo seized on the loophole to collect large donations.

“When the Secretary of State returned the money, it was tantamount to an admission that accepting money in the name of failed recall accounts is illegal,” Michigan Rising Action argued in a release.

“Governor Whitmer’s blatant violation of Michigan’s election laws is an all too familiar refrain for Democrats – rules for thee, not for me,” Michigan Rising Action Executive Director Eric Ventimiglia said. “Jocelyn Benson returned the excessive contribution because as the chief elections officer for the state, she knew it was illegal. Whitmer’s refusal to do the same is a flagrant violation of our election laws, and she must be held accountable.”

In August, Whitmer reported raising $8.6 million in campaign cash, a significant portion of it by breaking individual donation limits, triggering a complaint to Benson by the Michigan Freedom Fund.

“Gov. Whitmer is deliberately breaking the law and illegally taking millions of dollars from Hollywood and New York elites because she believes the rules don’t apply to her,” MFF Executive Director Tori Sachs said in a statement. “Secretary of State Jocelyn Benson must compel Whitmer to immediately return the illegal contributions and issue sanctions on Whitmer’s campaign that are aligned with the most egregious illegal scheme in violation of contribution limits in Michigan history.”

The complaint is still pending.

The questionable campaign donation is not the first time Whitmer has received pushback for fundraising efforts. Previously, Whitmer (D) traveled to Colorado for a fundraiser just days after railing against the influence of out-of-state money.

Whitmer complained of the “millions” supposed “out-of-state interests” that would oppose her election, and then she traveled to Aspen, where contribution levels ranged from $250 to $5,800 per person.

“Gretchen Whitmer has an integrity problem, and she makes it worse every time she tells people one thing then turns around and gets caught doing exactly the opposite,” Tori Sachs said at the time.