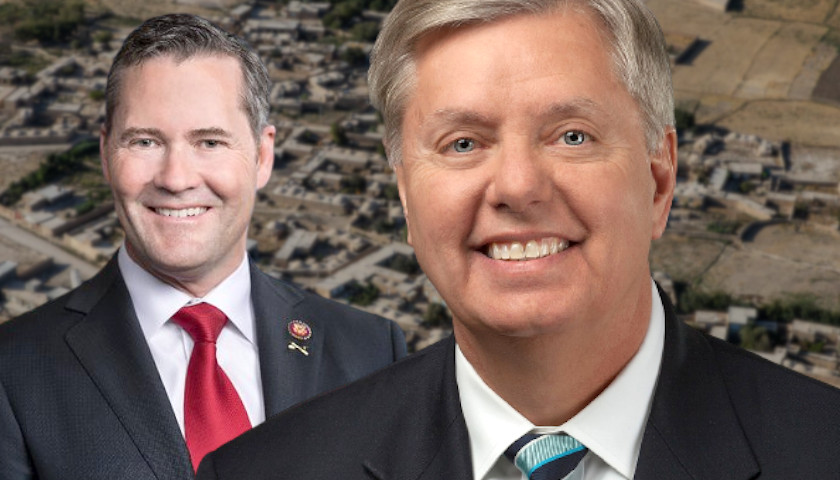 In the wake of the deadly terrorist attack in Kabul that killed 13 American service members and at least 170 Afghans, Rep. Mike Waltz (R- Fla.) and Sen. Lindsey Graham (R-S.C.) have called on Joe Biden to formally recognize former officials in Afghanistan as legitimate government representatives, and to designate the Taliban as a Foreign Terrorist Organization.

The pair released the following statement on Friday after speaking with a number of Afghan government officials, including the former vice-president, who say they have established a safe zone for Americans and our afghan allies left behind in the now Taliban-controlled country.

“After speaking with Afghan Vice President Amrullah Saleh and representatives of Ahmad Massoud, we are calling on the Biden Administration to recognize these leaders as the legitimate government representatives of Afghanistan. We ask the Biden Administration to recognize that the Afghan Constitution is still intact, and the Afghan Taliban takeover is illegal.

“These leaders chose to stay and fight for the freedoms of the Afghan people and oppose extremism. They have established a safe haven in the Panjshir Valley for Americans left behind, our allies, and those seeking freedom from Afghan Taliban rule. They will also be on the front lines in the fight against global Islamic Extremism, which will continue to plot attacks against the West in the wake of our withdrawal from the region.

“We call on President Biden to designate the Afghan Taliban as a Foreign Terrorist Organization, and we urge him to publicly support Congressional efforts to stand with our friends in the Panjshir Valley who will serve as a bulwark against regional terror.”

“Our friends in the the Panjshir Valley chose to stay & fight for an Afghanistan free of terrorists,” Waltz wrote in a tweet. “We must stand with them and Pres. Biden must recognize them as the legitimate Afghan gov and proclaim the Taliban takeover & gov are illegal & illegitimate.”

Former Afghan President Ashraf Ghani fled the country as the Taliban was closing in on Kabul.

The Biden administration has reportedly partnered with the Taliban, providing them with lists of Americans and Afghan allies who are to be granted entry through Taliban checkpoints outside the Hamid Karzai International Airport (HKIA).

“I still can’t fathom the fact the Biden Administration shared such sensitive details of American and Afghan identities with terrorists. This is a betrayal to our own citizens and allies,” said Waltz in a tweet.

The Taliban have requested that the U.S. keep a diplomatic presence in the war-torn country past the August 31 withdrawal of military forces, according to the Washington Post.

Waltz said it was “a slippery slope” for the Biden regime to recognize a terrorist government that took power by force.

On Tuesday, before the deadly attack, Graham declared that Biden’s dereliction of duty on Afghanistan should lead to his impeachment.

“I think he should be impeached,” Graham told Newsmax host Rob Schmitt. “This is the most dishonorable thing a commander in chief has done, maybe, in modern times. Joe Biden, for political reasons, wanted to pull all of our troops out because of the polling numbers, and what has he done?

“He’s created the conditions for another 9/11. He’s abandoned thousands of people who honorably and bravely fought along with us, and how do you win this war over time if you have nobody to help you over there? How do you keep it from our shores if all of us are here.”

On Friday he urged the Biden regime to reestablish a military presence at Bagram Air Force Base to continue to evacuating American citizens and our Afghan allies.

“The biggest mistake in this debacle is abandoning Bagram,” he said in a tweet. “The retaking of Bagram would put our military at risk, but I think those involved in the operation would gladly accept that risk because it would restore our honor as a nation and save lives,” the senator wrote in another tweet.

Evacuation flights resumed at Kabul’s airport on Friday amid warnings from military officials that more attacks could target the airport, CBS News reported.

An Afghan health ministry official told CBS News on Friday morning that the death toll from the bombing attack had reached at least 170, the vast majority of the victims being Afghans. Of the 13 American service members who were killed, 10 were Marines. The U.S. Navy confirmed on Friday that another one of the Americans killed was a Sailor. It was the deadliest day for U.S. forces in Afghanistan in a decade. At least 18 more U.S. troops were injured in the attack.

Pentagon officials clarified Friday that they believe there was only one suicide bomber, not two as had been previously reported.