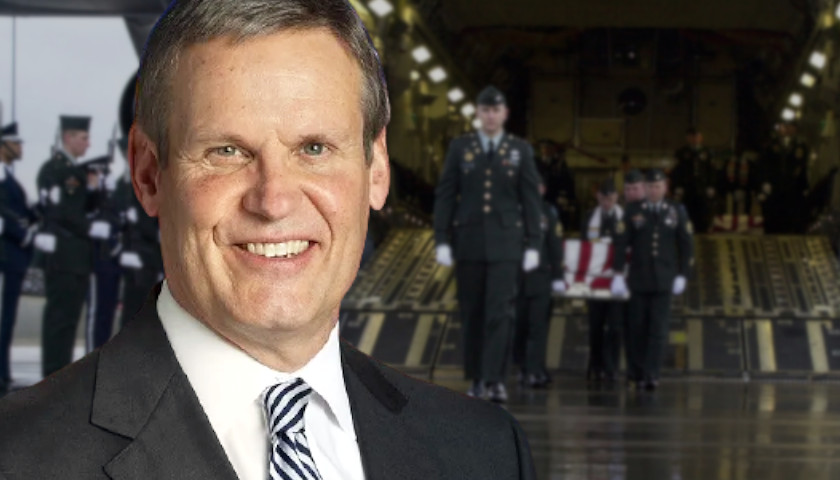 Tennessee Governor Bill Lee commented Saturday evening on the death of Ryan Knauss, an East Tennessean who was one of the 13 American service members killed in a deadly terrorist attack in Kabul, Afghanistan last week.

“Maria and I are heartbroken and mourning the loss of U.S. Army Staff Sergeant Ryan Knauss, a Tennessean who was killed in the tragic terrorist attack on Kabul. On behalf of all Tennesseans, we offer our full support in the difficult days ahead,” Lee tweeted Saturday.

“Ryan was an American hero who answered a higher calling to confront evil and fight for freedom. We are forever indebted to the 13 service members who made the ultimate sacrifice for our country, and we lift their families up in prayer. God is a redeemer, and we ask that his blessing pour over these grieving families and bring them peace and comfort in knowing their loss is not in vain. May God continue to bless the United States of America.”

Lee announced Friday that flags at the state capitol will continue to fly at half-staff in remembrance of all of the U.S. service members killed last week in Afghanistan.

Knauss was the only member of the U.S. Army who died in the terrorist attack, according to a statement released by the Pentagon. One other victim served in the U.S. Navy, while 11 victims were U.S. Marines.

According to the stepmother of Knauss, he enrolled in the military shortly after graduation, finished Psychological Operations training, and had hoped to serve in Washington, D.C.

Knauss was one of thousands of U.S. troops working around the clock to evacuate U.S. citizens and Afghan allies from the territory controlled by the Taliban.

A host of Tennessee lawmakers issued their condolences to the family of the fallen soldier and praised Knauss for his bravery:

“On behalf of all Tennesseans, Chrissy and I extend our deepest sympathies to the family and friends of Ryan Knauss. The Bible teaches us that ‘greater love has no one than this, than to lay down one’s life for one’s friends.’ That’s what Ryan and 12 fellow service members did yesterday. Ryan will be remembered as a brave, honorable, and heroic man—a Tennessee volunteer—who, with a servant’s heart, gave everything of himself at just 23 years old for his state and the country that he loved dearly,” said Senator Bill Hagerty (R-TN) in an emailed statement.

“Ryan embodies American heroism — saving people he had never met before, in the face of persistent evil. We will never forget his sacrifice in service to his country,” continued Senator Marsha Blackburn (R-TN).

“A true embodiment of the Volunteer State, Ryan Knauss paid the ultimate price to help complete strangers escape Kabul. Ryan is the definition of an American hero. May God bless his family and friends,” added Representative Mark Green, (R-TN-7).

According to his family, the 23-year-old had wanted to serve in the Armed Forces ever since he was a child.