Commentary: Who Are the Americans Stuck in Afghanistan? 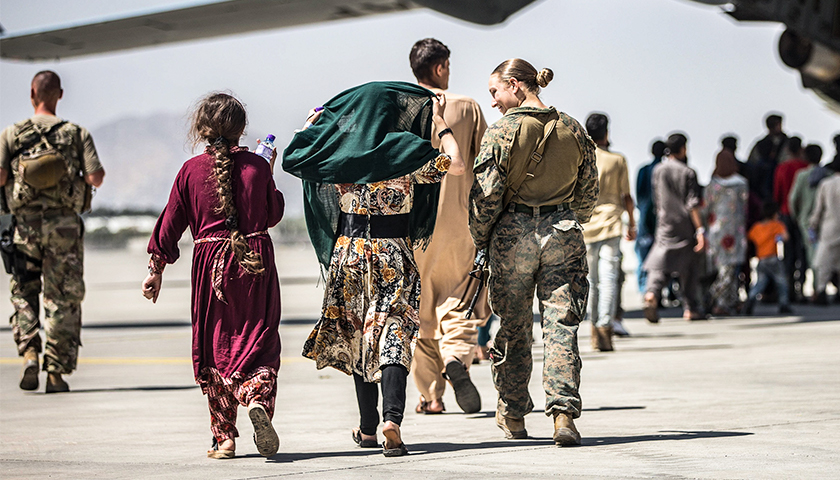 Having met a number of global traveler-types, I was surprised some years ago when I heard American citizenship described in very unromantic, mercantile terms. The most common expression was, “It’s a good passport to have.”

For blood and soil Americans, citizenship is something entirely different. After all, two-thirds of Americans do not even have a passport. Rather, this nation is who we are. It is mom, apple pie, Main Street, the English language, our ancestors, our only political loyalty, and our destiny. Unlike globe-trotting “citizens of the world,” we are not just passing through.

A similarly crass view of citizenship is the root of the “birth tourism” phenomenon. Foreigners, typically Chinese, though sometimes Russians or Brazilians, come here late in their pregnancies for the sole purpose of giving their kid an American passport. Because of birthright citizenship, the young person is automatically considered a citizen upon birth.

After recuperating and acquiring the necessary documentation, the families return to their home countries, new American in tow. Now the child can serve as the “anchor” for his relatives’ chain migration. He can easily travel to or do business in the United States. While he is in every other respect a foreigner, he now has the golden ticket.

While I’m sure most of these American citizens raised overseas are lovely people, this group also includes the likes of Anwar al-Awlaki, an American-born al-Qaeda leader, who returned to Yemen with his parents as a child. Like other American citizen-members of al-Qaeda, he had close connections to relatives overseas and traveled back and forth to the United States throughout his life. His citizenship made reentry significantly easier for him, while endangering the rest of us.

He was ultimately taken out by a drone attack in 2011.

These marginal characters with American passports all come to mind when we hear the plaintive chorus about “Americans” stranded in Afghanistan. Who are these Americans? Why are their families not in the media, pleading and crying to get their husbands and wives and children out of the country? Where are the human interest stories about their many contributions to our homeland?

There are many testimonies by American servicemen about their loyal translators, as well as pleas by Afghans living in the United States about family left behind (citizenship unspecified), but barely a peep from the well-wishers of Americans allegedly in harm’s way. As with many other things in our dishonest age, we often have to figure out the truth by looking for anomalies, in this case, the conspicuous absence of any details about the stranded Americans.

As recently as a week ago, the military said that it had no idea quite how many Americans were still in the country. This is why I am extremely skeptical of the estimate of 15,000 Americans left in Afghanistan. I assume that number is fake. There is no real tracking of Americans exiting the country, after all. We can also reasonably assume the Afghan government’s recordkeeping in this area was as inefficient and corrupt as everything else. We do know that the more rooted Americans among the contractors, embassy personnel, and military are accounted for and either already out or in the process of leaving.

There are nearly 100,000 people of Afghan descent living in America, almost all of whom arrived as refugees after 1979. For the most part, we know nothing about them. They have made almost no impact on our collective life and live in the shadows, legal documents notwithstanding. Some have returned to do business or visit family or because they found it hard to adapt to life in America. Whether they have been living in Afghanistan one, 10, or 20 years after acquiring legal status in America, no one knows.

The Biden Administration has had to twist itself in knots defending its policies on “left behind” Americans, because its leftist worldview makes no distinction between Americans that are native-born and the al-Awlakis of the world, even though these distinctions are necessary and important, particularly when those “paper” Americans voluntarily repatriate themselves to their ancestral homelands.

Travel at Your Own Risk

This leads to a final thought regarding our government’s obligations to citizens overseas. That duty is limited. Deploying the military every time Americans are endangered abroad is a canard to justify America’s continued role as a global policeman and global empire. It renders every dingbat adventure tourist or cosmopolitan global traveler the arbiter of our nation’s obligations overseas.

The obligation to never leave an American behind is for those serving America, including our military and government personnel. It extended to our Libyan Ambassador, whom the Obama Administration left behind, to his fate. It extended to our P.O.W.s in Vietnam, for whom there was credible evidence some were left behind to facilitate the peace process. It does not extend to foreign-born dual citizens or American-born citizens of foreign extraction who have chosen to make a life for themselves in another country.

Afghanistan has been a dangerous country before and after the arrival of our forces in 2001. Our plans to withdraw have been in place since February of last year and have been widely publicized, particularly in Afghanistan. Those left behind were there by choice, deeply embedded in a society to which they felt greater affinity.

Reporting about Americans left behind has been a heavy-handed effort to manipulate the public into supporting further, indefinite involvement in Afghanistan. The prospect of “Americans left behind” conjures up images of our soldiers or diplomats stranded in the Hindu Kush, not the cab driver with whom one can barely communicate returning to live with his uncle.

As anyone who has watched “Locked Up Abroad” knows, when you travel internationally, you are mostly on your own. This is an inherent and unavoidable risk of foreign travel. The Marines were not dispatched for Natalie Holloway, nor when Americans go missing in Latin America, and they won’t be coming for you, either. The duty to protect Americans everywhere is only invoked selectively and cynically by the “forever war” caucus.

The State Department estimates 9 million Americans live abroad. There are likely American citizens with U.S. passports living in every country on earth. Our degree of friendliness to each of these nations varies widely. It is guaranteed every year that at least some of these expatriates will run into trouble, either because of their own foolishness or these foreign nations’ lackluster legal systems. A diverse nation, where many citizens have deep connections overseas and travel frequently to their ancestral homelands, artificially renders the rest of the world and its problems our own.

America is our home. Its government exists to protect its people, not wherever they may choose to be and do business, but rather when they choose to live here and contribute to our collective advancement. Even though there have been obvious flaws in the planning and execution of our withdrawal from Afghanistan, the maudlin propaganda for translators and refugees and missing Americans is the siren song of a cosmopolitan empire embarrassed by its incompetence.

This seems like bad news, but it is actually an opportunity. The American empire is corrosive to the historical American nation and its people. When the empire is not invading foreign nations and trying to remake them in our image, it is importing millions of refugees from the same nations it once declared to be enemies.

None of this activity accrues to the benefits of actual Americans, whose homeland is in bad shape and needs serious attention and effort. More time in Afghanistan, and more Afghans in our homeland, will not contribute to that important national priority.

Christopher Roach is an adjunct fellow of the Center for American Greatness and an attorney in private practice based in Florida. He is a double graduate of the University of Chicago and has previously been published by The Federalist, Takimag, The Journal of Property Rights in Transition, the Washington Legal Foundation, the Marine Corps Gazette, and the Orlando Sentinel. The views presented are solely his own.