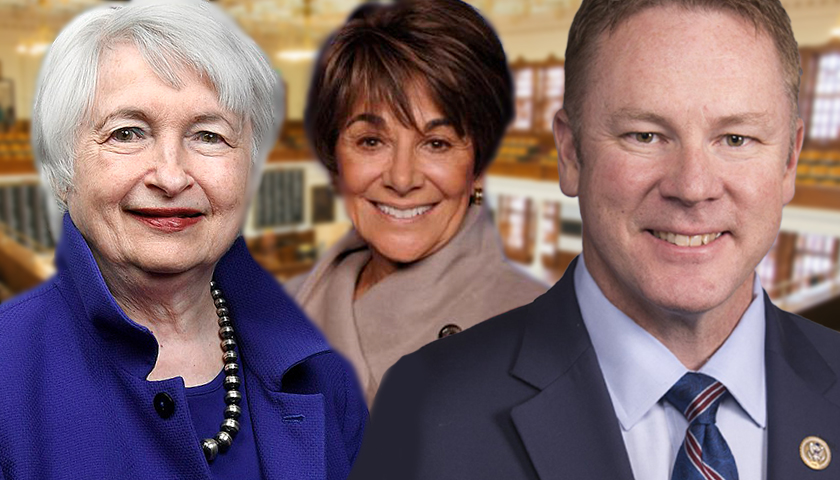 House lawmakers are set to return from recess Monday and will likely take up the $1.2 trillion bipartisan infrastructure bill the Senate passed last week — and with it, a controversial and last-minute cryptocurrency tax provision.

The bill contains a tax reporting mandate forcing cryptocurrency “brokers” to disclose gains and transactions to the Internal Revenue Service (IRS) as part of a scheme designed to help cover part of the infrastructure bill’s cost. However, the bill’s definition of “broker” has been criticized by the cryptocurrency community and pro-crypto lawmakers as vague, expansive and potentially unworkable, with many fearing it could stifle the industry and force crypto companies to collect personal information on their customers.

The provision defines a broker as “any person who is responsible for regularly providing any service effectuating transfers of digital assets on behalf of another person,” and forces brokers to report transactions to the IRS in a form similar to a 1099. This means brokers have to collect and report customer information such as names, addresses, and taxpayer identification numbers.

Opponents of the provision say the definition is too broad and could include software developers and “miners” — people who lend computing power to verify transactions in exchange for cryptocurrency — who don’t have access to that information.

“These entities do not have customers, they are not in the business of acquiring and safeguarding personal ‘customer’ information, and this provision makes it impossible for miners, software developers, and potentially even those engaging in DeFi [decentralized finance] to comply with the law,” Minnesota Republican Rep. Tom Emmer told the Daily Caller News Foundation.

The provision has the backing of the Biden administration, with Treasury Secretary Janet Yellen personally lobbying lawmakers earlier this month to object to an amendment by Sens. Pat Toomey, Rob Wyden, and Cynthia Lummis clarifying the proposed “broker” definition, The Washington Post reported. Yellen has previously advocated for more stringent regulation of digital assets, suggesting lawmakers “curtail” the use of cryptocurrencies, and characterizing them as little more than a means of tax evasion.

Today I urged Speaker Pelosi to amend the cryptocurrency broker language in the Senate’s infrastructure bill.

The legislation imposes new reporting requirements on miners, validators & developers of wallets who would be unable to comply with these requirements. #DontKillCrypto pic.twitter.com/TSmSL21D5z

“The bill will allow the Treasury Department to basically write whatever reporting requirements they want, and given that the department has been so aggressive, Congress really needs to assert its will here,” Ohio Republican Rep. Warren Davidson told the DCNF.

The Senate passed the bill without amending the provision, leaving it up to the House to address the controversial requirements.

“I’m very hopeful. There’s been a buzz on Capitol Hill, and lawmakers who otherwise would not be involved have taken an interest in cryptocurrency, especially on the Democratic side,” Davidson said.

The chairs of the Blockchain Caucus, a bipartisan group of lawmakers favorable to the cryptocurrency industry, sent a letter to every House member last week requesting they vote to amend the bill and fix the requirements. The letter, signed by Republican Reps. Tom Emmer and David Schweikert along with Democratic Reps. Bill Foster and Darren Soto, warned the tax requirements could threaten the growth of the industry as well as impinge on privacy rights.

“We must continue to oversee the regulators and ensure that they are committed to crafting a regulatory environment that reflects an understanding of the potential that crypto holds and encourages innovation,” Emmer told the DCNF.

Democratic Rep. Anna Eshoo sent a similar letter to House Speaker Nancy Pelosi last week urging her to amend the “broker” definition, describing it as “unworkable” and “stifling.” Democratic Rep. Ro Khanna told the Washington Examiner the bill “picks winners and losers,” while Republican Rep. Patrick McHenry said the provision would “hamper innovation” and vowed to fight it in the House.

I, along with bipartisan Blockchain Caucus co-chairs @RepDarrenSoto, @RepDavid, and @RepBillFoster sent a letter to every single Representative in the House raising concerns about the Senate infrastructure bill being paid for by our crypto industry. pic.twitter.com/MzsEmBbosr

Opposition From The Biden Administration

Despite vocal and bipartisan support for amending the bill, lawmakers face opposition from the Treasury Department and the White House, who are backing the provision because the vague definition of “broker” will allow greater flexibility when writing regulations, an administration official told Politico.

Davidson warned the administration could use the bill’s language to impose burdensome requirements that would hamper the growth of the industry and drive innovation overseas, as well as force companies and individuals to collect sensitive customer information to comply with the regulations.

“Some of the folks in the Treasury Department are working to stifle this industry in the United States,” Davidson said. “There’s a lot of people who have used the financial system as means of control and surveillance, and the idea that this new technology would prevent that is, in some cases, a complete threat to their business model.”

“We don’t want the Treasury Department to put some sort of regime in place that forces individuals exchanging cryptocurrencies peer-to-peer to start collecting personal information,” Kristin Smith, executive director of the Blockchain Association, a cryptocurrency trade organization, told the DCNF.

An anonymous Treasury Department official told Bloomberg last week the department is due to announce a clarification of its “broker” definition, potentially avoiding some of the concerns cryptocurrency proponents have raised. However, industry advocates say the vague language in the bill still leaves the door open for potential overreach.

🚨🚨The Senate is on the verge of passing legislation that would be TERRIBLE for cryptocurrency.🚨🚨

The infrastructure deal contains DANGEROUS provisions that would devastate crypto and blockchain innovation.

Supporters of crypto need to make their voices heard. https://t.co/iXrcnne0tV

“The definition should be specified in law rather than left up to the interpretation of the Treasury Department,” Neeraj Agrawal, director of communications at cryptocurrency think tank Coin Center, told the DCNF.

The Treasury Department has historically pushed for more aggressive regulation of the cryptocurrencies, and those in the industry fear a less charitable interpretation of the bill could threaten growth and innovation.

“We don’t want for them down the road to decide they’re going to change the definition,” Smith said.

“We would really like to see America’s history of innovation continue,” Alexandra Gaiser, director of regulatory affairs at cryptocurrency brokerage River Financial, told the DCNF. “This is an opportunity for another Silicon Valley.”

The White House has also publicly backed the provision, issuing a statement in support of another amendment proposed by Sens. Kyrsten Sinema, Mark Warner and Rob Portman that slightly clarified the reporting requirements but was nevertheless criticized by the crypto community as offering inadequate protection.

“The Administration believes this provision will strengthen tax compliance in this emerging area of finance and ensure that high income taxpayers are contributing what they owe under the law,” wrote deputy White House press secretary Andrew Bates.

This is not the end. This is a public negotiation.

If the Senate can’t get it done, we’ll fight it out in the House. #Crypto

Though there is support for amending the bill, lawmakers face procedural hurdles.

Speaker Nancy Pelosi has indicated the House could vote on the infrastructure bill along with the $3.5 trillion budget resolution without permitting amendments. Though Pelosi could review the infrastructure bill’s language, a House leadership aide told Politico, Rep. Davidson said it’s unlikely she allows the bill to be amended.

“We’re trying to work with a few senior Democrats to get some momentum going,” Davidson said, floating the possibility of additional legislation clarifying the “broker” definition.

The situation is further complicated by a rift among House Democrats as moderates push for a vote on the infrastructure bill before the budget resolution, against the wishes of Pelosi and more progressive members of the party. Democrats hold a narrow majority in the House, and can only afford three defections if all Republicans vote down the bill.

If the provision remains and the infrastructure bill is passed, crypto advocates say they’re prepared to work with the Treasury Department during the rulemaking process. However, they would prefer to resolve the problem with legislation.

“The Treasury Department is always going to be less understanding, and less willing to adopt new technology,” Alexander Leishman, founder and CEO of River Financial, told the DCNF.