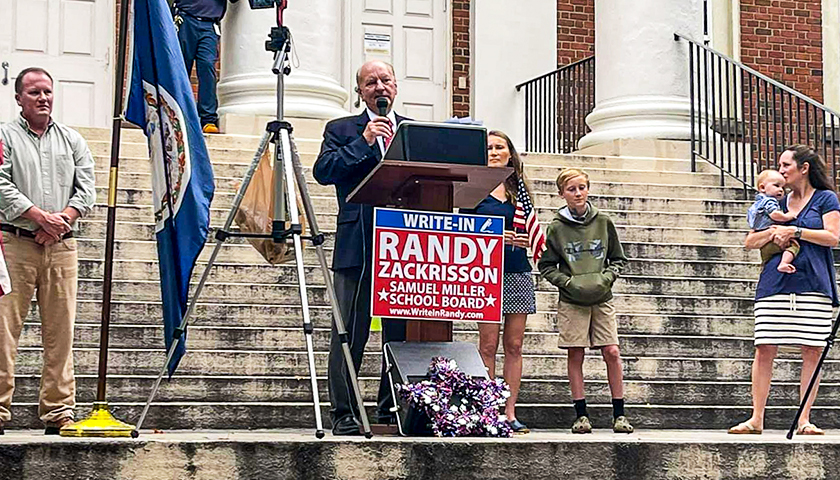 The Albemarle County School Board passed a transgender policy on August 12. Less than a week later on Wednesday, Albemarle resident Randy Zackrisson announced a write-in campaign to challenge board Chair Graham Paige in the Samuel Miller District.

“This is why I’m running for school board: to respect parental rights. To let the parents decide how to raise their children. That’s their responsibility, not the school system,” Zackrisson said in an announcement speech posted to Facebook by Philip Hamilton, Republican candidate for House of Delegates District 57.

Zackrisson said COVID-19, mask policies, vaccinations, and mandates have been major disruptions for the school district.

“At this critical time, you’d expect that our school board would be focusing all of their energy on developing creatively to try to recover the thousands of lost educational hours,” he said in the speech. “They wake up every day concentrating on masks. Instead, where has our school board been putting their energy and your tax dollars? Their priorities are focused instead on renaming the schools, compelling bizarre equity policies, and this is just not acceptable.”

According to his bio, Zackrisson served in the Ohio Air National Guard before he and his wife moved to Charlottesville, where their four children graduated from Western Albemarle High School.

Paige was first elected to the school board in 2015 after working as a science teacher, according to his bio.

Three school board members are up for re-election in November, including Paige, Kate Acuff, and Katrina Callsen. They’re the only Albemarle school board candidates listed by the Virginia Department of Elections, and all three are endorsed by the Albemarle County Democratic Party.

When asked about Zackrisson’s chances of success and the political background to his announcement, Urban said, “I can say, in general, that there is a groundswell of concern apparent among Albemarle voters regarding our schools. The concerns transcend traditional party lines. Mr. Zackrisson’s candidacy is an outgrowth of issue advocacy organizing among concerned citizens. I look forward to learning more.”

Zackrisson is part of a wave of locals across Virginia mobilized by political battles over equity initiatives, virtual learning, and transgender policy in the Loudoun County Public Schools district.

“Maybe it’s the Loudoun County stuff,” Zackrisson told Breitbart. “I think that’s how I started to get involved.”

Eric Burk is a reporter at The Virginia Star and The Star News Network. Email tips to eburk@vastarnews.com.
Photo “Randy Zackrisson” by Phillip Andrew Hamilton.