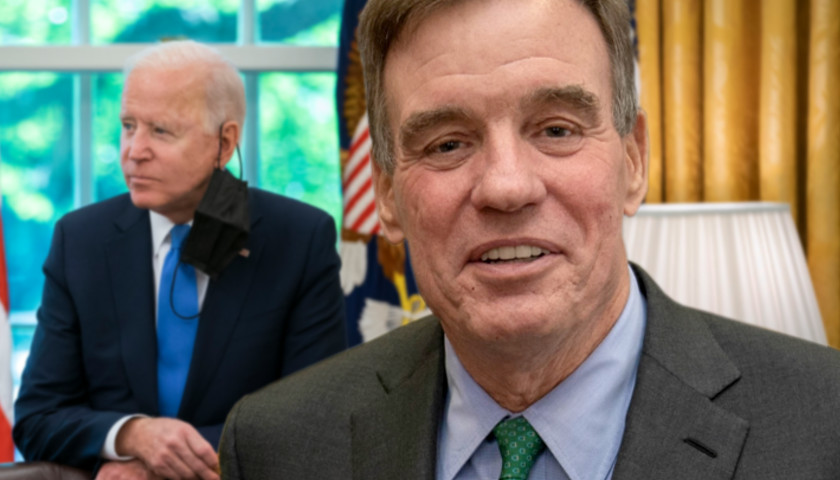 President Biden addressed the nation late Monday afternoon to discuss the ongoing national security and humanitarian crisis in Afghanistan. Some congressional leaders were furious at the Biden Administration’s lack of leadership on the issue. Congressman Jeff Van Drew (R-NJ-02), a former Democrat who switched parties in 2020, lashed out and called for the resignation of President Biden, Vice President Harris, and Speaker Nancy Pelosi. Senator Rick Scott (R-FL) hinted Monday that the Cabinet should consider invoking the 25th Amendment to remove President Biden.

The Virginia Star contacted both of Virginia’s United States Senators and all 11 US House members from the Commonwealth. While the offices of Senator Tim Kaine, Congressman Morgan Griffith (R-VA-09), and Congressman Don McEachin (D-VA-04) responded to The Star, others released statements publicly.

Senator Mark Warner (D-VA) (pictured above) emphasized the devastation of Afghanistan, but also highlighted the amount of money and lives spent during the post-9/11 U.S. involvement in the country.

At this moment, our top priorities must be the safety of American diplomats and other citizens in Afghanistan, and the extraction of Afghans who are at greatest risk, including those who bravely fought alongside our forces since 2001. The world must know that the United States stands by her friends in times of need, and this is one of those times. We must do everything we can to secure the airport in Kabul, restore evacuation flights, and allow our trusted Afghan partners to find safe haven in the United States or elsewhere before it is too late. We also cannot lose sight of the reason we were there in the first place and must continue to stay focused on potential threats to the United States posed by terror groups like the Haqqani network, al-Qa‘ida, and ISIS.

Warner said intelligence officials had anticipated that the Taliban would make gains once the U.S. left.

As the Chairman of the Senate Intelligence Committee, I hope to work with the other committees of jurisdiction to ask tough but necessary questions about why we weren’t better prepared for a worst-case scenario involving such a swift and total collapse of the Afghan government and security forces.

Senator Tim Kaine’s (D-VA) office, however, had no statement by press time.

Earlier today, the Taliban entered the Afghan capital of Kabul. We watched as the democratically-elected President was forced to flee the country. We watch as our Armed Forces continue to rapidly evacuate our embassy. And sadly, we will likely soon be forced to watch as the Taliban execute, maim, torture thousands of civilians, and forcibly marry thousands of Afghan women.

Wittman disputed statements that the Taliban takeover was inevitable, citing a July 8 statement where Biden said a Taliban takeover was unlikely. Wittman’s release quotes Biden saying, “There’s going to be no circumstance where you see people being lifted off the roof of… the United States from Afghanistan. It is not at all comparable.”

Wittman called the crisis Biden’s “Saigon Moment” and said it is “one of the greatest foreign policy failures in recent American history.” He noted that Biden ignored an alternate proposal to leave some special operators and advisors on the ground.

Congresswoman Elaine Luria (D-VA-02) posted on Facebook during the weekend:

We must ultimately grapple with the failures that led to the fall of Afghanistan to the Taliban, but today, in this moment, we must keep our focus on taking every possible measure to evacuate American citizens and our Afghan partners who fought bravely beside us for two decades.”

20 years ago, the United States entered Afghanistan to destroy the forces responsible for the terrorist attacks on September 11th, 2001. We largely finished that work when the Obama-Biden Administration killed Osama Bin Laden and degraded al Qaeda.

Scott also highlighted the cost of American involvement in the country, including billions of dollars servicemembers’ lives.

It is now undeniably clear that President Biden is correct when he asserts that the events of the last few days were inevitable. American troops cannot be asked to stay mired in an endless civil war and be asked to sacrifice more American lives and resources, when it is clear the Afghan government could not and would not stand on its own, even after 20 years of training and support.

Many partisan voices are looking to use this moment as a political weapon, while not acknowledging that President Trump legitimized the Taliban as a governing force and established the timeline for the withdrawal of American troops from Afghanistan.

Scott said that only a surge of American troops would have prevented a Taliban advance, and said the focus needed to be on protecting Americans and allies in the region, including through the Special Immigrant Visa process.

I  am concerned by the rapid fall of the recognized Afghan government and the repercussions that it will have for our allies and the overall stability of the region. There will be time for recriminations and justified tough questions on how this happened. For now, we must focus on the safety and security of the thousands of American troops being redeployed to Afghanistan to secure Hamid Karzai International Airport in Kabul as well as U.S. embassy staff, civilian personnel, and our Afghan partners who have stood with us and aided U.S. operations abroad.

Over the past few weeks, Fort Lee in Central Virginia has served as a processing center for thousands of Afghan interpreters and their families, as they fled threats of retaliation from the Taliban and work to finish their Special Immigrant Visa processing. I will continue coordinating with the Biden administration, the State Department, and the Department of Defense to ensure these processes continue smoothly and our facilities remain ready for any additional needs.

Congressman Bob Good (R-VA-05) had not released a statement by press time. Good was one of 16 members of the US House to vote against accepting refugees who assisted the US military in Afghanistan.

The haphazard withdrawal of American troops has led to a diplomatic and humanitarian disaster in Afghanistan. As the Taliban have now taken Kabul and the flag over our Embassy has been lowered, refugees are pouring into neighboring countries adding to the instability of the region. The President owes the country and explanation as to the failure to ensure peace and safety of those who aided in the war effort. The American people deserve a plan that preserves the human rights gains made for Afghan citizens and makes certain the sacrifices of those killed and wounded was not in vain. Congress must immediately open an investigation into how this catastrophe occurred and how we hold those responsible to account for the tragic events of that are unfolding as a result.

Although Rep. Abigail Spanberger (D-VA-07) had not made a statement to the media by press time, she has voiced support for the withdrawal of troops from the middle eastern country.

Our mission in Afghanistan was never supposed to be nation-building.’ Exactly right. The people who want to keep us in Afghanistan would have us stay there for years to come, which would be a huge mistake.

He reacted to Van Drew’s call for the resignation of Biden, Harris, and Pelosi:

Republicans in Congress engaging in hysterics after supporting a President who tried to end our democracy — and who made the agreement with the Taliban, which most of them supported at the time, that set these events in motion — are embarrassing themselves. This is cringe-worthy.

Beyer said the most important thing now is to evacuate Americans, allies, and high-risk Afghans.

Congressman Morgan Griffith’s (R-VA-09) released this statement to The Star on Monday:

While I have supported an orderly withdrawal of our troops from Afghanistan, President Biden and his Administration have botched America’s exit.  The problem was not withdrawing American troops, but that the President’s team did not have an adequate plan to see it through.

Due to a gross misjudgment by the Administration, we now have Americans and Afghan allies who are unnecessarily in harm’s way. It has been necessary to deploy additional troops to address the chaotic situation in Kabul.

Congress knew this would not be a seamless exit and passed legislation to help better prepare for the transition. As early as June 29, I voted to streamline the visa process.

Griffith said he had participated in a call with administration officials, where he learned that some visas for Afghans who helped the U.S. still needed to be processed.

He asked, “Why on earth would the President remove troops before guaranteeing the airport and embassy would continue to be secure, the visas were processed, and US nationals and allied Afghans were safely evacuated?”

I am deeply concerned about the situation in Afghanistan. We must ensure our Afghan partners on the ground, who have helped us immensely throughout the years, are evacuated and protected.

What we are witnessing in Afghanistan is deeply concerning. As I said in May, the situation has an eerie resemblance to the end of the Vietnam war. The Biden administration must use all possible means to ensure diplomatic and military personnel, as well as Afghan allies, especially our brave interpreters, are evacuated safely.