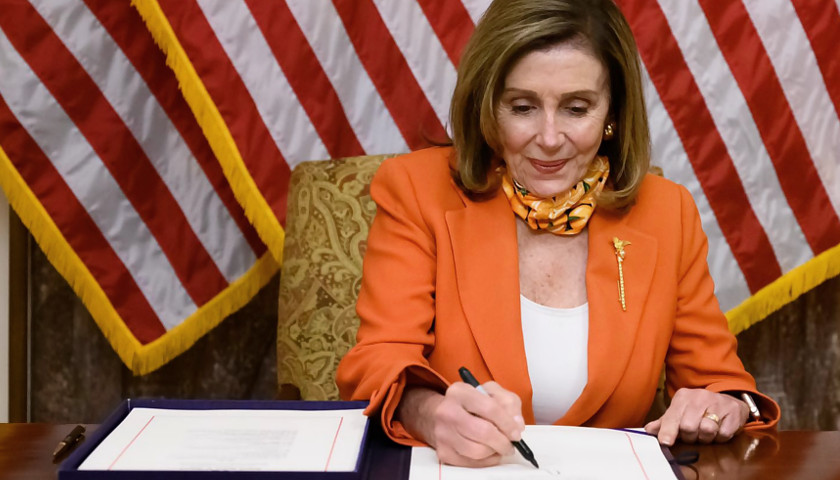 Pelosi asked the House Rules Committee to look into the possibility after nine centrist Democrats vowed to block the budget if it came up for consideration before the infrastructure bill passed.

“I have requested that the Rules Committee explore the possibility of a rule that advances both the budget resolution and the bipartisan infrastructure package,” Pelosi said in a Dear Colleague letter Sunday. “This will put us on a path to advance the infrastructure bill and the reconciliation bill.”

The California Democrat previously said that she would not bring the bipartisan bill up for a vote until the House passed the budget in an effort to appease progressives. Many have been critical of the infrastructure package, which puts $1.2 trillion toward roads, bridges, ports, drinking water pipes and broadband internet access, arguing that it does not go far enough and pledging to tank it unless the budget passes first.

The group of nine said Sunday night that they appreciated Pelosi’s efforts, but that they were not going to change their position.

“While we appreciate the forward procedural movement on the bipartisan infrastructure agreement, our view remains consistent: We should vote first on the Bipartisan Infrastructure Framework without delay and then move to immediate consideration of the budget resolution,” they said in a joint statement.

The Senate passed the infrastructure bill with 69 votes Tuesday and adopted the budget framework on a party-line vote early Wednesday morning. Both are waiting to be taken up by the House, which is on recess until Aug. 23.

While Democrats hold a House majority, it is the narrowest in decades, and they only have three votes to spare if Republicans vote unanimously against either bill. As a result, both the progressive and moderate factions are large enough to tank either package, giving Pelosi little room for error.

Majority Leader Chuck Schumer faces similar hurdles in the Senate, where Democrats have a majority with Vice President Kamala Harris’ tie breaking vote and where moderates have come out against a budget totaling $3.5 trillion.