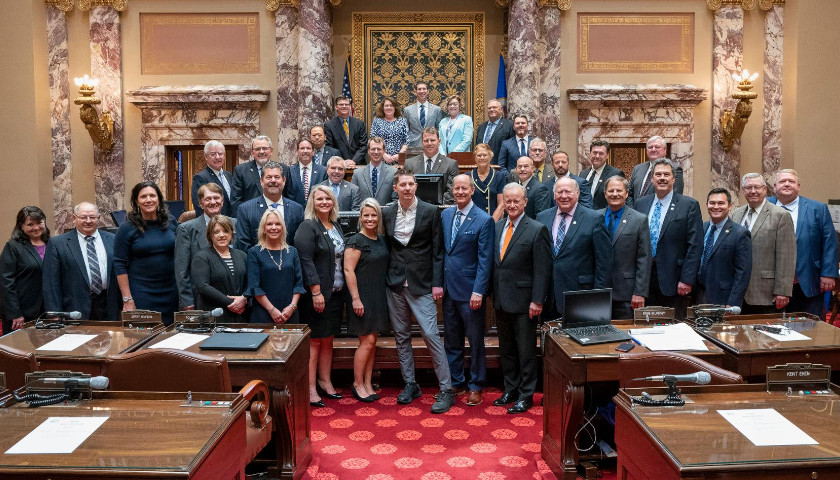 According to Minnesota State Senator Gene Dornik, the Senate Democrats asked Republicans to remove their Thin Blue Line lapel pins that symbolized their support for police officers. The Democrats made the request under the Senate rule that prohibits advocacy. The Thin Blue Line symbol has been criticized in other public venues as well. In Maryland, a judge banned court employees from wearing Thin Blue Line face masks, citing “bias.”

Senate President Jeremy Miller, R-Winona, said that he had gotten complaints about the pins being worn. “There is a long-standing custom of the Senate for members not to display visual advocacy while we’re on the Senate floor,” he said when announcing that the pins needed to be removed.

Senator John Jasinski, R-Faribault, handed out the pins to the Senate members when they honored Officer Arik Matson. He said, “All this was done on the day that I recognized Arik Matson and his wife Megan for Arik being named Minnesota Police Officer of the Year (2020).” Matson was shot in the line of duty and underwent 8 months of rehabilitation.

Jasinski wrote in a public statement, expressing his disappointment with having to remove the pin. “To be fair, Senate rules prohibit advocacy. However, that rule is seldom invoked, especially for subtle gestures of support. IN FACT, I have been in the Senate for 5 years and there have been hundreds of different lapel pins worn by both parties.” Senator Gene Dornik agreed. “Since I started in the Senate, I have seen many different lapel pins worn by both parties.”

Jasinski said that he would remove the pin, but he would not apologize for handing them out.

“I’m just simply going to state, I gave out pins in respect for my law enforcement officer today when he was being recognized as the Minnesota Police Officer of the Year for 2020,” he said.

Hayley Tschetter is a reporter with The Minnesota Sun | Star News Network and The College Fix. She graduated with a degree in Communications from the University of Northwestern-St. Paul. Send news tips to hayley@volente.biz.
Photo “Minnesota Senate Republicans” by Senator Gene Dornink.